Wild camp on the Old Man Of Coniston

A couple of weeks ago I did a wild camp on the Old Man Of Coniston, a location I had wanted to wild camp at for so long. A few years ago I tried walking the Coniston Round with a bunch of friends but got battered back by winds on Swirl How and had to turn back. I had never made my return to get to the summit and it was something I had longed to do. As coincidence would have it my friend Joe who I often wild camp with also once had to turn back on a different walk he did and also had felt defeated for years. We had been planning our return for some time, but as ever it can be one of them things where procrastination is so easy.

We had penciled in the date in the diary and suggested we did this, with every wild camp we had been ticking our must do’s off one by one and now only have one location left (after this one)! We have to admit, we’ve been lucky so far being able to produce images from each camp and not really having a rough night with the weather. I hope that continues.

What made it even more exciting for me was the fact I had just got my new camera, the Sony A7R. I had always longed for a full frame camera, though I was always a believer in that if like me you’re a landscape shooter then really you’re not going to benefit that much. The Nikon D800E was the only camera that had tempted me, due to it’s 36mp sensor and lack of AA filter showing a clear advantage over a 24mp APS-C sensor. However to go for a system like this with 2 lenses would set you back nearly £5k, the price of a decent second hand car. Professional photographer or not, this is a lot of money. The other thing that put me off was the weight, I had become akin to my Sony NEX-7, a camera that produced high quality images in a small package, it didn’t make sense to go heavier especially when wild camping. Cue the Sony A7R, a camera which for me (and many it would seem) has hit the nail on the head. I don’t endorse Sony in any way by the way but it’s light, offers full frame, the same sensor spec as the D800E (although a redesigned sensor so possibly even better?) and costing a lot less than the D800E. It was perfect and I decided to pre-order right away.

The only problem being that selection of lenses so far aren’t great for the A7R, but I know that if I didn’t buy the camera now it could possibly be out of stock for some time. Another friend who also owned a Nex 7 very kindly leant me a metabones adapter that would allow me to mount Canon EF lenses on the A7R and give me full frame coverage. He suggested the 17-40 f/4 L and I managed to pick one up at a steal with a view of if it wasn’t good enough for the sensor that I could sell for what I paid.

Anyway back to the wild camp, we decided to get there early to ensure we had plenty of time once at the summit and after a quick call in at Ambleside we arrived at Walna Scar Car Park around 10:30. I wasn’t sure if I’m honest if it would be safe to leave the car there, thinking that if I left the car in Coniston it would be much safer but decided it was high up and far enough up out of the way and should be safe. It had the added advantage of cutting a fair chunk of ascent out of the climb.

The forecast for the weekend had been for virtually no wind with blue skies both days. However, Saturday was cold, grey and quite windy.

As with most wild camps carrying as much weight as you do I chose to walk the “tourist path” up which is well paved and the most direct route. It may be a tourist path but it is a fine path passing by the lovely Low Water then up the steep zig zags to the summit. On the east face there was a dusting of snow which was a nice added touch. Walking up we set a fair pace, often overtaking people and while I am no where near the fittest person in the world it’s always nice when you don’t struggle on a walk when wild camping because sometimes it can be torturous. I’ll probably put this down to the good paths over anything. We reached the summit at around 12:30 and it was extremely busy. Icey patches on top and blowing cold winds, a lot of people were huddled around eating their lunch and it was quite obvious we had got up there too early but it’s better to be early than late. While I know how popular the Old Man Of Coniston is it really surprised me at how busy it actually was given the conditions and the fact there was ice about. We even saw a small three legged dog (poor thing, although it looked to be enjoying it) and people carrying up babies (again poor things!).

Getting there early did have one advantage, we were able to catch a rainbow as passing rain kept getting swept by the winds. 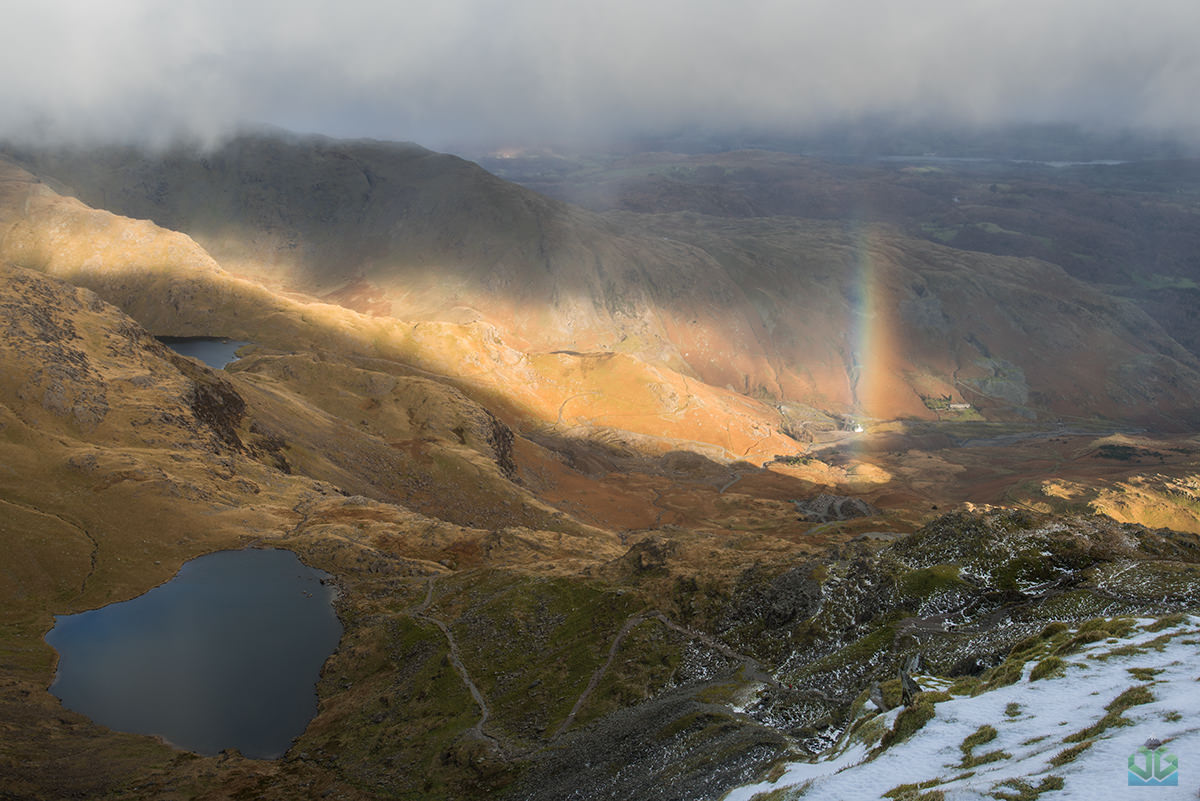 While it was great to see, by this moment in time I was starting to wonder what I was doing. Feeling rather cold and knowing it would go dark at 4pm I knew it was going to be a long night, so what better to do than crack the MSR pocket rocket out and heat up what I perceived to be my genius idea. I’m not a whiskey fan so I can’t use that to warm me up on the hill, instead I had spotted some Winter Spiced Cider in the shop the night before and warmed that up. Yes it was 1kg more to carry a litre of it, but trust me it doesn’t have make you feel better having something warm when you’re that cold.

About 3pm it was obvious that it wasn’t going to clear up for sunset and the summit had started to die down a little, so we decided to pitch our tents. We found a small patch of soft grass just a minute from the summit and pitched here. Frustratingly I had found that my tent wasn’t quite right. I wasn’t sure how I had managed to pitch it so many times before but basically one of the straps was sewn into the wrong part of the tent not allowing me to erect the small pole properly which I had to jab into the ground instead. I had returned it once already back in March because before because the strap wasn’t sewn in at all and it was evident that they had sewn it back in the wrong place. Luckily, I only live around the corner from the manufacturer and they were very apologetic and sewn it correctly while I waited. Hopefully going forward there will be no more drama.

Most people ask how do I spend my time with such long dark hours in the winter when wild camping? I guess it’s all about the little luxuries really. Making sure you are warm is obviously top priority, having a good sleeping bag, warm clothes including a down jacket, hat and gloves all help. Usually I’d take a flask but realised I didn’t know where it was after recently moving house, but the hot cider and hot food kept me warm. I also took a Kindle with me which kept me entertained. The clag was still in and it was obvious it wasn’t going to be a long night. It didn’t look very promising for the next morning. Even around 5pm there were still people at the summit, way past sunset which surprised me. They were pointing at us, I think probably noting “how mental they are”. In truth the night hadn’t been as bad as I thought, I reckon it only got to about -3 and once inside my tent, closed up I was really warm and slept one of the best wild camping nights I had.

The next morning I woke up and it still didn’t look very promising with a lot of cloud about. Even after all that sleep it was still tempting to stay in bed, but I forced myself out, got my gear and headed to the summit and tried to keep warm.

After about 20 minutes, we could see a small gap just big enough for the sun to squeeze through and hoped the wind wouldn’t blow the clouds and cover the gap. Very much fortunately for us, the gap actually widened and treated us to a glorious light display. We were blown away, there was such a clarity in the air too meaning visibility was excellent. In fact, we figured out that we could see North Wales which I confirmed later by looking at a computer generated panaroma. In fact we could see Snowdon, 98 miles away!

Here are the resulting images:

This first image is what I had gone up for and I knew I wanted it at sunrise. It was absolutely gorgeous light, creating amazing textures and depth to the scene. Here you are looking down to Low Water, you can just see Levers Water behind, Swirl How to the left and Wetherlam roughly in the middle. In the far distance is a snow capped Helvellyn. 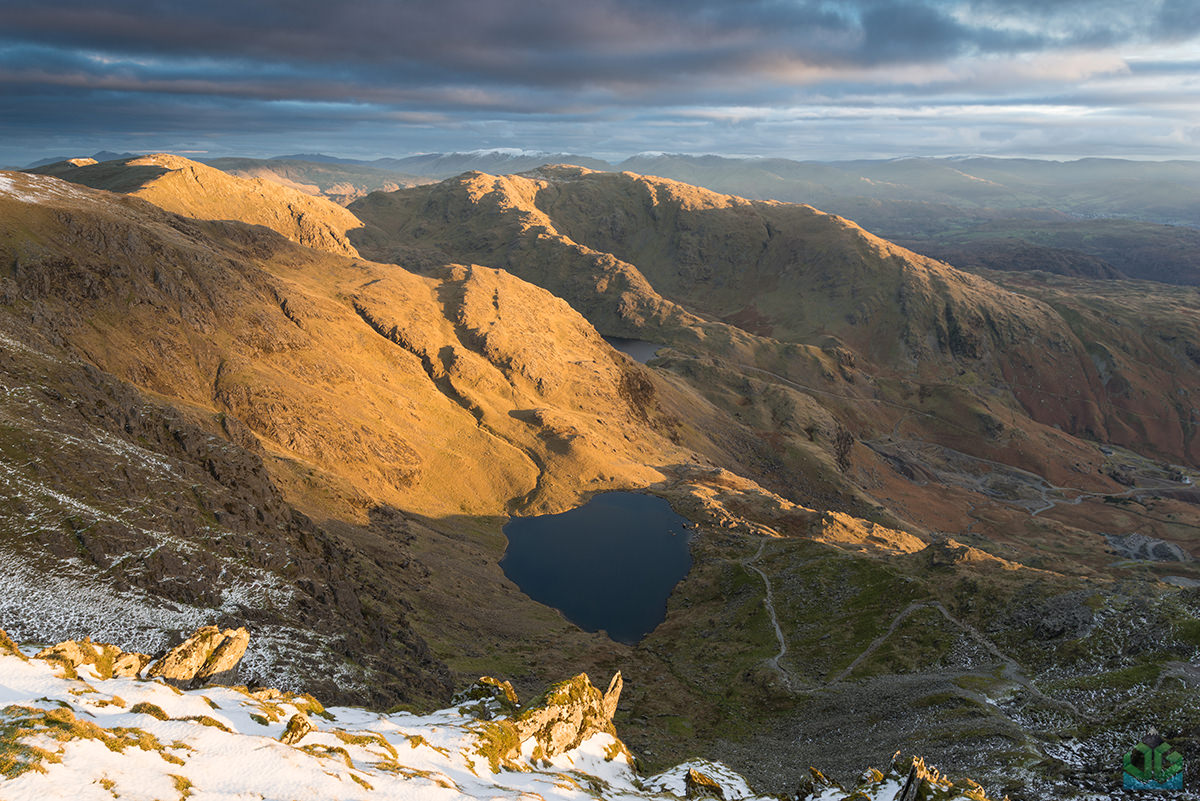 The next image is of Dow Crag, perhaps the most impressive face in the Coniston Range. Taken from just below the summit of the Old Man of Coniston: 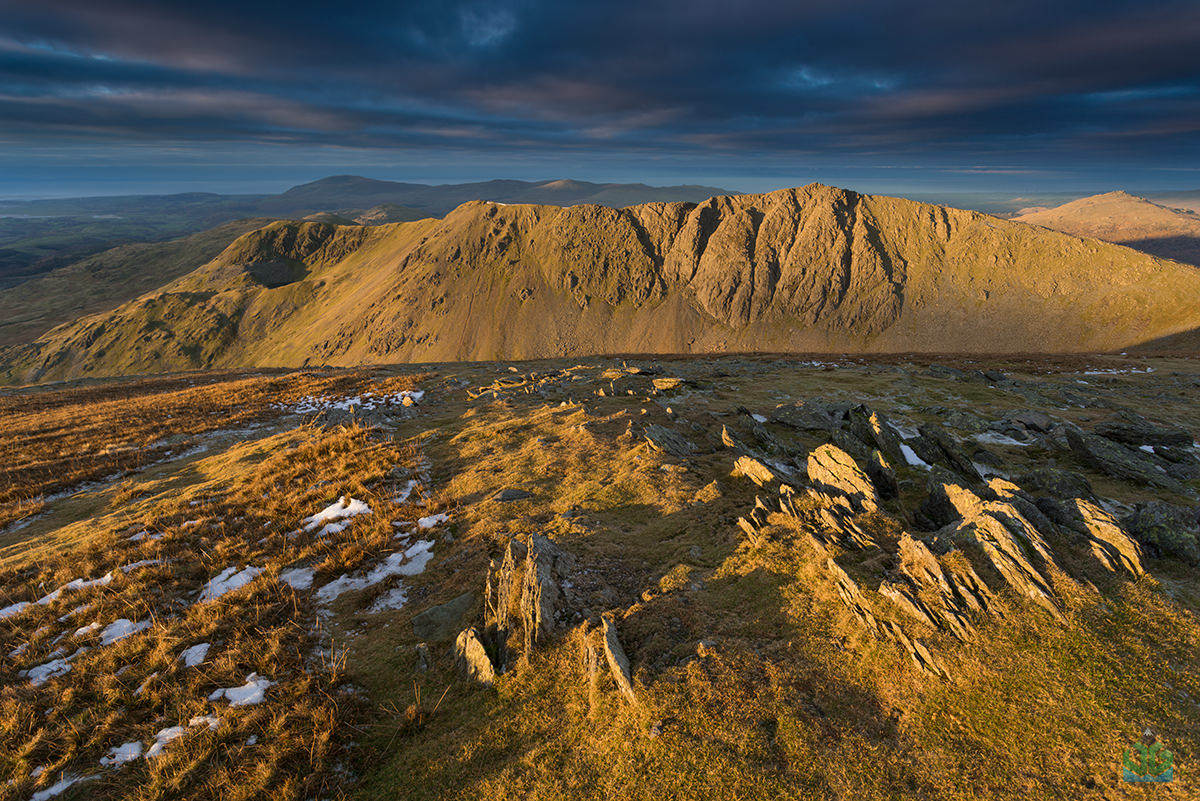 The next image is of the trig point looking back over the Coniston Range with Sca Fell and Scafell Pike to the left. I don’t usually take pictures of trig points but this one is quite nice: 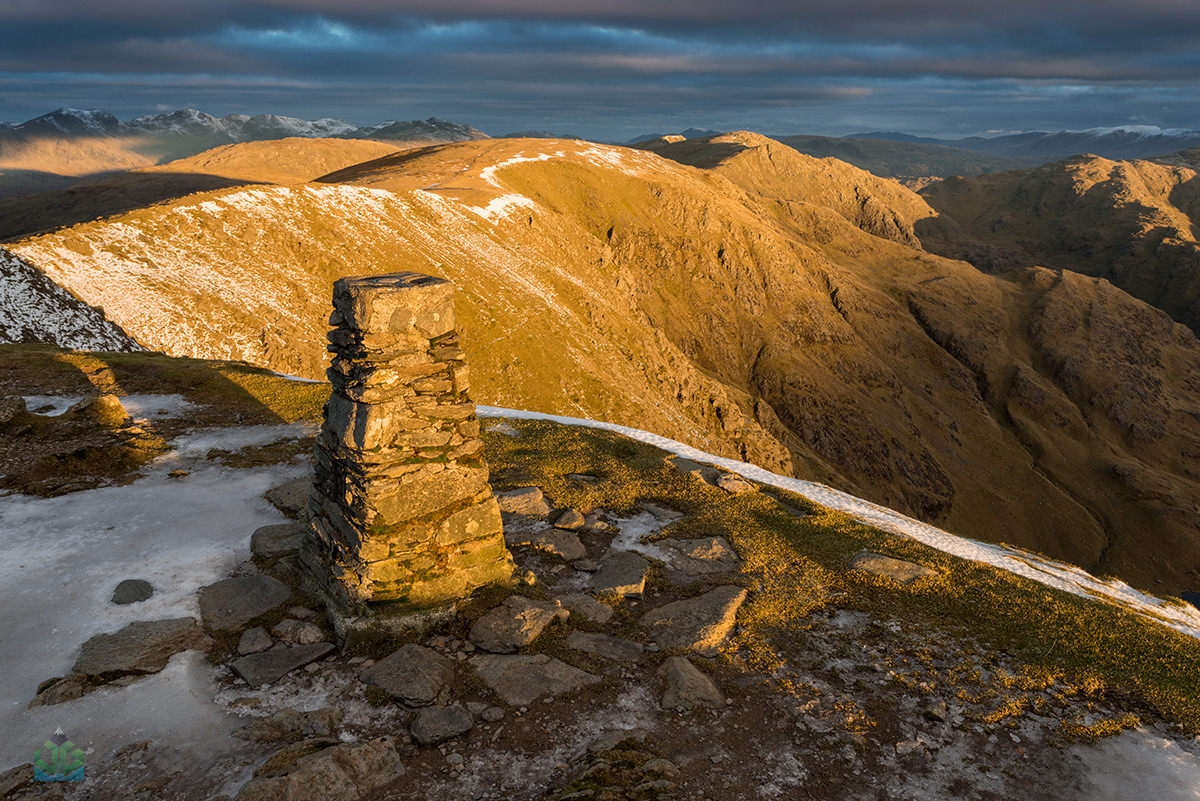 The next one is an image that caught my eye. The expansive views over a reflective Coniston Water and Windermere in the distance all being illuminated by a shaft of light. The green fields at the bottom of the valley also really caught my eye with the textures: 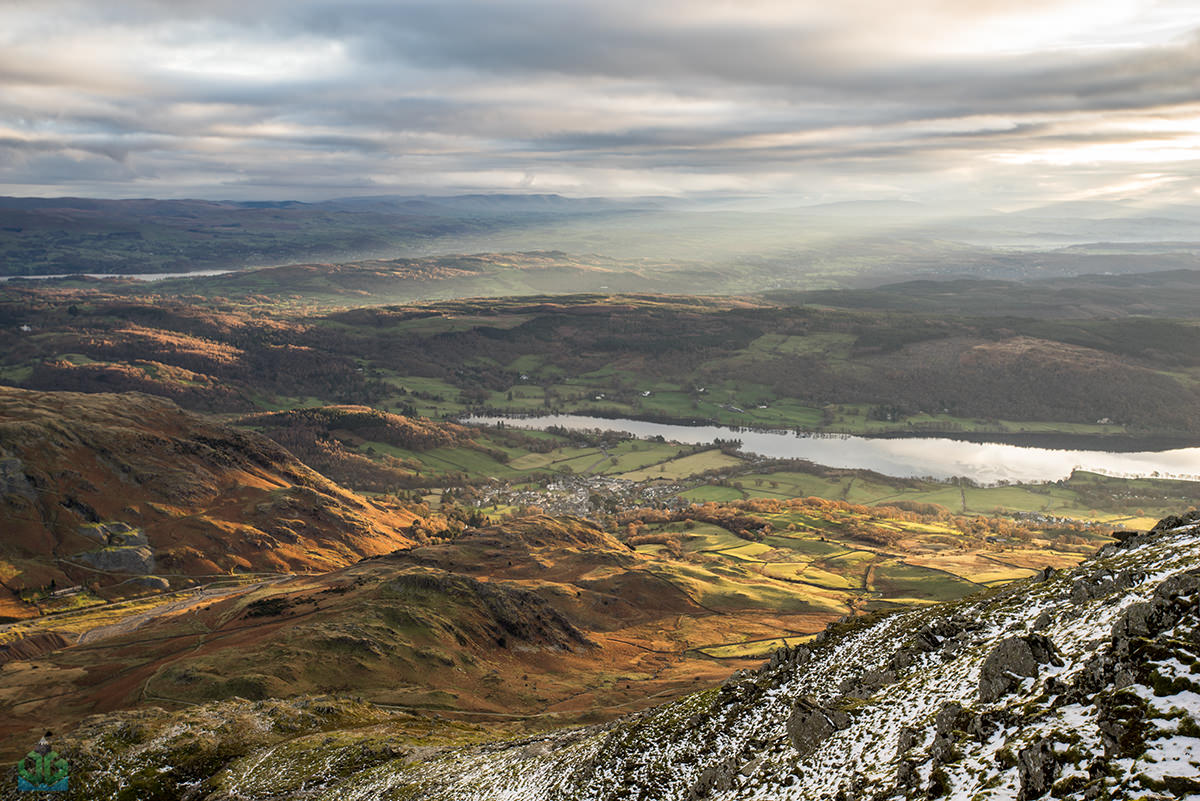 Of course, what would a wild camp be without a photo of the tents? 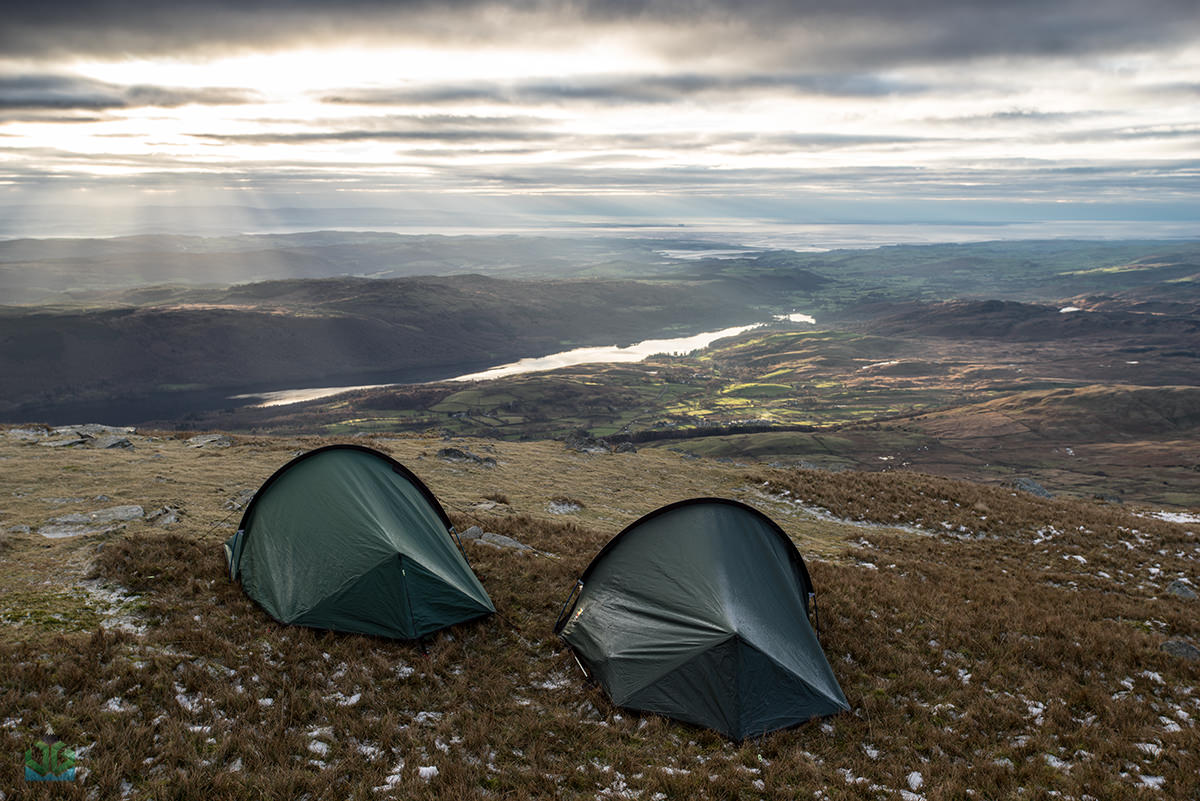 After spending 21 hours at the summit it was a tricky descent initially down the icey steps, I had elected to leave the microspikes in the car and being the first down after a cold night had meant that everything had iced over again. Lesson learnt but I was soon in Coniston for a breakfast cob (bap/roll/bread cake ;) )

Overall, it was a very good wild camp. I really enjoyed it and enjoyed sharing my images with you. It’s only taken me so long to post them because I was waiting for the new version of Lightroom to be released which supported the A7R. Speaking of which, for those of you that wanted my thoughts on the camera so far I’m really enjoying it. It’s a lot like the Nex 7 but better in so many ways. They’ve got rid of a few of the minor irritations of the Nex. The image quality is nothing short of fantastic, it simply wow’s me (and everyone i’ve shown 100% samples to) with such resolution and detail, there almost seems to be a 3D effect to images. This is the first camera I’ve ever used where I’ve felt that the images are life like in sharpness and thats with the Canon 17-40 f/4 L. I can’t wait for the native lenses to be released.

Anyway, thank you for reading my ramblings once again :)