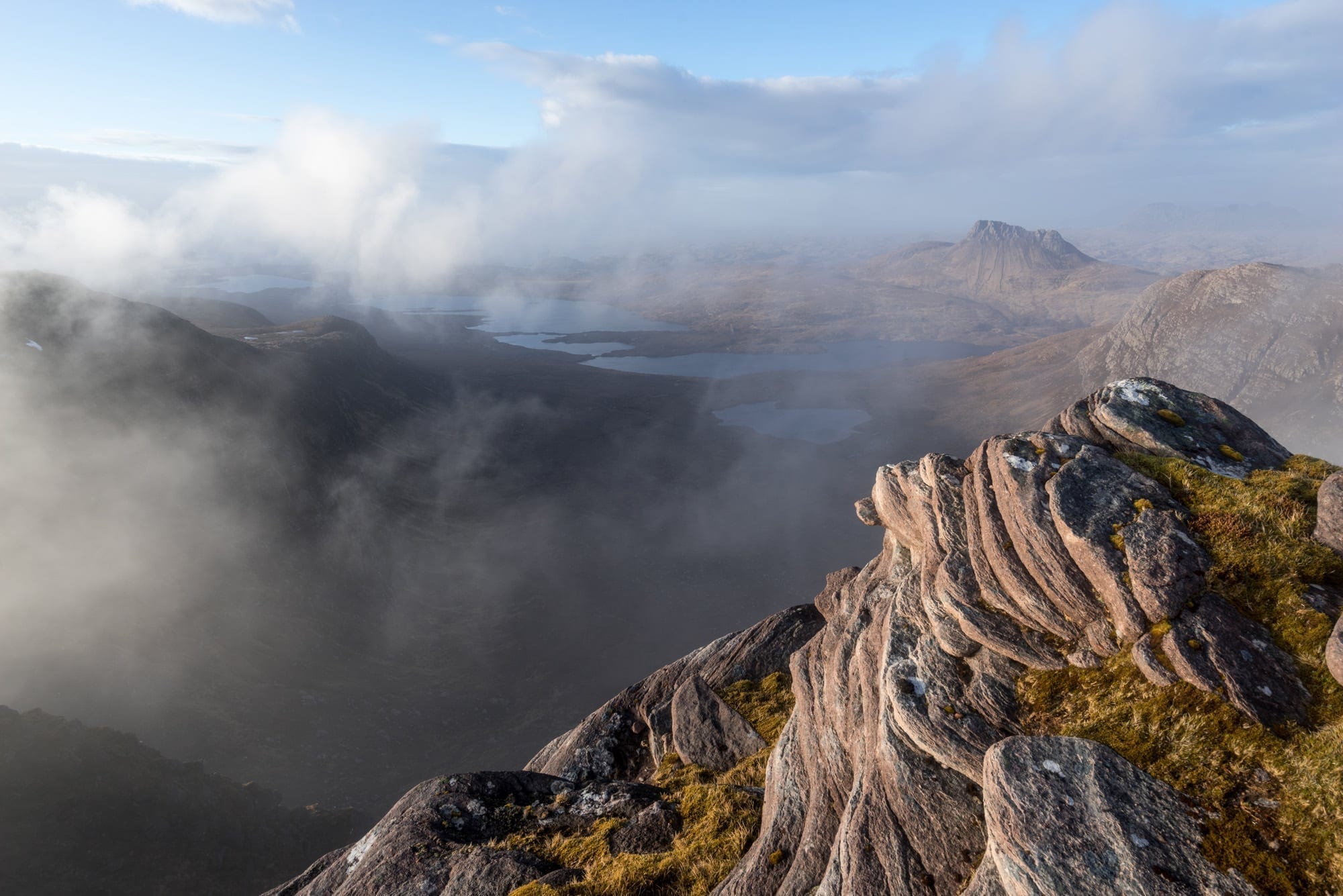 So, I’m a little late to the party writing this blog. It’s now the 5th of January and no doubt you’ve seen and read many photographer’s blogs or posts on their favourite images of 2016. The truth is, I was away in Scotland until the 2nd January and since then I have been trying to catch up.

2016 for me is a funny year to look back on. On a personal level it wasn’t the best but it has hopefully opened some new doors. You know the saying. But this isn’t a place to talk about my personal life, so on to the year in review.

I’ve seen a lot of posts and blogs showcasing their favourite 10 images of 2016, I’m not sure where this come from and how official it is but I’m not going to go down that road. How do I choose 10 images? Do I pick personal favourites, choose what I think are the best (there’s a difference between the former and latter) or do I just simply showcase my most popular as perceived by social media? I’m not sure.

So I had been thinking about this blog for some time now and how I would write it. I’ve done them before and I wanted to just do something a little different. One thing stuck in my mind and to me that’s perhaps my favourite experiences of 2016, photographically speaking anyway. I’ve done a lot of photography in 2016 and in some cases probably upped my game, but a lot of the images I like the most won’t even get a mention.

I’ve captured new parts of the Peak District (rare for me), bettered old images, been to Dorset and Cornwall which was fantastic and photographically a very different experience for me and had some pretty good light along the way.

But, what sticks in my mind? Well, mist especially in the mountains is one thing that has stuck in my mind. I’ve had a few instances in 2016 where I headed up a mountain accepting before I set off it wouldn’t be anything spectacular to then be welcomed by breaking clouds or passing mist. I love mist, who doesn’t? But when it goes from nothing to amazing scenes of sun poking through mist or it being side-lit by the sun, it’s just a moment on the hill where I feel that little bit more excitement than most times.

It started off in Assynt, Scotland. Me and my girlfriend, Sarah made our second ascent of Stac Polliadh (or Stac Polly as most call it) and we had stood around. We had some fairly nice light, some snow storms and then got covered in clag. It looked like it was almost over at this point and I waited around at the bealach with Sarah and considered heading down. Not one to be defeated though, we waited around and as luck would have it the mist started to clear. Sarah stayed down at the bealach and captured a fantastic photo. I had to rush back up to the Eastern summit, caught out by this sudden break and managed to fire off one shot before it all went again. It was amazing to see, nevermind photograph, the strong sunlight being diffused by the mist and views to the lochs below.

If I were going to critique myself on this one, I might choose to re-process it a little less warm and I wish I had more time to fine-tune the composition. However, I’m still glad to have had the opportunity to witness this: 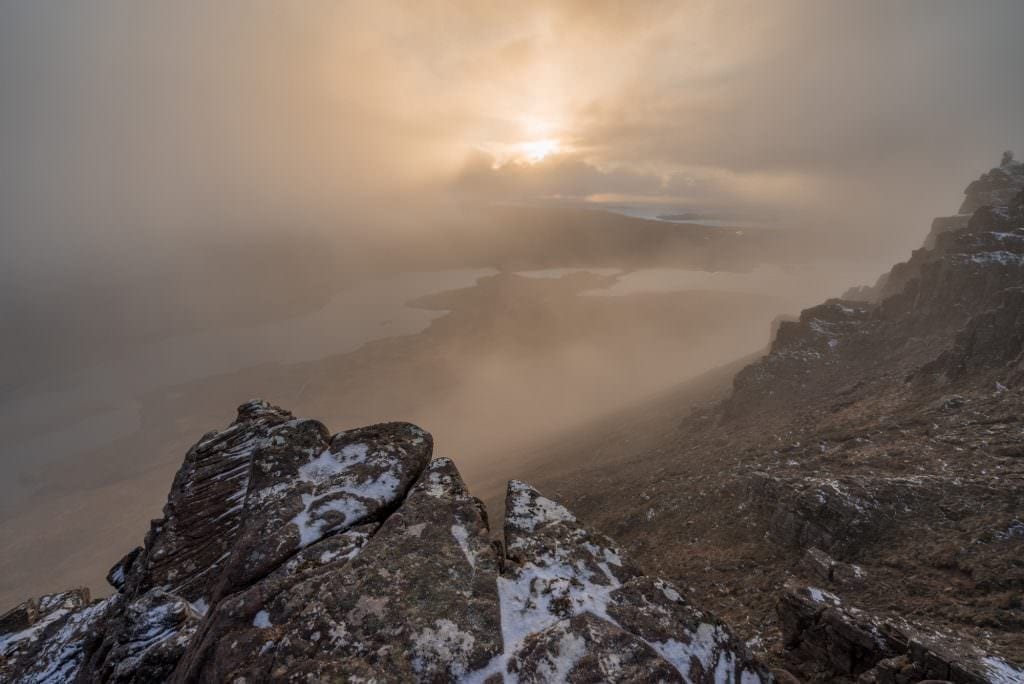 Next, we’re back at Assynt. This time from our second visit in March. All week it had been pretty poor weather wise, flat grey skies and cloud-capped mountains. I had wanted to capture a view from Sgurr An Fhidlheir (The Fiddler) looking over to Stac Polliadh. We attempted it on one day but unfortunately had to turn around. The next day, I set up off on my own and it was still pretty drab. The forecast suggested sunshine and showers but I wasn’t convinced, there were certainly showers on the way up though. I wasn’t bothered though, after a week of not doing much I was determined to at least get up a mountain. I love photography and capturing the moments, I get frustrated when it doesn’t happen but I do have to try and tell myself from time to time I’m also a walker and to just enjoy being out there, some people won’t ever get the chance and others don’t realise what we have.

I got to the summit and I was thick in clag, though I could see hints of brightness. It was also very windy. I had arrived in plenty of time and thought I would wait around for the golden hour to come. I phoned Sarah to let her know I was at the top and safe and while on the phone the cloud started to break up. It was unexpected and a magical moment. The views over the lochs to Stac Polliadh and Suilven were amazing and I was made up.

It wasn’t the golden hour but I didn’t care. The light was pretty good, fresh looking in fact and by the time golden hour started the best of the mist had cleared up. I managed to capture this shot and if I’m to name one image as my favourite from 2016, it would have to be this one. 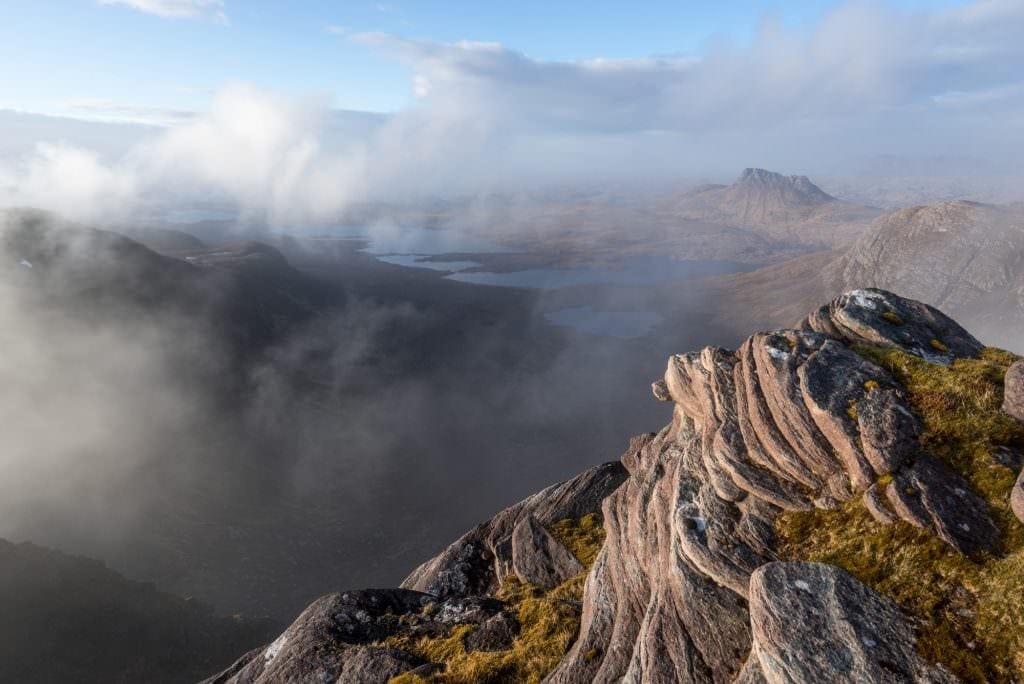 Next we’re off to the Brecon Beacons. It was my first visit here and of course we just had to climb Pen-Y-Fan. It was one of them mountains on my list for years but for me the Brecon’s is quite far away especially compared to other National Parks. But, we had a reason to be in the area and made the most of it. We made it a hill-walking day but took our camera’s anyway. It was lovely in the day with broken cloud but started to clear up. With a nip in the air, Sarah decided to head down and I stuck around. I jumped from Corn Ddu to Pen-Y-Fan a few times, working with the light as it changed, finding new compositions.

What caught me by surprise though, is while on Corn Ddu photographing a composition I had spotted on our ascent was a mist that rolled in from behind me. It made a rather boring sky something rather special with the mist getting hit by the sun. 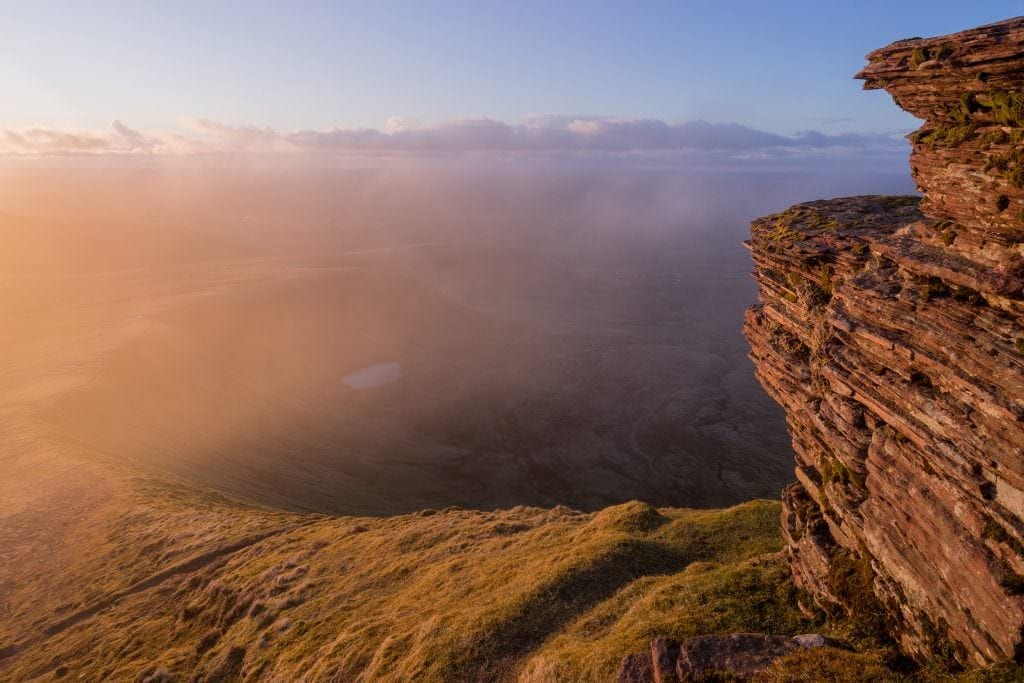 Next, I’m just going to chuck a cheeky shot in. It’s not a mountain image and one from Dorset at the ever popular Durdle Door with hardly any mist. Despite being summer, it had been a foggy day most of the day with breaks in the fog while we were at Bournemouth to reveal scorching temperatures. Our last night before heading to Cornwall I almost insisted we go to Durdle Door one last time as I still hadn’t got a sunset shot I was really happy with.

Walking down, the fog kept rolling by and actually made the strong summer sun quite diffused. I jumped into a spot Sarah had shot the previous year and admittedly, I was inspired to use her composition of a panoramic looking across Man O’War bay and Durdle Door, The fog made the image hazy, although it had almost completely burnt off and in the end I came back with an image I actually rather like despite being such a well photographed location.

Lastly is from a visit to Snowdonia. I had been up the Glyder’s back in April to try and capture something and thought my luck would be in once again and mists kept passing but unfortunately the sun didn’t want to play. So, after getting itchy feet having not done a wild camp for a while, due to an accident injuring me I set back out to Capel Curig to see what I could do. Setting off, the forecast was promising but as ever, the forecast changed last minute and predicted flat grey skies and even some rain. To make matters worse, I dropped my wallet in a Tesco on the way but decided to carry on anyway as Tesco had found it and put it in lost property.

On arriving at Capel Curig, it was grey. flat and boring. I may have even had a little sulk and felt like not bothering. But I had driven 3 hours and what was I going to do? Just turn around and go home? Nope. After having a word with myself, I decided to go up anyway and again try to enjoy just being out the mountains. What a right decision it turned out to be!

Again, I was fortunate to get there in plenty of time and once again clag started to break and the sun broke though. I caught a few images I had in mind but what I wasn’t expecting was to be shooting Castell Y Gwynt at sunset as I had marked it for sunrise.

However, having finished at Bristly Ridge I turned to my left and saw a thick fog clinging the tops with the sun just poking through. I had to rush across the ankle breaking boulder field, shooting a couple of shots along the way in case it disappeared and got to where I wanted to be literally in the nick of time. I shot one shot that I knew I liked but I was in such a rush I wasn’t sure I had got it in focus.

Luckily I had and it’s this shot of Castell Y Gwynt (Castle of the Winds) looking into the setting sun before vanishing for the night. Another image I really quite like. 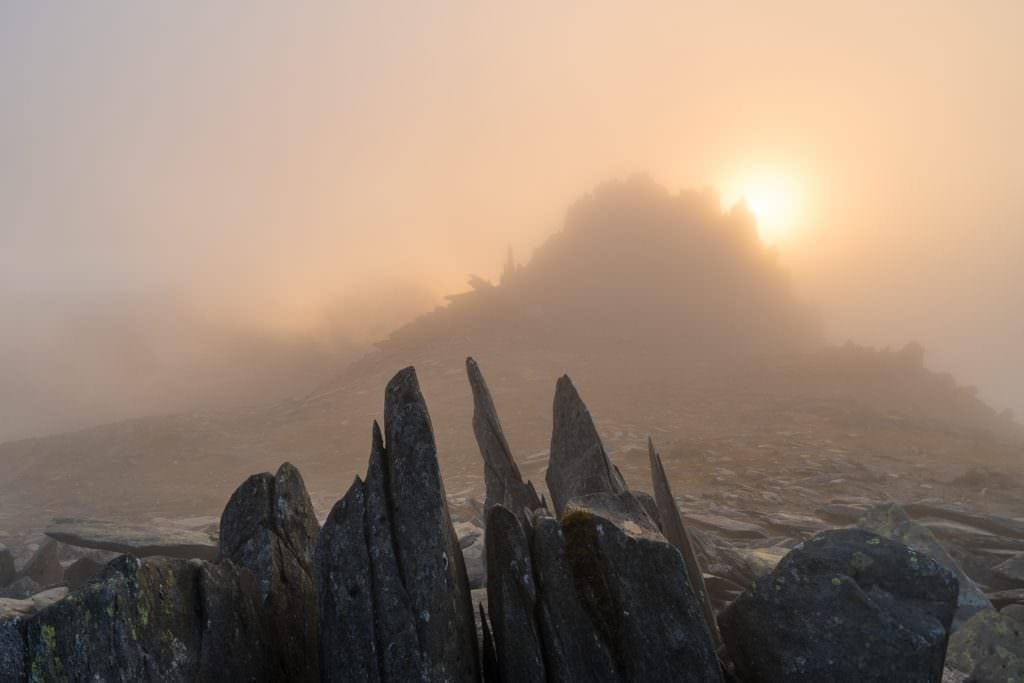 So that’s it. Not really a year in review but more of a record of my most memorable moments of 2016 photographically. I honestly feel blessed to have captured these shots, because to repeat them would be quite difficult and it gives them that little bit of uniqueness.

What did I learn? Well I learnt to go up regardless, you never quite know what might happen. Ok, take rest days and try and pick your days the best you can but if you’re there, make the most of it. I’m going to try and keep telling myself this.

What does 2017 hold? I’m not quite sure. I’ve seen a shift in photographic styles among many to appreciate the intimate details, the abstract details and also simplicity. Trees are in. Slate quarries are in. I can appreciate a lot of this photography and sometimes an image does crop up that I really like, but I’m not sure changing my photographic style is on the cards. I think you should shoot what you enjoy, not what is the trend. I still love mountains and grand landscapes. I think they may be growing old with the community as so many people do them, this means they can all look a bit samey. However that’s why I enjoy heading higher up to try and capture grander than grand landscapes if you get me? Besides, when I try anything different I’m just not happy with the results.

I think, just do what you love and you’ll enjoy it. Photography is a job for me, but I love it and I want to try and continue doing it how I want as much as possible. It’s idealistic, but it’s when I feel happy. Just stood at the top of a mountain, with my camera, not thinking about the other things in life. I don’t ever want to lose that.