It’s been a short while since I’ve done a blog about my recent wanderings in the Peak District. I’ve been super busy with a lot of things and most outings have only produced one or two images, so I’ve decided to consolidate them all into one blog.

First, we have Roystone Rocks. It’s perhaps one of my favourite places in the Peak District. It’s a strange kind of favourite though, it’s not one of those places that springs to mind instantly but I just love how unique the area is with its dark limestone fissures and jagged rocks with a variety of weird and wacky trees growing out of them. It’s a very quiet location and a location in the Peak that is rarely photographed, which is hard to come by these days. It’s also a location which photographically needs some stunning light to do it justice. A few weeks back I managed to get some great stormy conditions and nice red light. The first image is a more classic image depicting the area, showing the limestone rocks poking out looking towards a grand landscape:

My second image was one that caught my eye while up there. This wonderfully shaped tree had managed to grow in a fissure between two upright rocks. Combined with the red light, I thought it made a fantastic scene worth capturing: 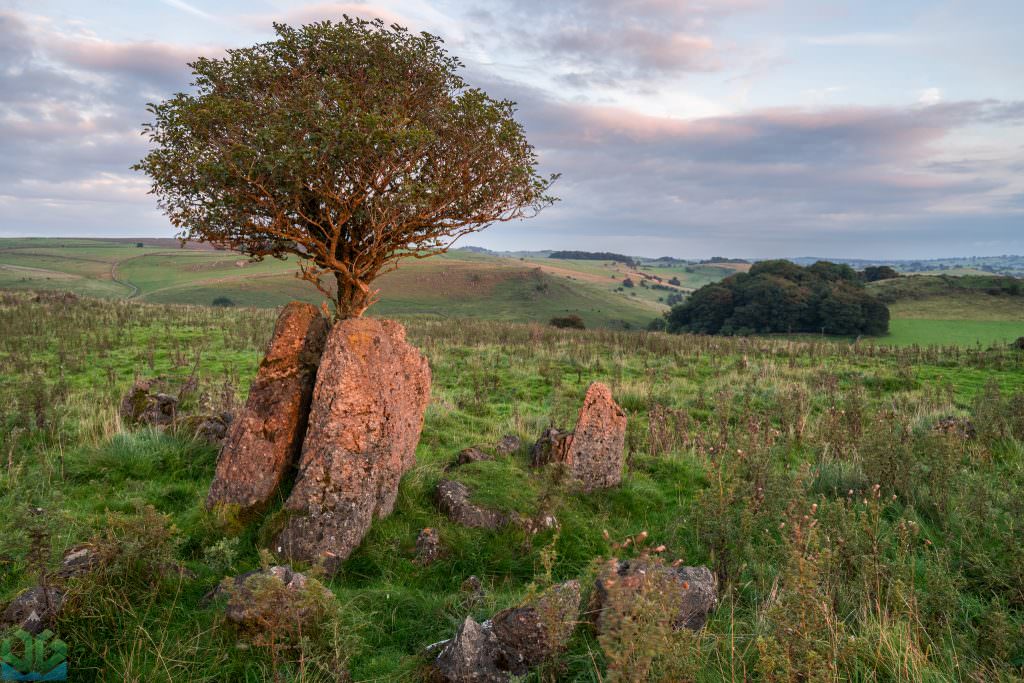 Next is one from Kinder Scout, more specifically from Sandy Heys on the Western Edge’s. I went up Kinder Scout for the Autumn Equinox as this is when the sun gets in a better position for this side of Kinder Scout at both sunrise and sunset. I have taken photos at Sandy Heys in the snow before, but never with greenery. I knew the kind of spot I wanted to be at. There is a series of humps and hollows which look like remnants of a landslip and makes for a grand landscape, but quite hard to capture. I arrived very early and spent some time scouting around and ended up settling on this slab of rock looking over the humps and hollows into the sunset. Also, if you are interested in visiting Kinder Scout and following in the footsteps of the Kinder Mass Trespass then I am doing a photographic walk up here on the 11th November. See here:

The following morning, despite being quite tired I decided to head out for sunrise as you can never predict how long these spells of good weather are going to last. It was a clear night and there was a small chance of a mist or fog in the valleys, so I had a couple of shots in mind that I had wanted to capture for a few years. I set off out and it was quickly evident there wasn’t going to be any mist so I drove to Ladybower to head up Crook Hill. I have to admit, feeling tired, I almost went home with uninspiring conditions and a clear sky. I thought better of it though and set off and decided the exercise would do me good as well as giving me the chance to see how the sun hit the rocks. In the end, I actually did end up taking a few shots and some I was quite happy with. I will have to return though with more atmospheric conditions: 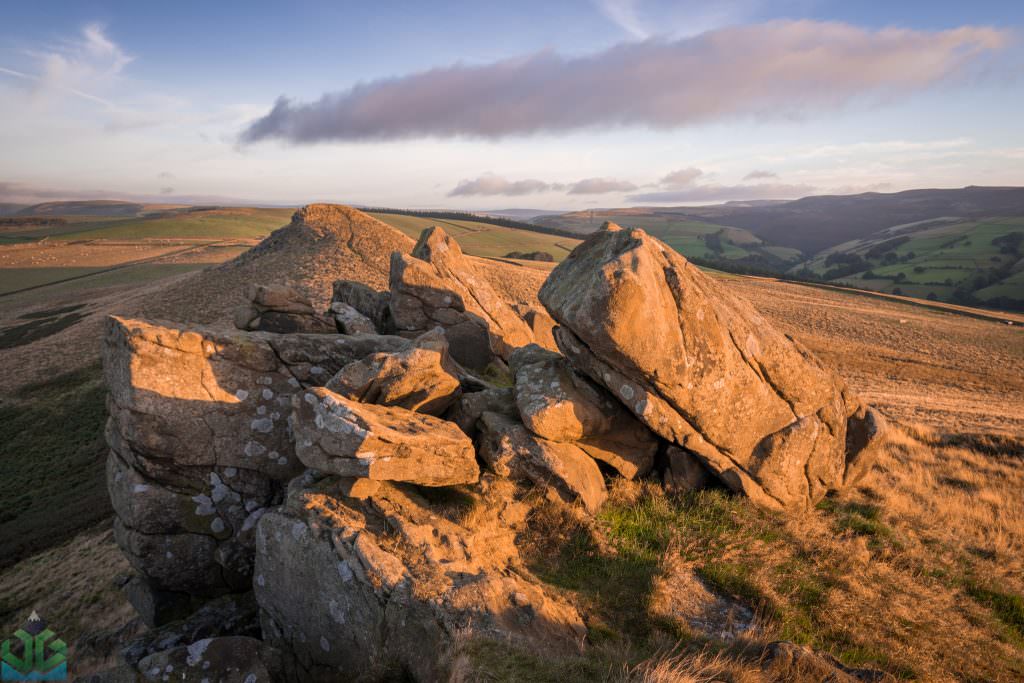 Next we’re off to Alport Castles. It’s another one of them perfect places in the Peak District. With one of the largest landslips in the UK you would think it would be a more popular area but perhaps a longer walk up than most locations put people off. Walking just a couple of miles from the road, in between Sheffield and Manchester, you are rewarded with a location of solitude and seeming wilderness. It was a blustery day and it threatened to clear up, but fortunately a sole cloud would persist over the Bleaklow area. I stood at one of the top viewpoints for a while but decided to quickly rush down into the landslip area and got on this ridgeline to capture this shot of the sunset light striking the landslip cliff faces:

New locations in the Peak District are quite a rare thing for me but Ecton Hill was one of them. The previous week I had visited Wetton Hill, which is the hill next to it and offered good views over towards Thor’s Cave but the rain came and the clouds didn’t clear, so I didn’t take any photos. After talking to a friend, he also suggested that I check out Ecton Hill. He suggested I take the back way in, but after a busy day working I decided to head from Wetton Mill as I knew which way to go roughly. I shot up the steep flanks of the hill, which eventually lead me on to a limestone ridge with great views over to Thor’s Cave. Taking this shortcut actually worked out in my favour as I managed to capture some early evening light before the sun vanished into a bank of cloud. I was particularly struck by the red berried Rowan trees contrasting against a wash of green scenery:

Next, we’re back up Kinder Scout. This time was with Viewranger GPS to film a short about me as a unique user of their software. I’m not sure I’m looking forward to the finished result with my northern dull set tones. I much prefer being out of the limelight and behind the camera! Anyway, after thinking of various locations I could take them, I decided Kinder Scout was a place that summed me up with my style of photography while also being able to demonstrate the use of Viewranger in the Peak, even if I wouldn’t usually use it as I knew my way anyway.

We went up the Wool Packs via Crowden Clough and it was evident it was a very windy day. We had already postponed quite a few times due to poor weather forecasts, so on this day we decided to just go for it. We tried to get some footage in the clough but it was just way too windy. We stopped at the top of the clough and took a few shots and headed to the Wool Packs. Despite all the large rock formations we couldn’t really find anywhere in shelter. I suggested we move on to Pym Chair, just a short distance away as I knew this offered a good chance of shelter with the direction of the wind and I didn’t mind shooting here as my last shoot was a little rushed.

After scrambling around, Jack from Viewranger found a little cave which was free of any wind and suggested we did the interview there. As it also turned out, it was a great spot for a photo looking across the plateau towards Swines Back.

After this shot. I battled with the wind on the plateau to get a shot of Pym Chair itself. It’s perhaps not the best formation in this little area but I hadn’t take a shot of it before and see very few shots of it in general, so thought it was worth a go:

Despite being a full-time photographer, it is sometimes hard to drag yourself away from your daily tasks at a computer when the light is looking good. You feel that if you’re on a roll, if you stop you won’t finish what you started. Either that or you feel you’re not working hard enough to help bring in a livable wage and so going out should only be done if time can be spared. Sometimes though, you have to remember you can work on the rainy days and get out when it’s looking good. It’s hard to find the right balance but after debating with myself what to do I decided to set off locally on a very promising day and was up at Robin Hood’s Stride within 15 minutes. I was hoping for rainbows, drama and amazing light. There was some nice light but it didn’t really fall where I had hoped, so instead I grabbed this shot of Nine Stones Close from afar as the light was breaking over the landscape:

Finally, we finish with my ultimate favourite location in the Peak District, Chrome and Parkhouse Hill (ok arguably two locations but they’re like brothers to each other). A friend had asked if I wanted to go out for sunrise and as they don’t often get chance to get out in the Peak District I gave him an option of locations and he chose Chrome Hill, which I wasn’t going to grumble at. The forecast was really poor but we decided to chance it anyway. On arriving it looked as promised but we headed up anyway. However, what became more apparent was the low cloud would turn into more of a fog and it kept breaking. Behind one of the breaks there was a nice but subtle display of skyfire which gave way to quite an atmospheric image. I didn’t set out to make this image and it’s far from what I would call ideal conditions but I actually quite liked it in the end. There was a certain subtlety to it with atmospheric conditions that added an air of mystery:

3 thoughts on “Recent Outings in the Peak District”