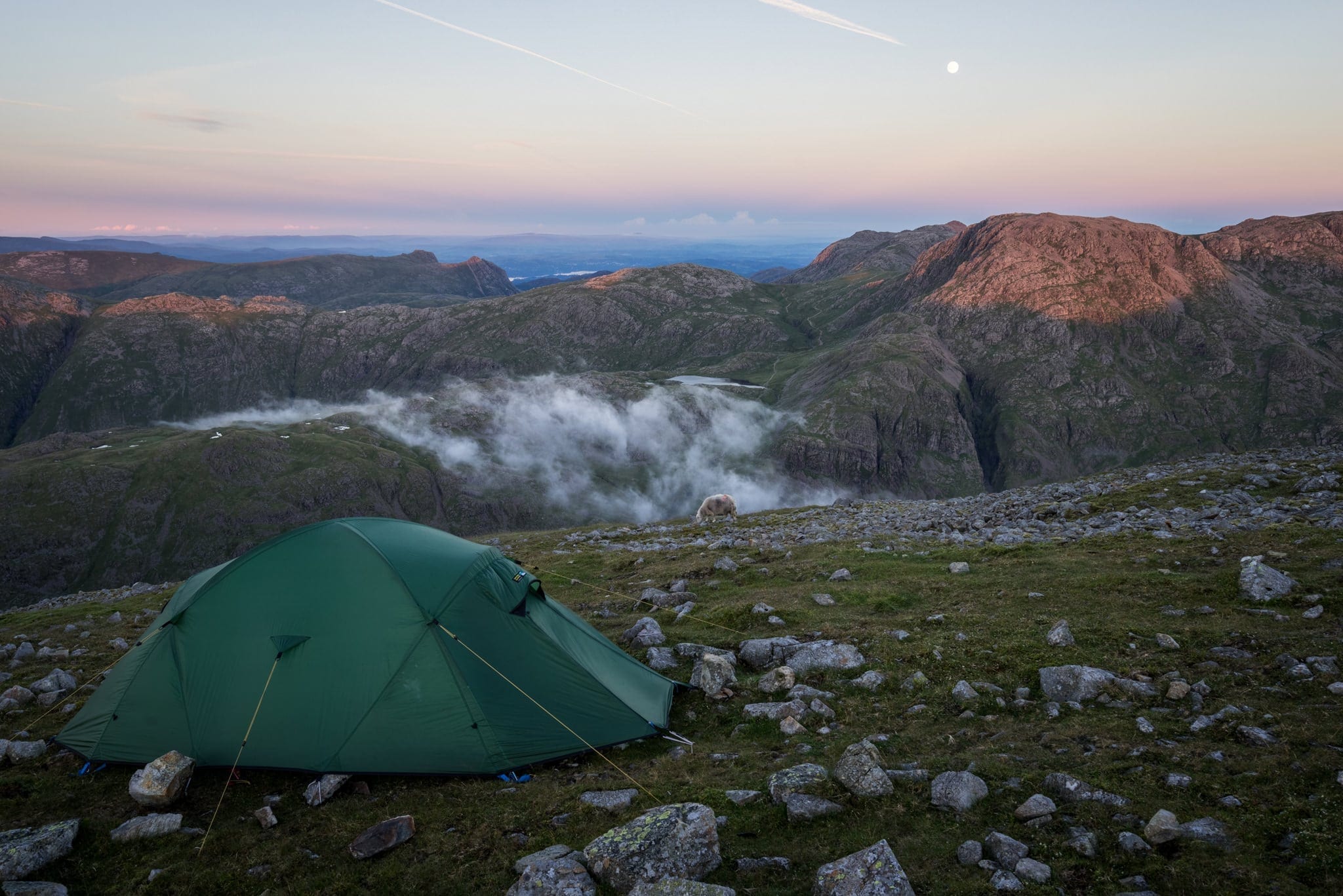 Last week saw the hottest temperatures of the year and while I don’t like the heat when walking, I decided to make the most of it and head off for a wild camp in the Lake District and wild camp up on Great Gable.

Studying the forecasts I was completely unsure what would pan out and where to go. I fancied Snowdonia, but cloudy on Monday and hazy sunshine on the Tuesday didn’t really inspire. The Lake District looked a little more promising, with thick hill fog down to 200m on the Monday and clear skies on the Tuesday but no mention of the haze. Truth be told, I read a few forecasts for the Lake District and decided to take the most optimistic. There were a lot of mentions of thick hill fog down to lower levels and this could scupper any chance of a sunset, but I tried to read between the lines seeing that some valleys would be sunny in the evening and summits partly sunny as well as cloud clearing to the Irish coast. Combined with the high pressure, I decided that getting high enough could possibly yeild a chance to get above the clouds and hopefully catch an inversion.

I did some research, first checking TPE to see the position of the sun. In truth, it wasn’t in it’s best position but I could see at sunset we would get side light looking down Wast Water at least but knew Pillar and other hills would block the last of the sun. I checked the maps and the only other place that interested me was Helvellyn as the sun would rise in line with Swirral Edge, but I knew it would likely be clear skies and not much fun. Itching to go somewhere, I decided to take a risk on Great Gable.

Next, having not been up before (one always on my list) I did a Google search for ‘Great Gable Wild Camp’ and saw only a couple of posts with precarious pitches. Being a caution to the wind guy, I decided to go anyway and asked my friend, Harsharn Gill if he would like to go. Fortunately he had been before and after a little persuading about the weather, he agreed.

I met Harsh in Manchester and made the drive over to Wasdale, the heat already starting to sear. I decided to go via Hardknott Pass to take in the weather and views, but also to try and get an idea on the cloud level. At this point it was already at around 400m and it was thick with not much sun, but we could see little promises of it breaking up. We arrived at Wasdale Head and decided to have a quick lunch in the pub in no rush to get up.

Setting off, it was 26c and sunny in the valley and made walking very difficult. I was carrying around 25kg and no matter how much water I drank I felt incredibly sick and was hoping it wasn’t a sign of heat stroke. We took the path to the col between Kirk Fell and Great Gable and it was up, up and up. I was looking at the cloud and while thankful it was breaking a little, I was ready to get into it for some relief from the heat.

At the col, we saw some sensible campers who had pitched near the tarn before Great Gable but onwards and upwards we must go, up the hard going scree and rocky path. Harsh had suggested we didn’t take this route down, which I was glad for as I could see it would be slow going if we did. We arrived at the summit around 19:15 and we were still thick in the cloud. We had seen a couple of brief breaks and amazing views on the way up but I was starting to become unsure if it would clear, it was forecast to be much better than this by now.

We had a scout around for some pitches for our tents and realised just how baron the summit is, it’s a boulder field with little patches of grass there only to tease you. Eventually we found a sloped pitched possibly big enough for my Terra Nova Ultra Quasar but nothing really for Harsh’s tent. We decided to pitch mine before sunset, just so we knew if we couldn’t we would need to retreat quickly after sunset to find pitches lower down, maybe back at the tarn. Fortunately, I got pitched and while Harsh looked at it saying I wouldn’t sleep, I was happy enough to take the risk to be within metres of the summit for sunrise the next morning.

We headed off into the mist, looking for Westmorland Cairn as Harsh said that was the best interest for sunset looking down Wasdale. The mist was that thick though, it posed some navigation problems. While looking, the clouds started to break and shift and Pillar came into view as well as the Ennerdale Valley. It was all of a sudden starting to look good. We finally found our way to the right side of the mountain and the cairn only happened to be metres away from a pitch Harsh had spotted for himself earlier on! That’s how thick the mist was before.

I grabbed the following shot and it really does show us above the cloud as it was clearing. This was looking over to Sca Fell which you can just see poking out in the distance.