A month ago (wow already) I visited Switzerland. I had wanted to see the Matterhorn for years, with it’s unique profile recognisable to many.

I finally had the opportunity to go, so me and my girlfriend decided to book it and take the long drive over there to visit Zermatt and the Matterhorn stopping in the nearby village of Randa. It was set to be a week of experiences.

We set off on perhaps one of the most tiring drives ever, we didn’t get any sleep beforehand and learnt our first lesson. After 22 hours of travelling though, we arrived in the dark, at our hotel in awe of our surroundings. The day had been mainly cloudy and it was much the same at night but the next morning we woke up to blue skies. This was set to be like this for the rest of the week, with temperatures on some days reaching 18c with 1m of snow at least in the lower regions. It was very odd!

We got up the next day and was excited to go see the Matterhorn, rather than waiting we jumped on the first train from Tasch to Zermatt as Zermatt is a car free village. We held ourselves in anticipation and as soon as we caught our first glimpse of the Matterhorn we were in awe. It stood there, dominating the skyline with its unique profile like nothing I had ever seen before. I don’t usually get giddy, but this had fulfilled a dream I had for so long. It was well deserved.

We had a potter about, taking in all the extortionate prices of Switzerland and decided to try and capture the sunset. We wasn’t really high up enough to get a decent picture of the Matterhorn and the sunset was behind it anyway but I concentrated my camera on the Taschorn across the valley as the setting sun created red light on them:

Feeling relaxed, we headed back to the hotel after grabbing some expensive food in anticipation for the next day. We had set out hoping to wild camp at Stellisee Lake or Rifflesee Lake but hadn’t really had enough time to plan as we were still recovering from travelling.  Our hotel owner also advised us it probably wouldn’t be possible to get to the Lakes which was worrying. We were packed up and just headed off to Zermatt and took the Matterhorn trail in the hope of finding a spot to camp in view of the Matterhorn, we walked up as far as the small village of Furri but with so many ski slopes and snow as deep as 2m we knew it wouldn’t be possible. We were gutted but alas we set back off down watching a nice sunset and returned in the dark. The hardest part was the long walk back to Randa from Tasch with heavy packs in the dark and cold.

A little gutted, we swore we would wild camp the next day at one of the lakes now we had a feel for the area and headed back to Zermatt. We really wanted to catch that red light first thing in the morning on the Matterhorn. We got to the Gornergrat station in Zermatt and spoke to the operator about going to Rifflesee, he advised the snow was 2m and the trails were closed, it would be almost impossible to get to Rifflesee. We were devastated, we never envisioned this but it explained why we couldn’t find much info on Switzerland in March from a photography point of view. Instead we decided to go to Gornergrat observatory as the last train down was just after 8pm, giving us chance to do a sunset and some star work. We duly paid the £90 return fee for both of us and set off up.

We admired the views, but once we got to the station for Rifflesee it soon became apparent that the locals knew best. The hiking trail signs were only just poking out above the deep snow. It would have been a nightmare to walk there. A little annoying really as the local guide books in the train station gave around 100 routes that were accessible in winter, this being one of them.

We got to Gornergrat, even though we were over 3000m high the temperature still felt fairly warm which was a weird experience given the amount of snow and coats weren’t even needed at times! I set about to work and captured this great panoramic showing off the Matterhorn and the surrounding mountains (click to see larger):

I went up to the viewing point and from here you have a panoramic view of 29 4000m Peaks including the Matterhorn and the Monte Rosa which includes Switzerlands highest peak, Dufourspitze. It wasn’t near sunset so we took our time taking in the views, grabbed some lunch and looked at our heavy bags wondering why we had even bothered to carry them. Could we have snuck off and wild camped somewhere? Possibly, but it could have been dangerous.

To which point, we started to hear avalanches. We couldn’t tell where they were coming from, in a valley setting the sound echoes and you have no idea but they sounded close. The next thing we knew, not even into golden hour, a local run up saying we must leave and get the next train down as it would be the last. We were frustrated, very frustrated but knew we had to leave. We got on the train without any more pictures and felt like asking for our money back. The train staff were running about, making phone calls and looking panicked. We were told that indeed the avalanches were below us and blocking the track and we could get off for a hour or so while they cleared the tracks.

After being on a high, then kicked down and lifted back up again we were shooting in the golden hour. This first image saw me going above the viewpoint trying to get an image that looked less easy to access, the only thing that let it down was the pole in the midground. I wanted to get a bit further along but there seemed to be a possible cornice with footprints leading to it either side and then they stopped so thought best not risk it! 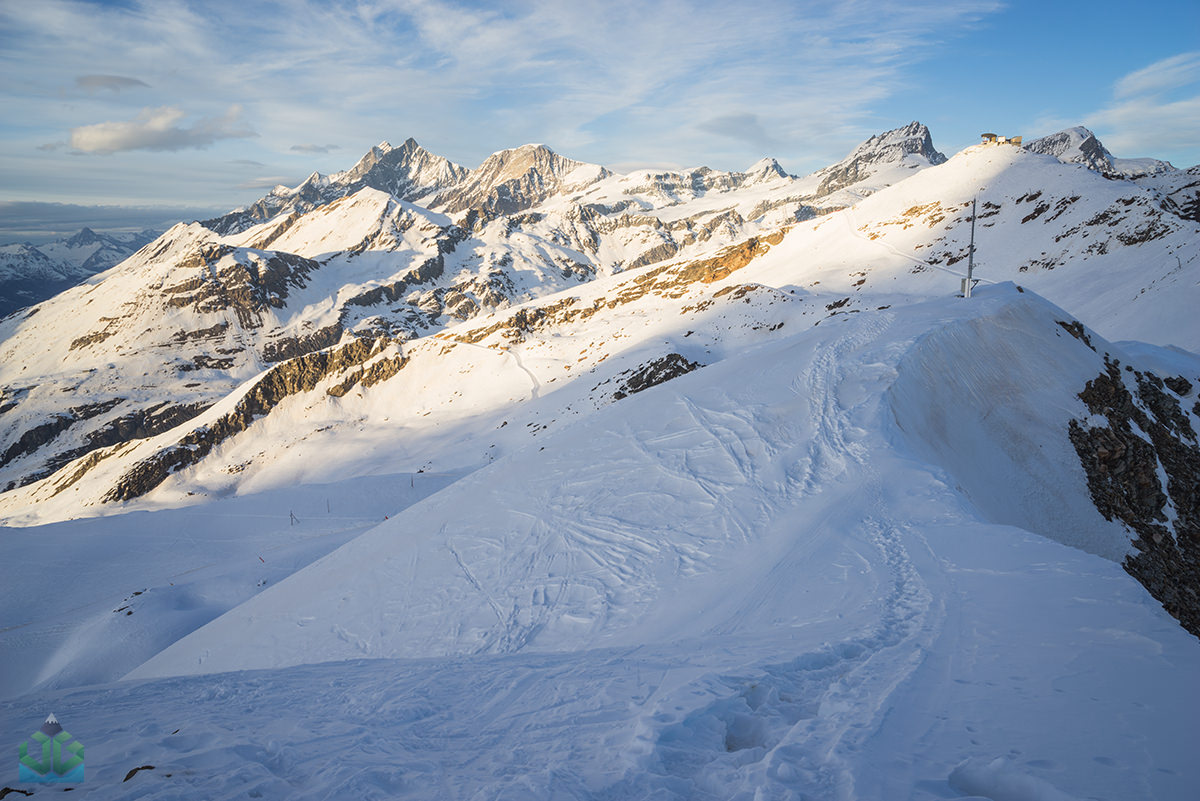 This one is looking to Switzerland’s highest peak on the right: 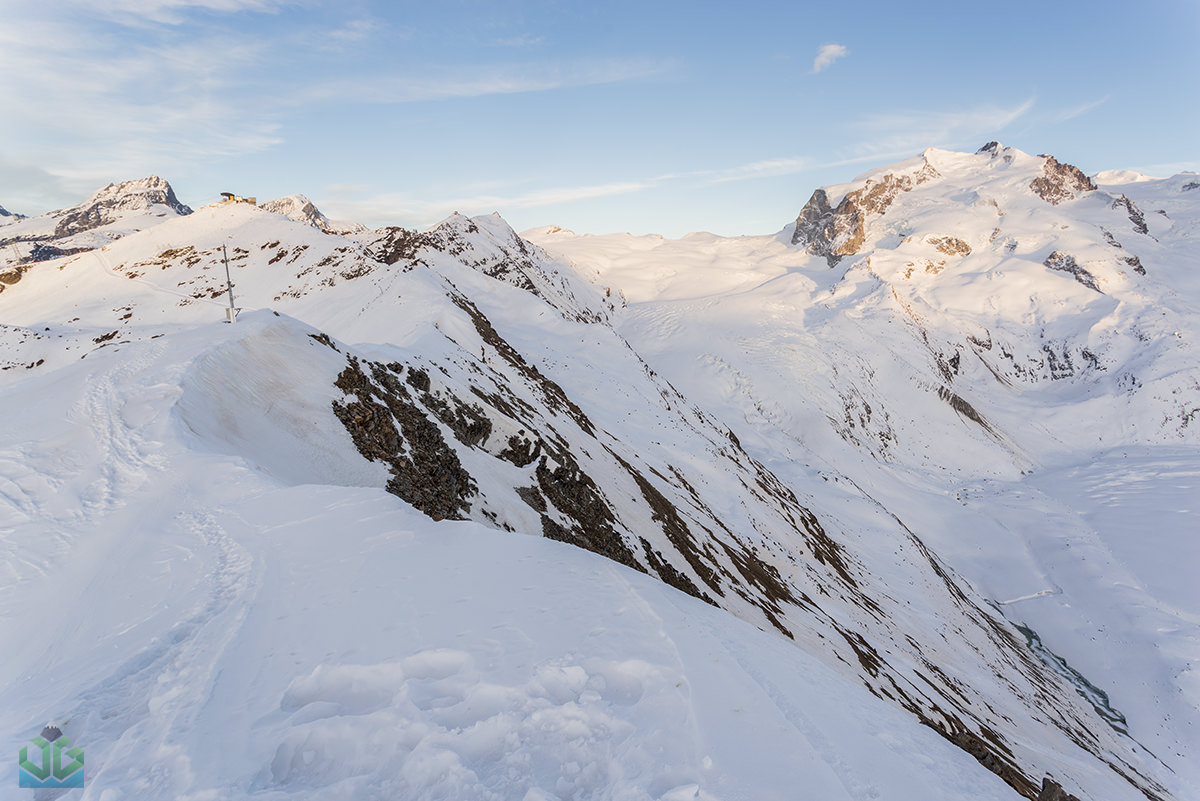 Finally, a picture of the mountain I had set to photograph initially during golden hour, the Matterhorn with a backlit sunset sky: 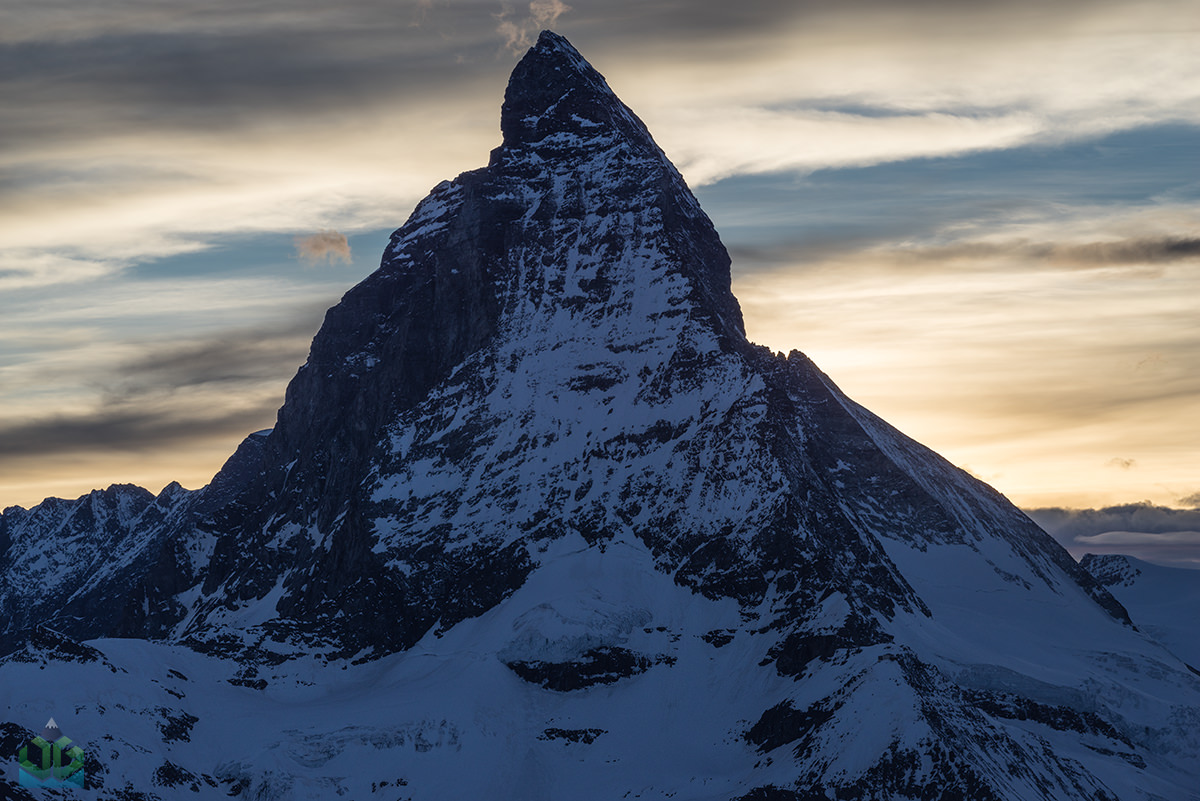 There had been further speculation about how we were getting down, there was even talk of an helicopter lift but before the sun had fully started to set we were hailed back to the train. The sky was started to glow really red and I was ushered onto the train kicking and screaming (in my head at least) . We got down to the next station and we missed the best sky of the week and the best red glow on the mountains and got told to get off again. We were seriously getting confused but everyone started getting loaded onto a big snow plough but alas there wouldn’t be room for me and my girlfriend with our big rucksacks. They said wait here, a taxi will be us soon.  The next thing we knew two snow mobiles rocked up to take us down. I had never been on one before but I got on, wrapped my bag tightly and the guy goes “have you been on one before?”…I duly replied “No” at which point he made sure he accelerated hard! It was excellent fun and made up for all the disappointment of the day. We got to the next station and could see around 7 avalanches that had covered the tracks. We got the train back down to Zermatt and finished off our day.

The next outing would be to see the Eiger in Grindlewald, it’s not even over 4000m but it’s impressive north face is world famous. We asked local knowledge about the roads to Grindlewald and was given the all clear. We set off, following the sat nav but after about a hour of travelling we found the mountain pass was closed due to deep snow. Doh! We turned back and went to the anticlockwise route putting another 2 hours on the journey. The next thing we knew we were on a train ferry that carried cars through the mountains! Different and another new experience! Finally after many hours travelling we arrived in Grindlewald. We did a little exploring and I took this picture from just outside the town: 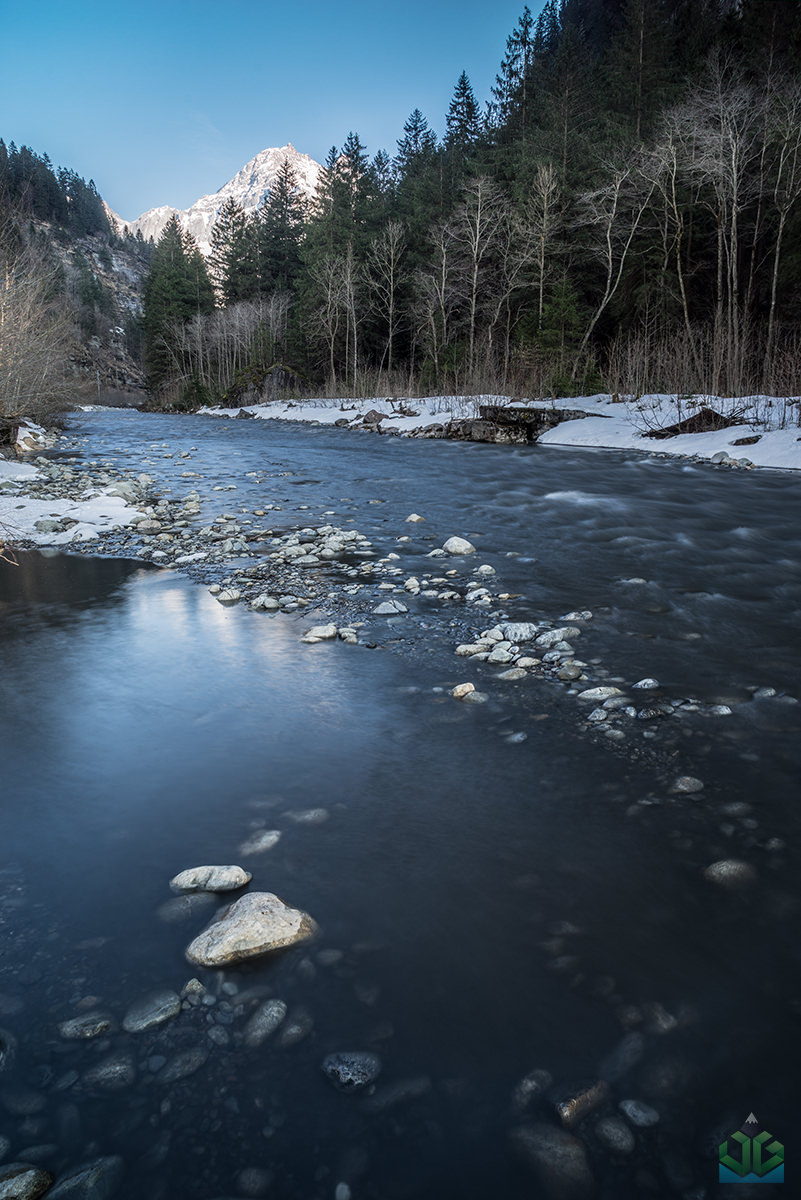 The next shot was from Grindlewald looking towards the Eiger as the sun set casting a fierce red glow on the North Face: 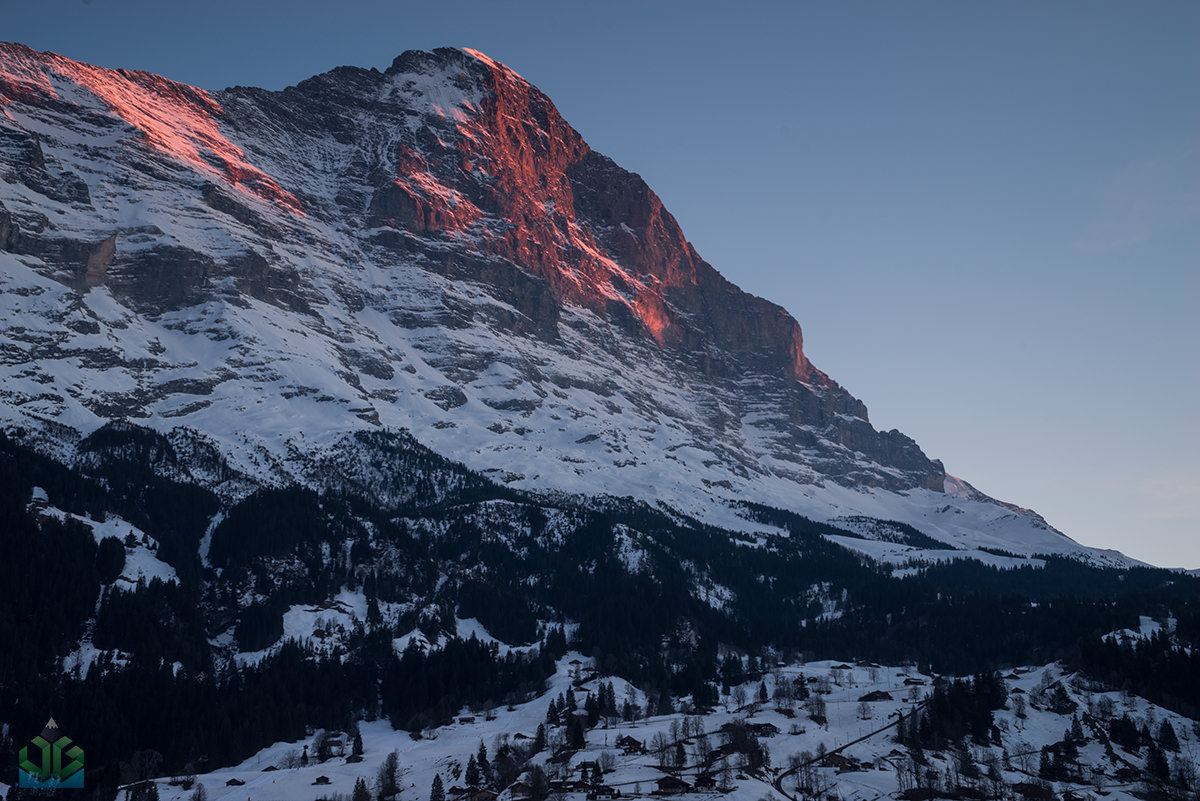 The next day we headed to Domodossola and Milan via train but in the morning I caught the first early morning light of the trip from the hotel as the sun started to rise over the nearby mountains, I believe the highest point in this image is the mountain of Dom 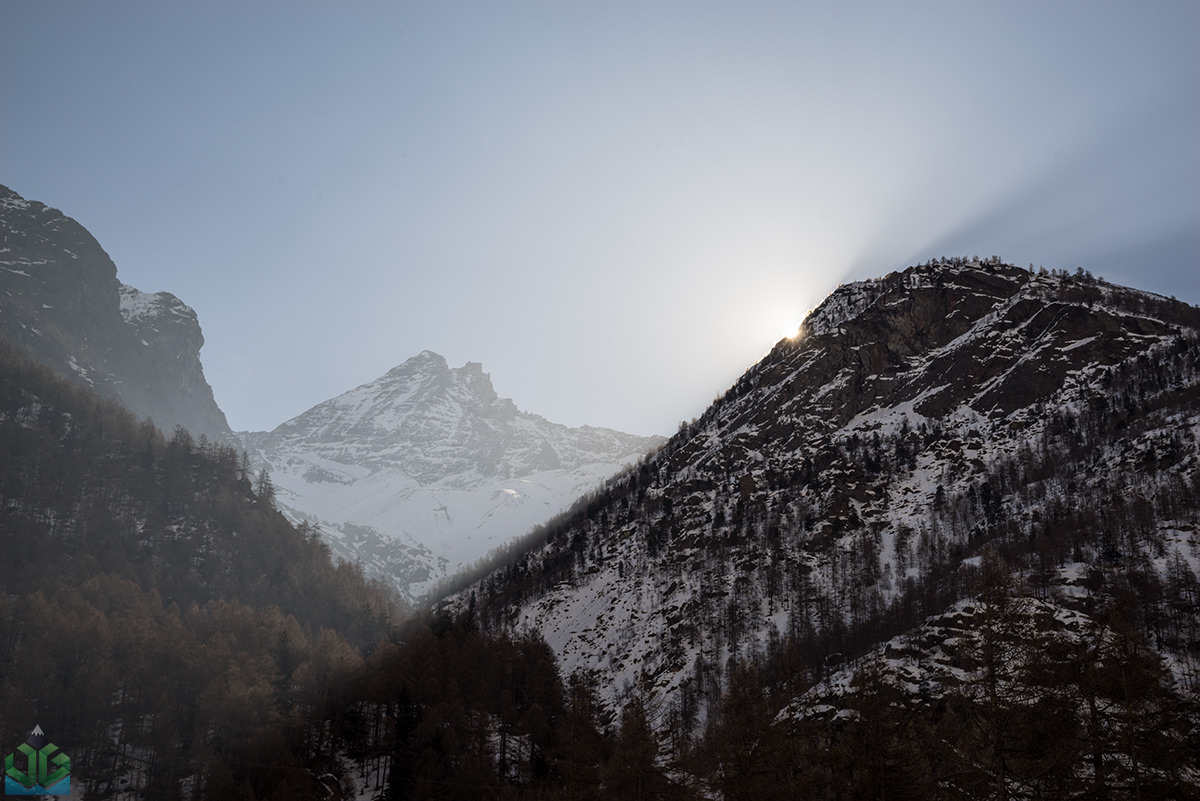 This next image was also from the hotel, taken at night over a period of about two hours: 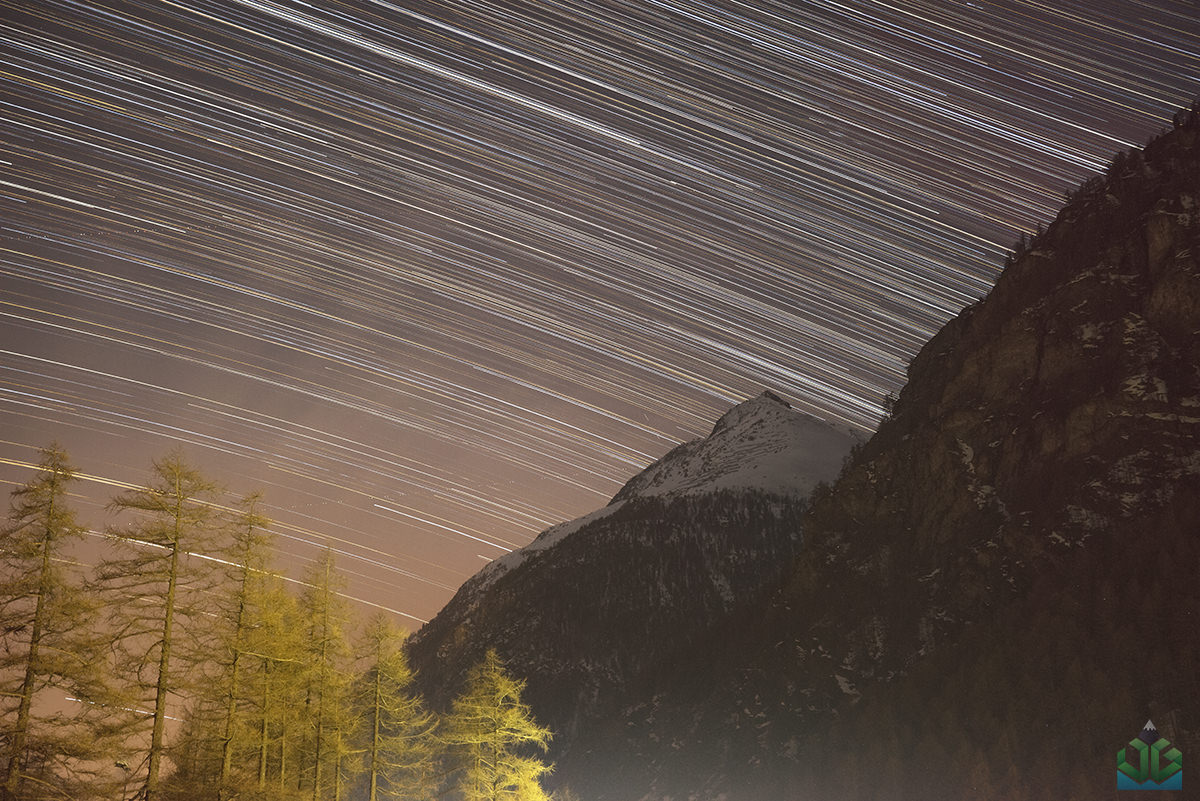 And thats its really…a week full of adventures, new experiences and great weather. I never got to see the Matterhorn at sunrise, the trains didn’t even set off early enough. I think I’ll be back next August with less snow and the milky way high in the sky!  The day we set off back to England it was dull an overcast informing us we had planned our trip perfectly. Apart from one thing, we set off back and it was soon becoming apparent that despite giving ourselves two hours to spare we would be rocking up at the ferry port with minutes to spare and almost 0 miles left in the tank. It was like an episode of Top Gear! We simply couldn’t stop and we arrived at Calais with 15 minutes to spare and 5 miles left in the tank. Unfortunatley customs were very slow and we got held until 5 minutes after depature and we missed the ferry having to wait another three hours. Infuriating  and made sure we didn’t get back home until 5am!

It was all worth it though and I hope you enjoyed the read.