Kinder Downfall is the largest waterfall in the Peak District at 30 metres tall. However, that said in the drier spells it’s confined to a mere trickle and doesn’t look anything impressive. However when the wind is blowing strong in south westerly direction after some fair rain one of the most unique spectacles in the Peak District unfolds and that is that the waterfall “falls” upwards as it gets blown back. As a walker, I have walked past and over the downfall river many times over the last 5 years but had only caught Kinder Downfall blowing backwards for the first time back in July this year and the weather conditions were not ripe for photography. However, just before Christmas I fancied a trip up Kinder Scout again to visit Kinder Downfall to try and capture something new.

I had seen a few photos in the last year of Kinder Downfall that were really good, usually shooting into the sun looking along the stream over to Kinder Reservoir but I hadn’t seen any of Kinder Downfall actually blowing backwards and I knew I had to capture this image though it would be tough. It was a windy day and after checking the direction of the wind was south westerly and that there was decent conditions out I set off to Bowden Bridge, Hayfield where I would start my ascent.

Kinder Downfall has to be perhaps the longest shot you can walk to capture in the Peak District at 3 and a half miles one way. I walked up via Kinder Low End, past the trig point and along the edge up to the downfall itself. I managed to reach Kinder Low End in 40 minutes, the trig point in 55 minutes and on to Kinder Downfall in 1 hour 20 minutes which I thought was respectable. On the way up the clouds were rushing passed, creating some lovely light and I was thinking I was in for a treat.

On arriving at Kinder Downfall though, which is in a V like a huge amphitheater of falling rocks a huge bank of cloud had been blown into the horizon and there was no light and I thought I was out of luck. Even though I had arrived early I was kicking myself for not getting there earlier for the light I had witnessed on the way up. I sat down, set my camera up “just in case” and had some food while watching the downfall being blown upwards back onto the Kinder Plateau. I really should have had more faith, if there’s one thing wind guarantees is fast changing conditions and the cloud started to break showing my first signs of light.

I moved positions and headed to the stream where Kinder Downfall starts and spent some time trying different compositions. What’s that you’re thinking, standing underneath the waterfall that’s being blown back at you?! Yes, you’re right I was but you have to do these things to get a different image and more importantly an image you want.

I spent some time faffing with various compositions but felt most happy standing at the side with the nice side lighting reflecting off the wet rocks. You may think I would have been better standing here but the fact is this is precisely where the water was landing after being blown back up. I for some reason have three reverse grads in my collection at the moment and here I proved why I needed them. I placed a 0.6 ND in the front slot, which was my slave filter that would take the beating of the water and I would remove it at the precise moment the shutter would take the shot. Needless to say, a lot of shots I got had water droplets on them and I ended up getting through all my filters that I could use. I was soaking, but good clothing should mean it’s never too much of an hardship.

So what was all that effort for? Well this: 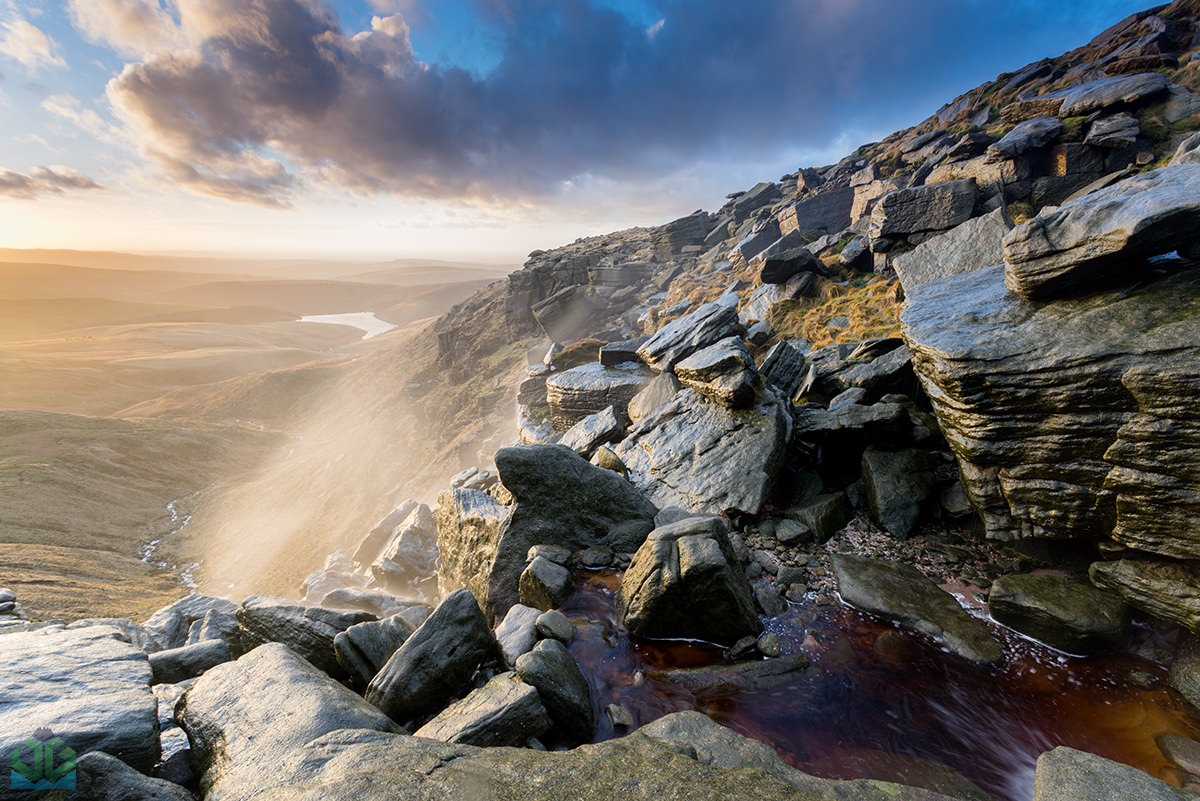 So was the toil worth it? Well I think so, personally I really like the image and felt like all the effort and vision had come together and has to be one of my favourite for a while.

One thing I said above was about having the right clothes, I forgot to mention that as my two decent pairs of trousers were in the wash I only had a pair of Craghoppers cotton trousers to wear. Not the best choice, as these had become sodden and made the walk back a little miserable. That same wind that had helped me earlier was blowing directly into me walking back, creating a cool wind chill factor and perishing my poor legs and battering my face.  I’ve still returned to the car with a smile on my face though and those unpleasant moments have dissipated.

Thanks for reading and I hope you have a great New Year and a enjoyable 2014! Thanks for your support over the last year.