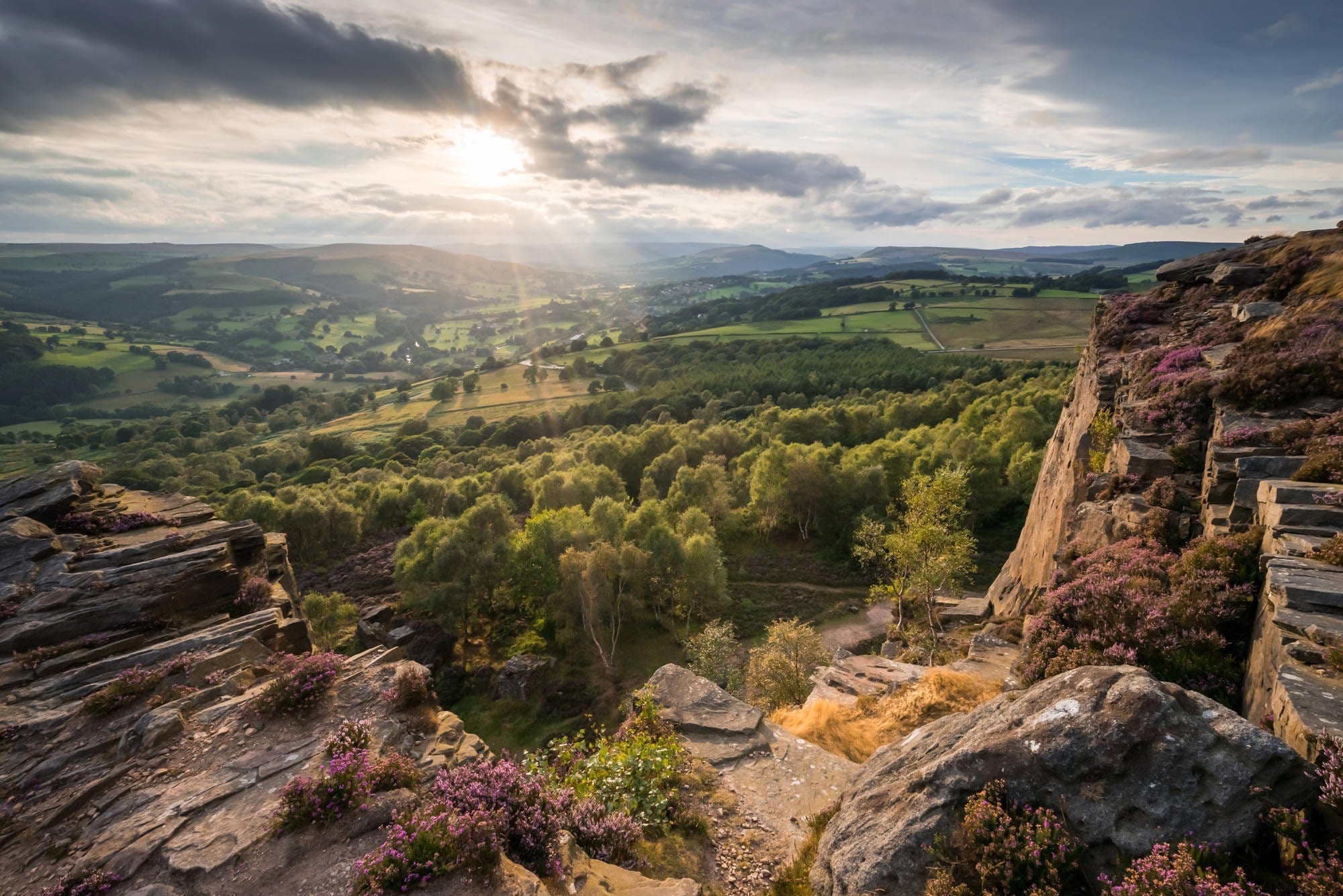 Another recent escapade of mine was to Millstone Edge. It’s very rare I go somewhere in the Peak District that I haven’t shot properly before but Millstone Edge is one of these places.

The last time I went, I had a quick scout around but ultimately ended up shooting just beyond the edge looking up towards Over Owler Tor.

After a day sat behind the PC, updating things and key wording I was ready for some fresh air. It was a very cloudy day though with very little sightings of the sun. The forecast also suggested 100% cloud coverage. However, some days you just need to go out and see how it goes, even if it’s just to clear the head and do a bit of a reccy. I also wanted to see how the heather was getting on.

I arrived almost an hour before the golden hour and upon arriving to Surprise View car park there were small glances of light spreading across the trees with a thick bank of cloud moments away from blocking the sun. At this point I felt a little disheartened to even get out of the car but I did so anyway and thought I’d have a small walk around to see what was what.

I walked up to Millstone Edge via Surprise View and one thing that was apparent was how windy it was. Wind is usually good in doses, it helps move any stubborn clouds and often opens up small snippets for the sun to break through. When this happens it is usually my favourite type of conditions and light. Even in harsher light, having the clouds there acts as a diffuser and it becomes much more golden than if it was a clear sky. Unfortunately, wind does also mean the heather and grass moves a lot and can become an uncontrollable  blur in shots with fairly long exposures. It also makes for a difficult time shooting, with camera shake another issue to think of.

I found where I wanted to be on Millstone Edge but I had a few walks up and down to see if I could find any new compositions. It was quite apparent everyone else had thought to stay inside on this Friday evening, probably enjoying the Olympics or something. Not a soul to be seen. To me, it looked like the cloud wasn’t going to break and I text a friend who lives in Hathersage to see if I could go down to see him. I decided though to give it another ten minutes to see what would happen. Eventually, I could see sun rays trying to come through in the distance near the Hope Cement Works in the Hope Valley. I could also see light spreading behind me on the Longshaw Estate and Burbage Rocks. Would it ever come to me though?

I decided that my mate could wait a little and I would wait it out. Finally, the cloud shifted and gave me a little dose of light. This isn’t the first image I made but probably my favourite from the evening. It’s a rare thing that I offer up a shot from somewhere in the Peak District I haven’t been before. Looking around as well, I can’t see anyone else who has done this composition, so I’m really pleased with it overall (although it’s likely to have been done before, like with most photography). I was taken back by the V-shape in the cliff edge looking into the sun with the contrast of the purple heather against the backlit birch trees below: