So time to catch up. It’s been a little while since I’ve blogged and nothing since my Skye photos (and I’ve yet got to do my night time shots blog). I seem to be getting busier as the days go on, with less time for stuff like blogging etc.

However, I always manage to find time to get out with the camera. Since Skye though I’ve been admittedly a little less enthusiastic about the Peak District. Don’t get me wrong, it’s a fantastic place but since having such fantastic conditions on Skye in such amazing scenery it really is hard to compete with.

So I’ve found myself going to the Peak Districts higher places recently, which I like doing anyway but just made more of a conscious effort to do so. With the later nights as well, getting up to these places in time becomes easier (although it means a very late return home!) and as such recently I’ve been up both the Peak Districts only mountains (though it’s only a technicality over form).

A few weeks ago, I met up with Andrew Yu after I had been in Manchester for the day and headed to Saddleworth to have a bit of an explore. Saddleworth is a place I greatly adore, somewhere I never walked and only first visited in December last year. I’m making more of an effort to get back because the scenery is some of the most dramatic in the Peak District, that reminds me more of the Lakes than the Peaks.

Andrew had been wanting to go up Dean Rocks for some time, so I said I was more than happy to go along. It hasn’t really been photographed before with no guides on how to get there and no marked paths. We started at Bin Green Car Park, headed across the dam between Yeoman Hey and Dovestones Reservoir and started up the side of Ashway Rocks eventually carrying straight on up the clough and finally turning right up on to Dean Rocks. After about a hour of tough walking we arrived at the top of the cliffs and had a good explore. The light didn’t really transpire as I had hoped, but I quite liked the composition and especially the gritstone formation hanging over the cliff to the drops below: 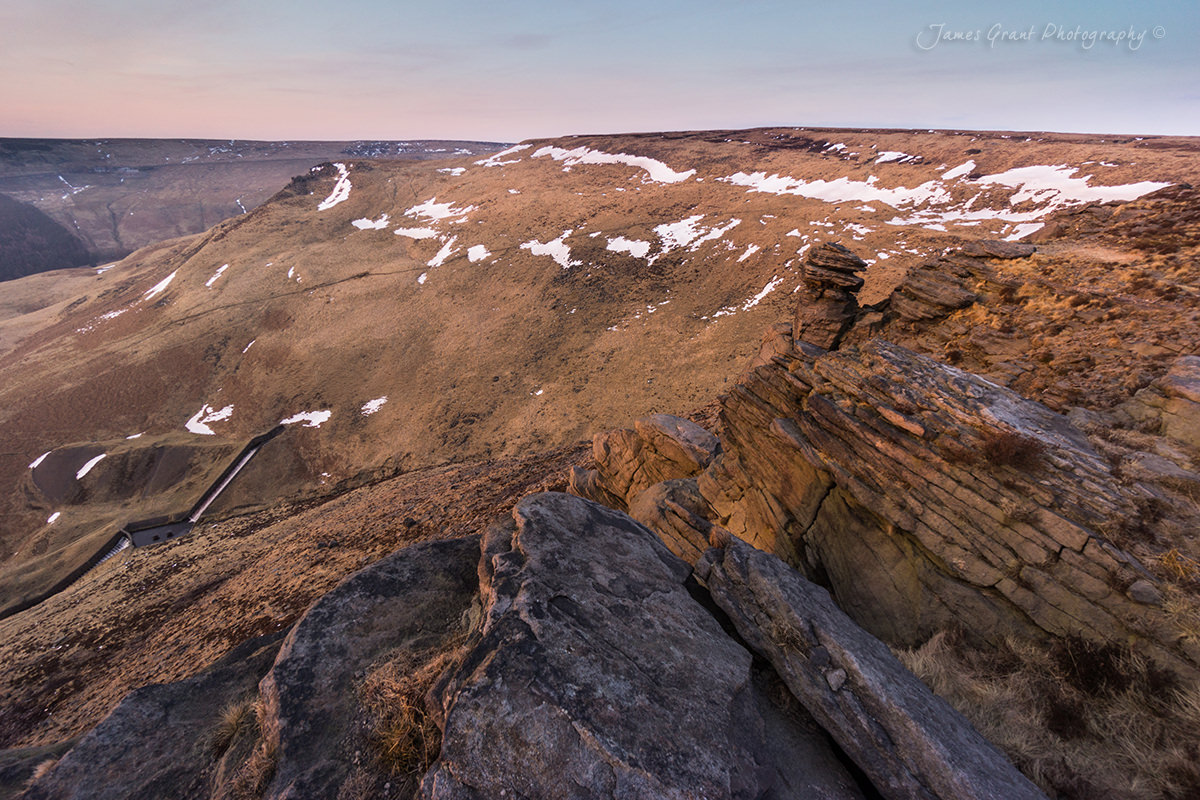 A couple of weeks later I headed over to Fairbrook Naze which is on the Northern Edges of Kinder Scout, just over 600m it qualifies for all intents and purposes as a mountain for the rights of way act but Kinder Scout is more of a mass plateau than a mountain. That said, don’t dismiss Kinder Scout, its a fantastic place with amazing views from any of it’s edges. Just do the Kinder Round walk which circumnavigates the whole of Kinder Scout and you’ll see why.

I have spent a few days in the actual brook of Fairbrook Naze photographing the falls in the height of heather season, but I had wanted to get to the top this time to photograph the view down. There is this nice outcrop at the top which makes a great photographic subject. The sunset wasn’t all I had hoped for with a bank of cloud blocking the suns final 30 minutes of descent but I was more than happy with the result I had managed to get. The shot was looking at the outcrop, down the brook and into the Woodlands Valley: 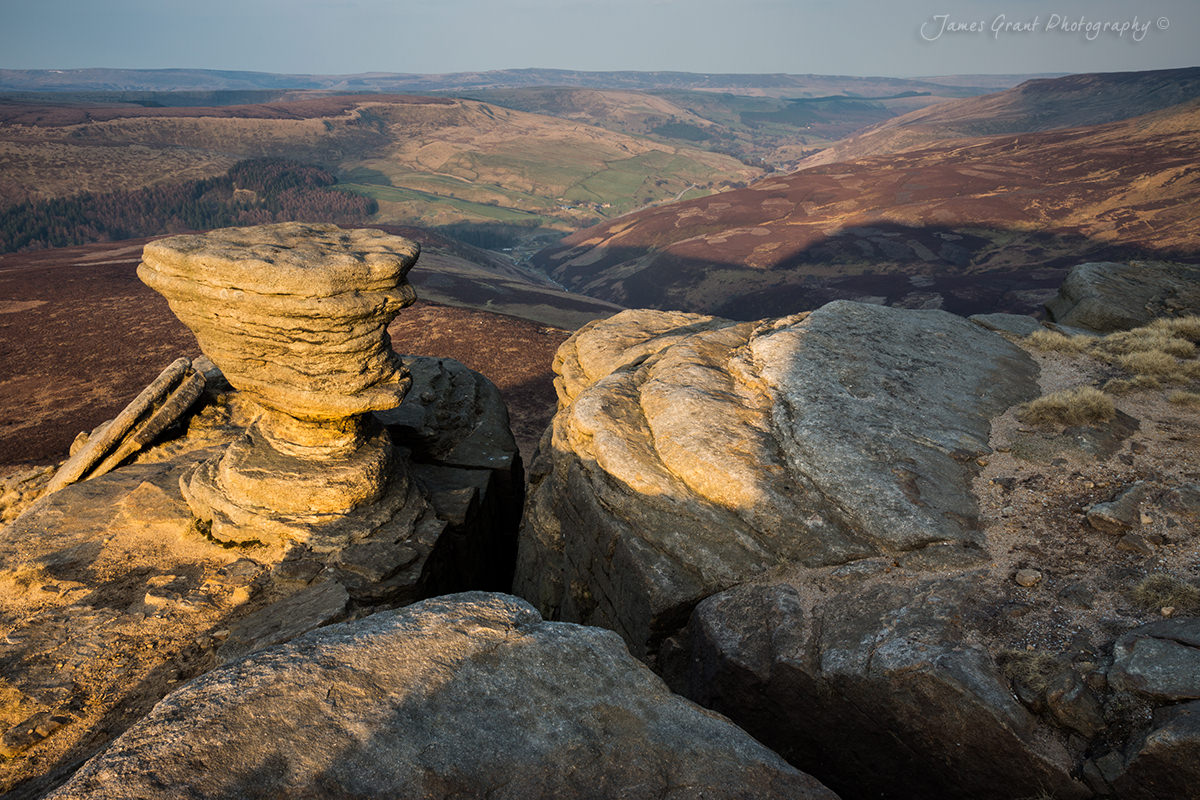 The following week would see me heading to a place I should have visited a long time ago but just hadn’t got around to and that is the aircraft wreck up on Bleaklow near Higher Shelf Stones. Bleaklow again is a mountain for all intents and purposes but is even more desolate than Kinder Scout. It is mainly a lot of groughs and bog with very little in terms of paths…only really having the Pennine Way crossing it. This makes navigation up there very tricky indeed.

I had been on Bleaklow previously and managed to miss the “turning” for Higher Shelf Stones and never got to the wreckage instead ending up at Bleaklow Head so this time I made a point of getting there. I still missed wherever the turning was and instead near Hern Stones I took a bearing and made a bline for the wreckage. It was tough going and quickly found out to take more time over the bogs, because you really don’t want to fall in one and get stuck when you’re on your own!

On arrival at the crash site I was taken back by the size and scale of it all, pictures really do not represent this. The next sense I felt was a sense of eeriness, thinking about what had happened here and how many had lost their lives coupled with all the memorial crosses. I was fortunate to go up on a sunny day but people have described the strange feeling on a typically misty day up there. You also realise how unlucky the people were to have not been flying about 40 metres higher where they would have cleared the hill, just.

A little bit about the crash first:

On 3 November 1948, USAF Boeing RB-29A Superfortress 44-61999, of the 16th Photographic Reconnaissance Squadron, 91st Reconnaissance Group, 311th Air Division, Strategic Air Command; crashed at Higher Shelf Stones, Bleaklow, whilst en route from Scamptonto Burtonwood. All 13 crewmembers were killed. A large amount of wreckage is still visible, as a memorial to the crash. Also, a proper memorial was erected at the site in 1988. There is public access to the area. To reach the wreckage, follow the Pennine Way from Snake Summit as far as its crossing with Doctors Gate. A short distance after this point leave the main path and head due west for 100 m until another path is reached that follows the valley edge. Follow this all the way to the Summit of Higher Shelf Stones. From here follow the numerous paths leading through the heather towards Higher Shelf Summit. The wreckage lies a short distance along these paths.

I concentrated my pictures on the engines making the most of the late evening light that I could and came up with this result: 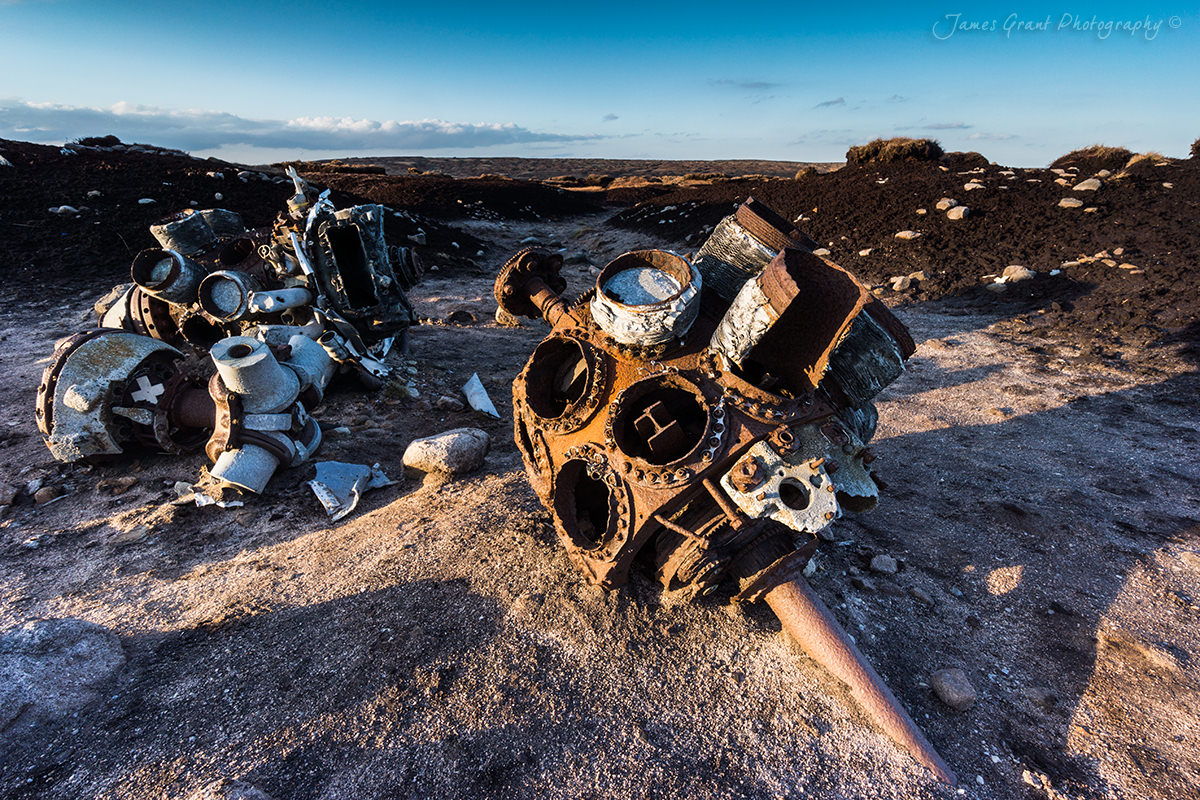 Next off I went to Lower Shelf Stones to try and catch the sunset, initially I was turned 90 degrees south (to the left) to take my picture to capture glorious golden side lighting. However, despite my effort and careful composition when the sun did break below the cloud due to a thin haze on the horizon the light never really got through, instead I was forced to quickly turn into the sun and compose a shot while a very soft, subtle and strange red light was instead cast on the gritstone rocks: 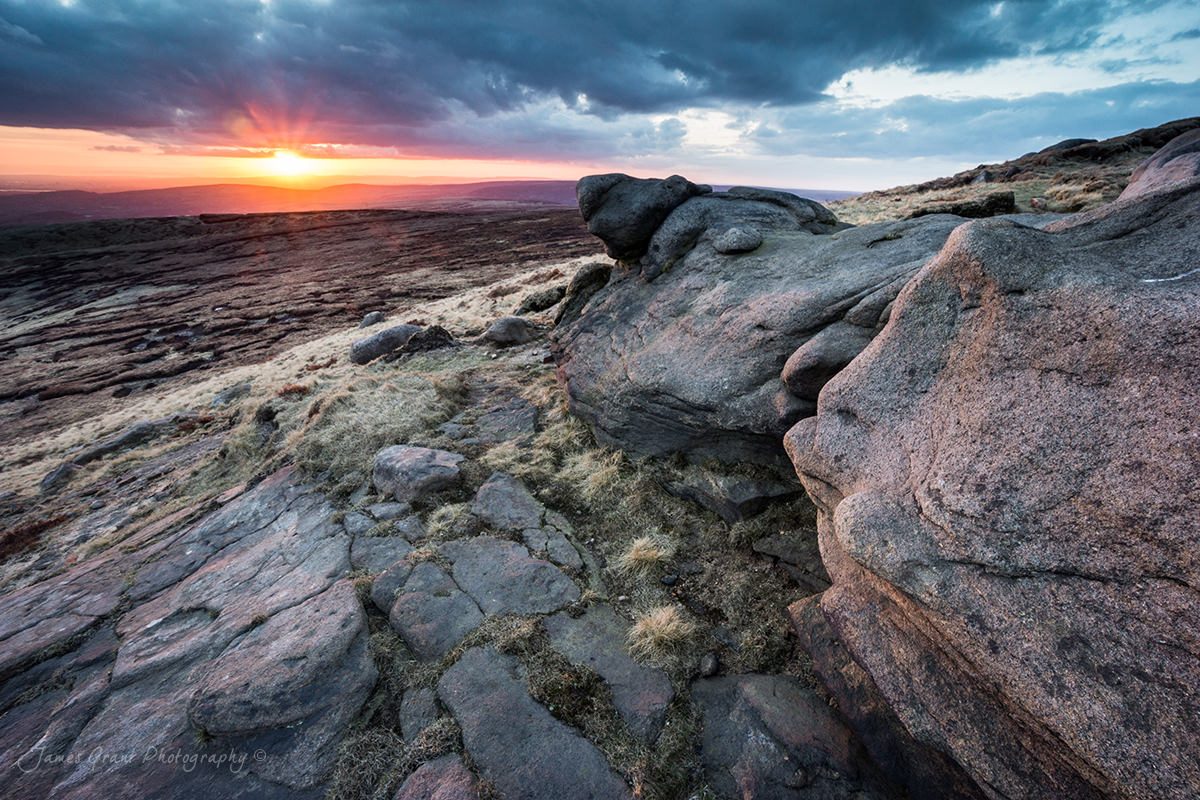 So really that’s been my last couple of weeks. We’re starting to come into season where the White Peak is at it’s best so I can see myself focusing some of my attention around there….providing we get the weather.