Sometimes landscape photography can be frustrating, you can spend weeks without making a single image your happy with and then some days you get heaps of light where it’s almost impossible to make a bad image. While recently I’ve not had a huge dry spell, in the last couple of months it’s been a little quiet in terms of making images. I had a nice evening up Saddleworth the previous week but the Saturday just gone was just one of them days where it was perfect from start to finish.

I had tuition organised with two people and the forecast had been great all week, now while I prefer changeable weather for myself, it always makes things a little easier for me when teaching if we can get some good continuous light. However, late Friday night the forecast on Metcheck and MWIS both changed to a bad stormy day with a lot of rain – not good I thought.

Despite that, due to the previous couple of day’s snow in the Peak District I had geared myself up for a cheeky sunrise before tuition. I woke up Saturday morning, looked out of the window to a sky full of cloud and I didn’t feel like going out. It took me a full 30 minutes to decide to go (after all it would pass a couple of hours before heading to tuition) and after checking the Metoffice app the forecast around Buxton seemed a little more favorable compared to the view outside of the window.

So, bleary eyed, I set off with a view of either Ramshaw Rocks, The Roaches or Shutlingsloe. I knew around the Buxton area there was still a little bit of snow lying around. Leaving earlier than needed for the prior two I thought I may have chance to go to Shutlingsloe which requires quite a climb at the start. Shutlingsloe is a fantastic hill, will amazing views from the top and to do it in the snow would top it off. It is a location I had on my radar for sunrise for quite some time.

I drove up the Cat and Fiddle, which was surprisingly clear but at the A54 turn off to get to Wildboarclough, which looked a little more patchy I pulled up and calculated what I needed to do. It was 07:10, which left an hour for sunrise but common sense kicked in which said the roads around Wildboarclough were probably snowy/icey which would take time away, a steep ascent in the snow and I make not make it in time. Worse still, I could drive half way there and either come off the road and let down the people who I were meant to be teaching or have to turn back and not leave myself enough time for sunrise somewhere else.

So I turned back and drove along the A53, past Flash where the snow seemed to be deepest. Looked over to Shutlingsloe, where my heart sank a little and looked further along where I could see the Roaches only had a smattering of snow on the higher ground, not any locations up there decent enough for sunrise. So, Ramshaw Rocks it had to be.

I’ve been to Ramshaw Rocks a lot, I know it liked the back of my hand but despite a few attempts sunrise has always quite eluded me despite it being a good location at this time of the year due to the sun rising over Morridge Moor. Those not familiar with the rocks, they are a gritstone outcrop that stands high above the A53 on the Buxton to Leek road. I approached Ramshaw Rocks and could see at least until the summit there was a fair bit of snow, however it was quite strange because the summit seemed to be where the snow pretty much ended and this was confirmed after pulling up behind Ramshaw Rocks. I did consider trying to go somewhere else at this point, but knew better and decided to stick to it.

I made what turned out to be quite a tricky ascent, any snow that had previously been there had turned to ice which seemed to be at its worst on the paths (how I wish I’d have remembered that I put my microspikes in the loft and not the garage!), but out of breath at the summit it was worth it. The skies were looking fairly clear with a lot of Staffordshire lying under a thin veil of mist. The snow looking to the North towards Flash was very present from the summit, but looking south towards Leek and there were only tiny patches. A real contrast.

I spent a good while playing with compositions and taking pictures in pre-dawn glow, but ultimately I think most of the time I’m more of a direct light type of photographer and was most at home after the sun made its appearance (late due to a small bank of cloud) and started making pictures  I was happy with at this point.

This first image, is looking down the Ridge to Staffordshire beyond with Hen Cloud on the right. There is a nice bit of snow in the foreground catching the light well and adds for me a nice contrast to the area beyond: 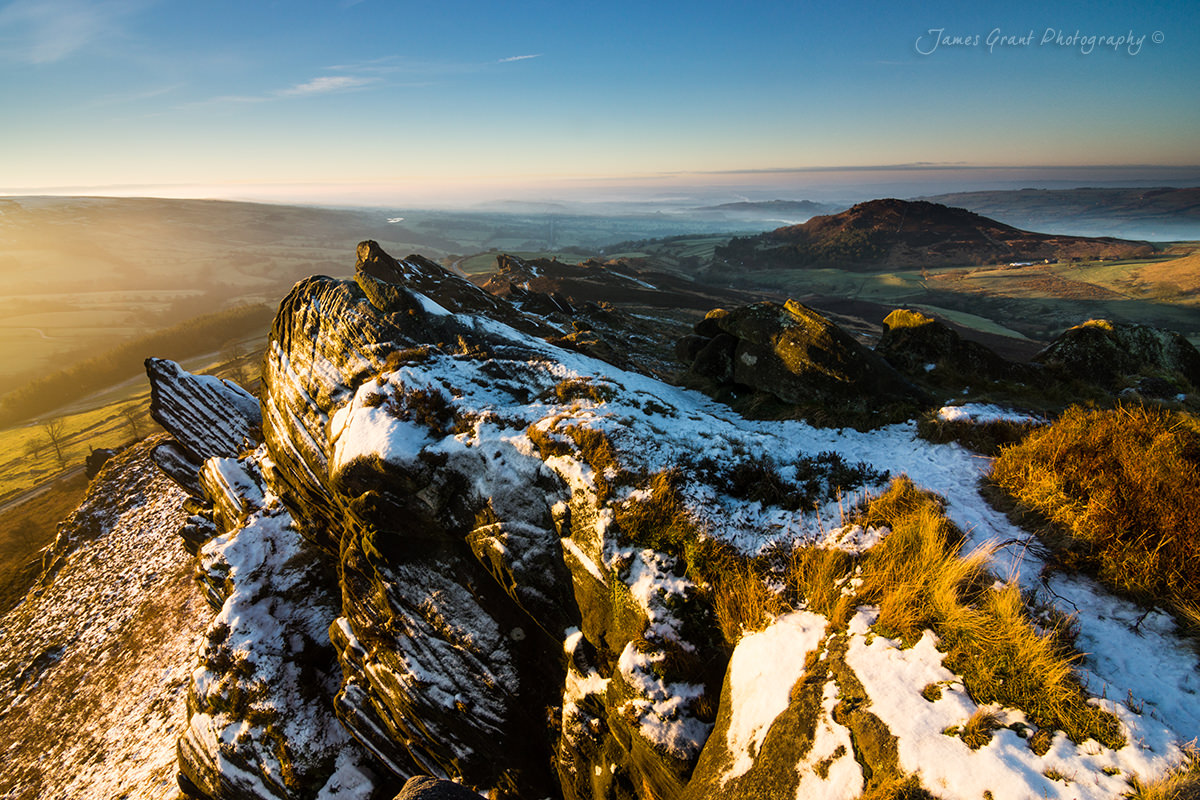 The next image is looking the other way, towards Flash and you can see how much more snow there is and it is a complete contrast compared to the previous image. The warm light is also nice striking the rocks. 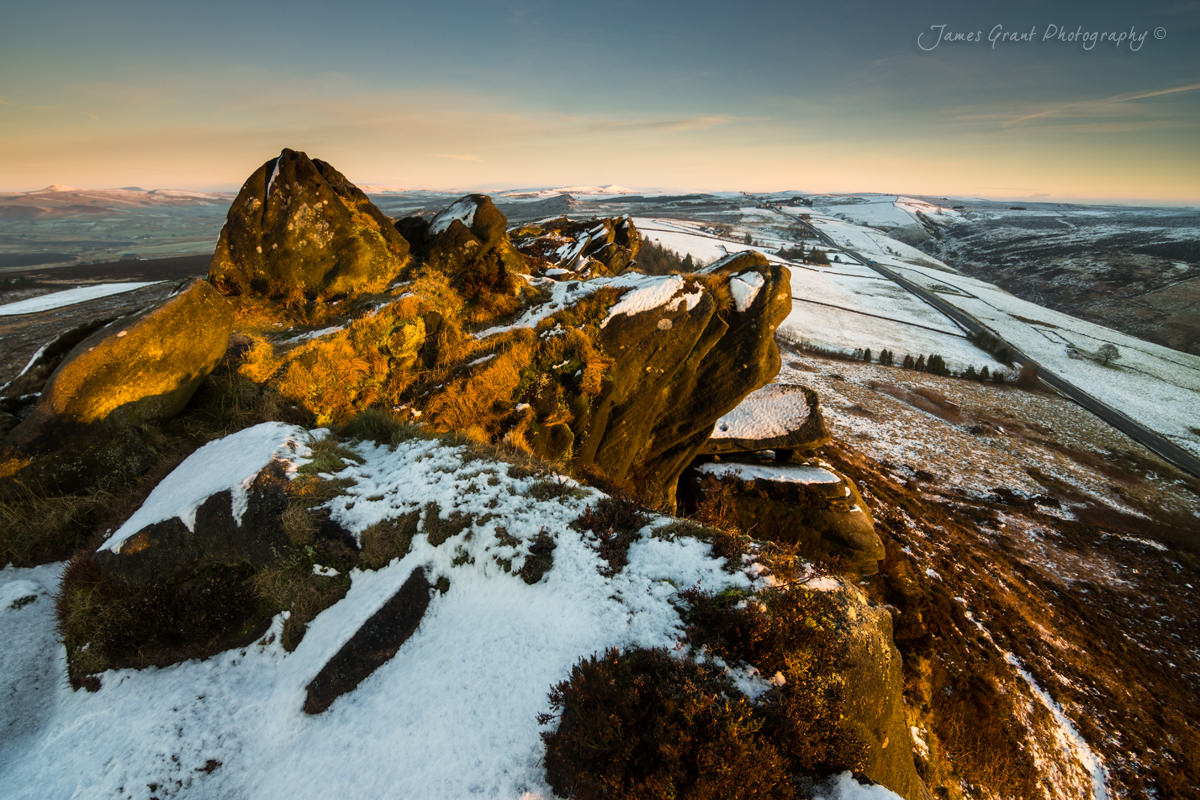 So, it wasn’t a bad sunrise in the end and well worth getting up for. It was time to head over to Monsal Head for tuition and I like the location as the dale offers a number of different subjects which practices various techniques. Driving along I could see over Chapel-En-Le-Frith way there was a bit of a cloud inversion going off with what looked like Kinder Scout beyond just poking out, I was a little gutted but we can’t win them all!

On arrival at Monsal, I waited around in front of the hotel and sat down on one of the benches. I’m definitely not a wildlife photographer, I just simply don’t have the patience and don’t have any interest in animals as such and couldn’t tell you many of the different types of species. However, minding my own business for once I actually noticed that there was a Robin pattering around my feet looking for food (who could not be able to identify a robin?!), and while I may not have had any food I did have my telephoto lens with me and I quickly set up the camera and took some shots of it. This one was my favourite and the robin obviously likes posing! 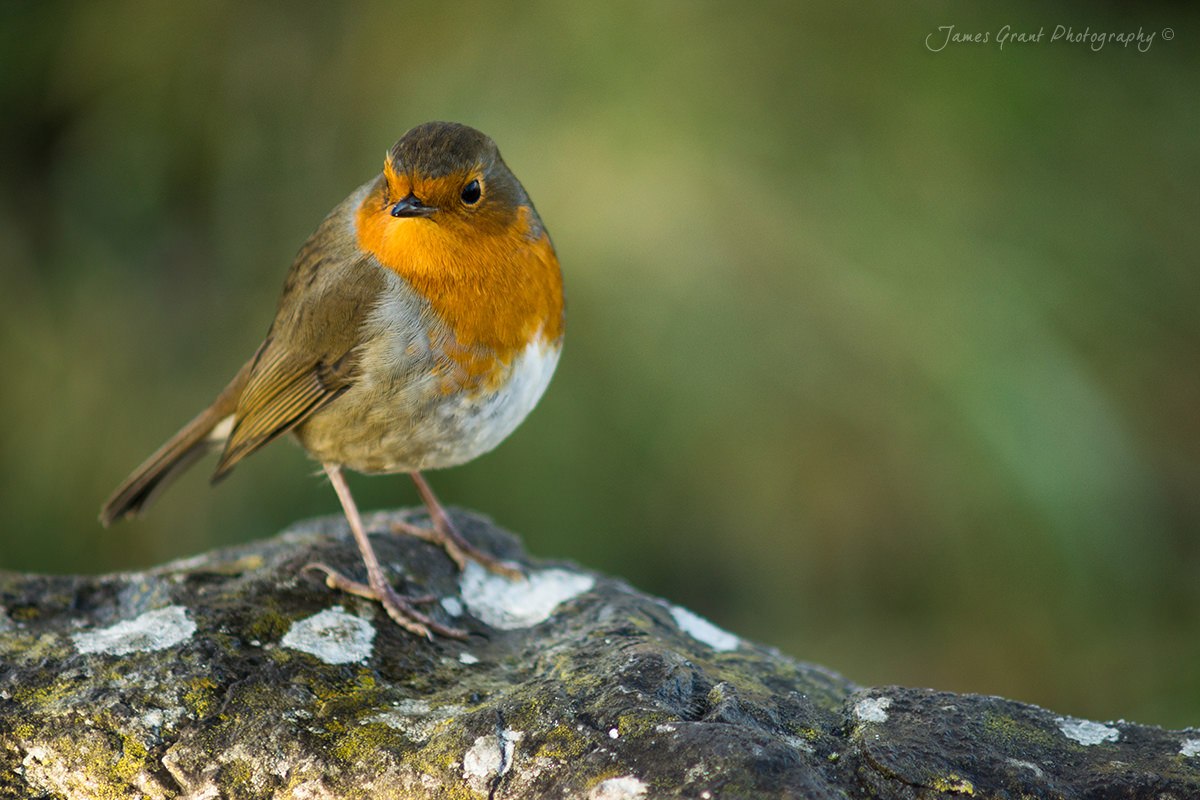 My students turned up and the weather was still good (thanks for getting it wrong Metoffice!) and we spent a good couple of hours in Monsal Dale. We headed up to Curbar for sunset, and though I admit I’ve overshot the area a little its a good location for sunset at any time of year and I know it like the back of my hand. I try not to make too many images while out teaching, but when conditions are fab like they were and I was letting my students use my camera and filters it was too tempting not too while it was all set up.

This first image is further along Curbar Edge than most photos are seen, I quite like how the cliff sort of layer up and Baslow Edge completes the image. There was a little cloud build up by this point which produces nice stormy light, conditions to die for really: 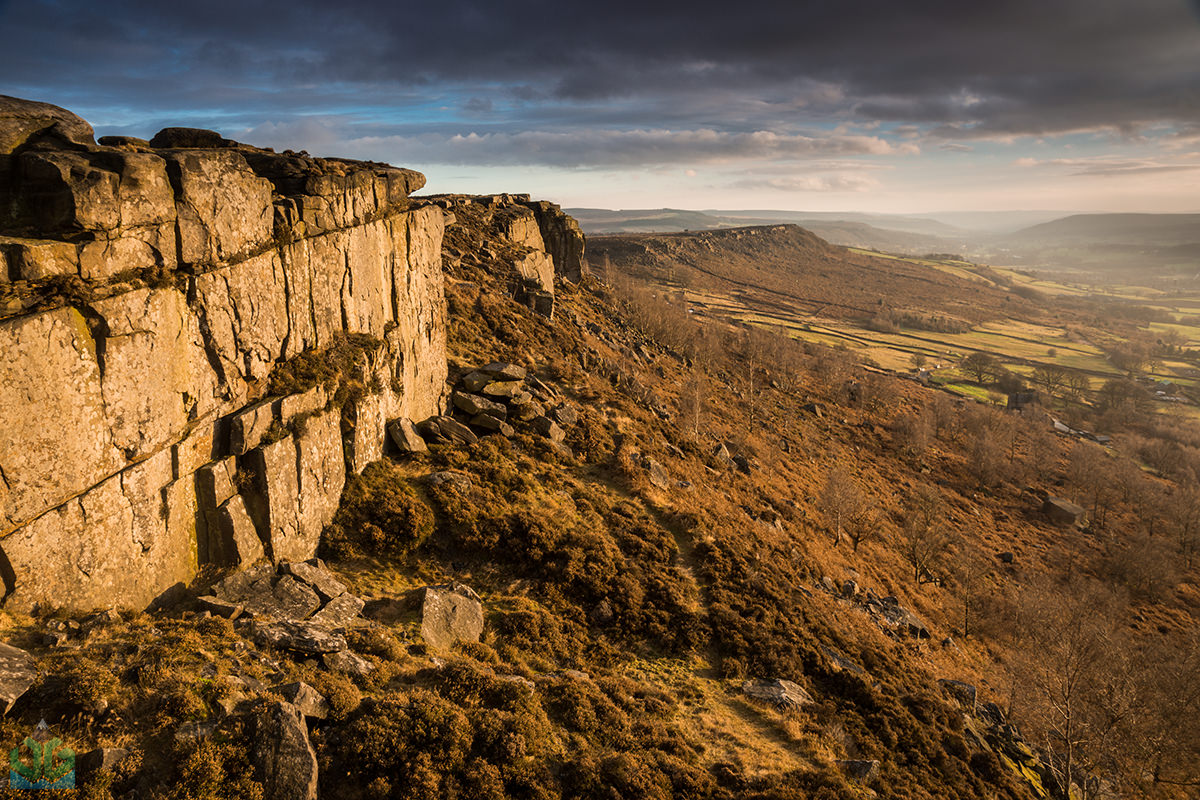 We then moved on to the Pinnacle and there’s a nice millstone above it which makes for a good focal point: 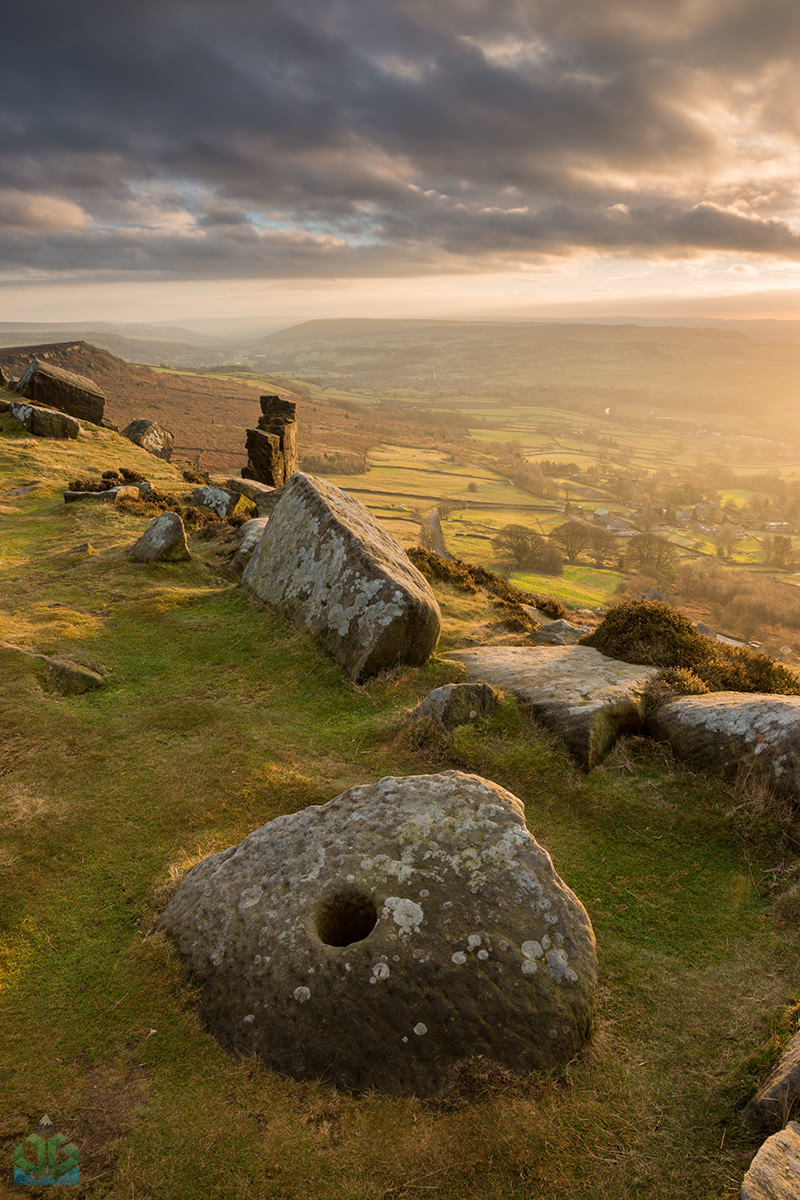 My last shot, comes from just at the side of the Millstone but gives a clear view of the pinnacle and the Derwent Valley beyond. The light at this point was just sublime: 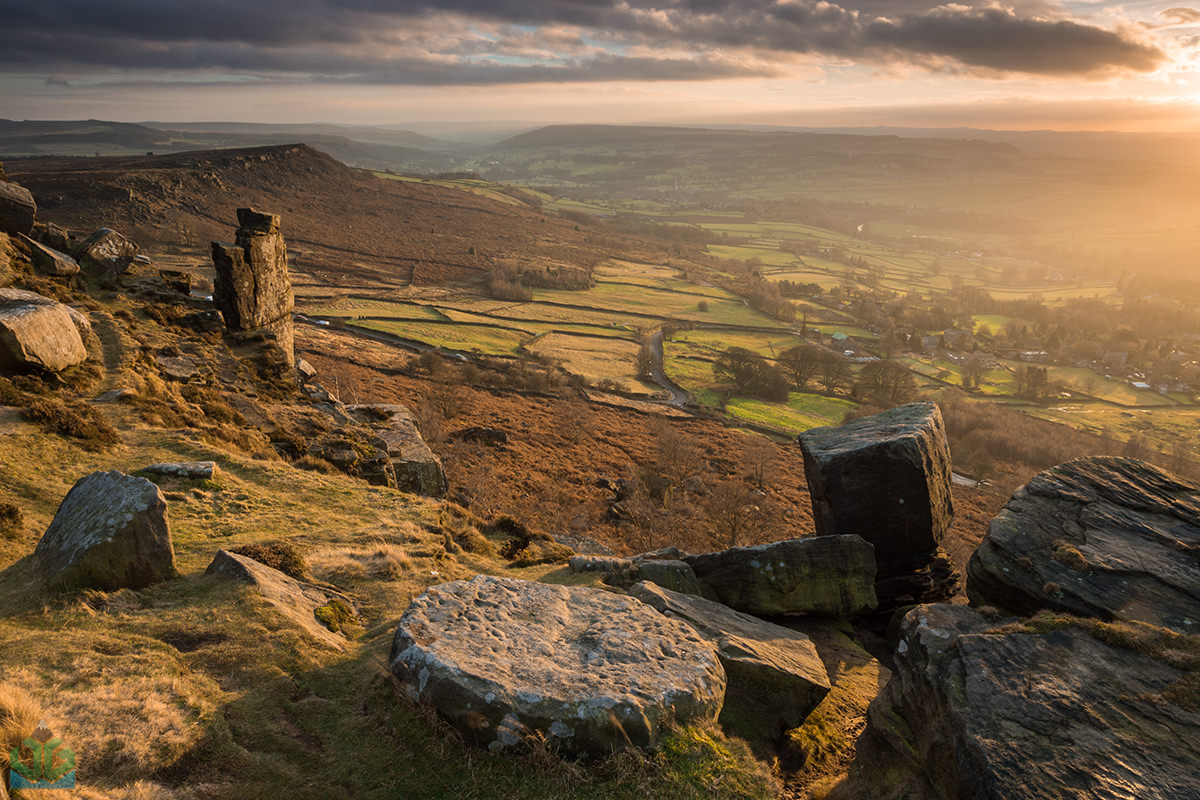 So, like I said at the start, some days are just perfect and this day was one of them with fantastic light all day and a picture of an unexpected Robin to boot. Icing on the cake? My students were very pleased with the day and hopefully they got some good images