Saddleworth Moor isn’t blessed with popularity and doesn’t have stories of joy. Speak to most people and they’ll say bleak, featureless and the moors murders.

However, I was sure there was more to the area than this and had seen a few good pictures of grand landscapes from the area so I had to make a visit. I’d been wanting to go for years but I always seemed to have a reason to procrastinate (mainly because it’s about the furthest point away in the Peak District from my home!!).

I had decided that I wanted to visit the Trinnacle, a gritstone outcrop consiting of three pinnacles which is situated near Ravenstones Brow. I had checked the maps a few times and planned a route so when the weather was decent Saturday I finally made a go for it and had a drive over to Dovestones Reservoir (my original plan had been to park on the road below Aldermans Hill as the route seemed shorter, but I think the ascent on the way back would have been a sting in the tail). I was instantly impressed from Dovestones Reservoir, the surrounding hills were dramatic and steep sided, I had expected softer inclines like Kinder Scout and Bleaklow. I was taking it all in the crsip winter air.

I turned the wrong direction a couple of times, I blame the area and it’s lack of paths not my amazing navigation skills for that! However, I finally got on track (not the way I had planned) and had what seemed like a very steep ascent up to Ashway Rocks. The path was pretty much straight up which is quite hard when you’re carrying a lot of heavy camera gear on your back (I must remember to take out the portrait lens and flash, but you know, good training!).

As I got higher, I took notice of various spots that looked nice, mainly around Ashway Rocks also taking notice that the route I was heading seemed to be in shadow and the Trinnacle may not be a viable shoot. However the higher I got, the colder it got with the boggy paths turning to ice with dustings of snow around.

I did get to near the Trinnacle but as suspected it was in shadow so I decided I needed to make my way back, already behind schedule despite leaving plenty of time due to the wrong turns and steeper than expected walk, however on the way back I did take the below picture which caught my eye as the contrast of the wintry hillside crossed with the late autumnal colours in the distance really struck me. 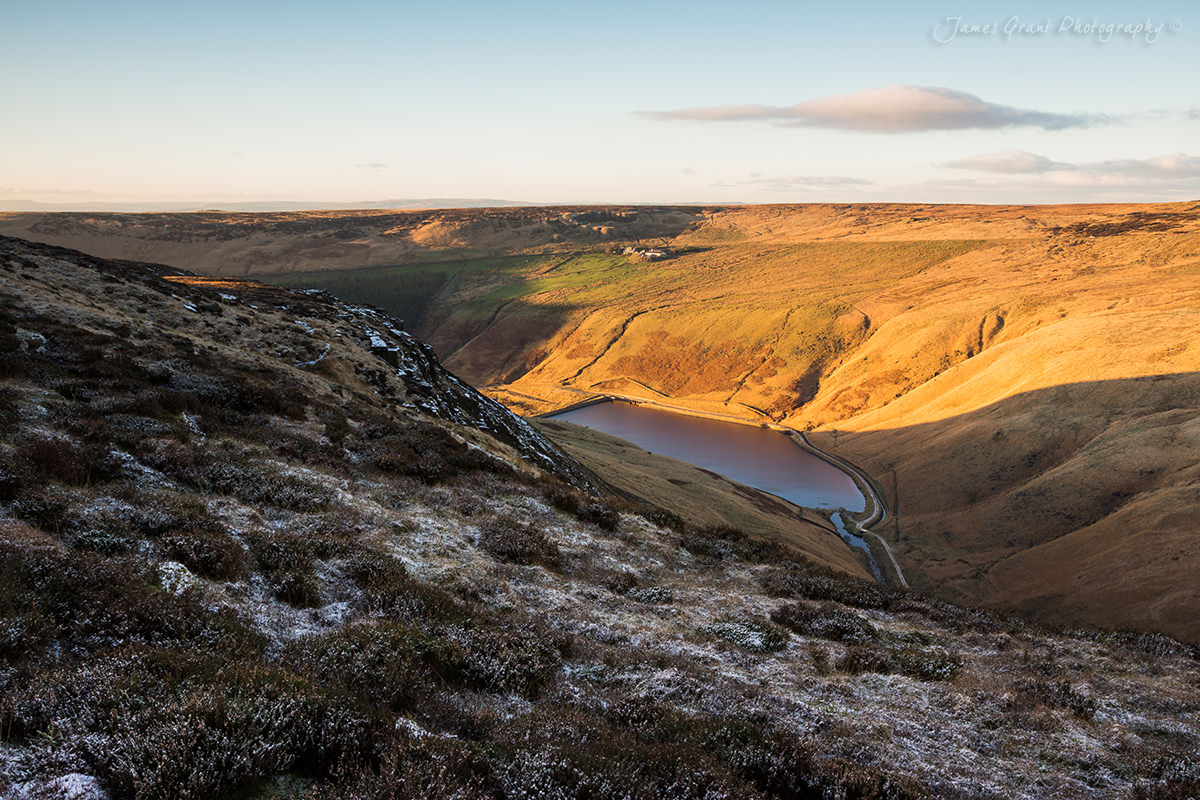 So I had decided the best place to settle for sunset was Ashway Rocks which overlooks Yeoman Hay Reservoir and Dovestones Reservoir with a cracking view over to Aldermans Hill and Dovestone Ridge. The sun was setting over Dovestone Ridge making it very difficult to get a shot without the sun in, however as the skies were clear and the sun quite strong I decided not to use any of the pictures I had composed looking into the sun and came up with the following two which used some nice warm side lighting  again contrasting with the light dusting of snow. 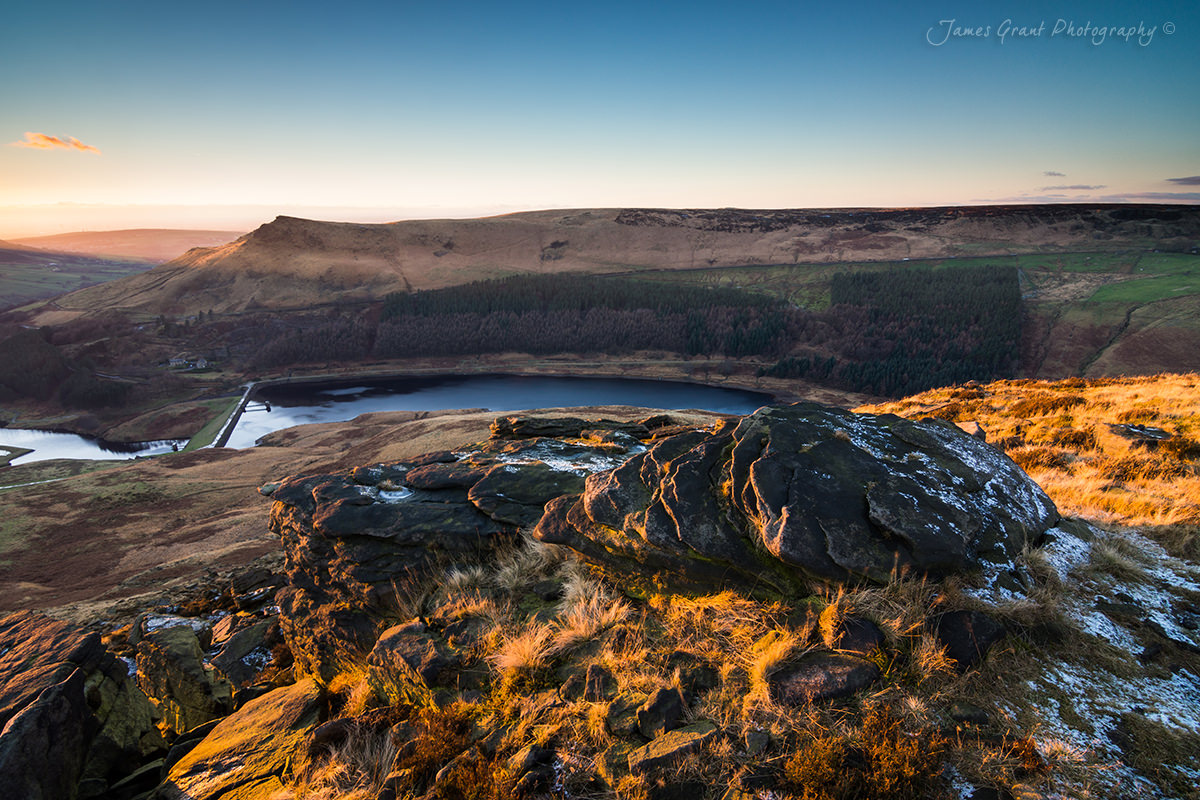 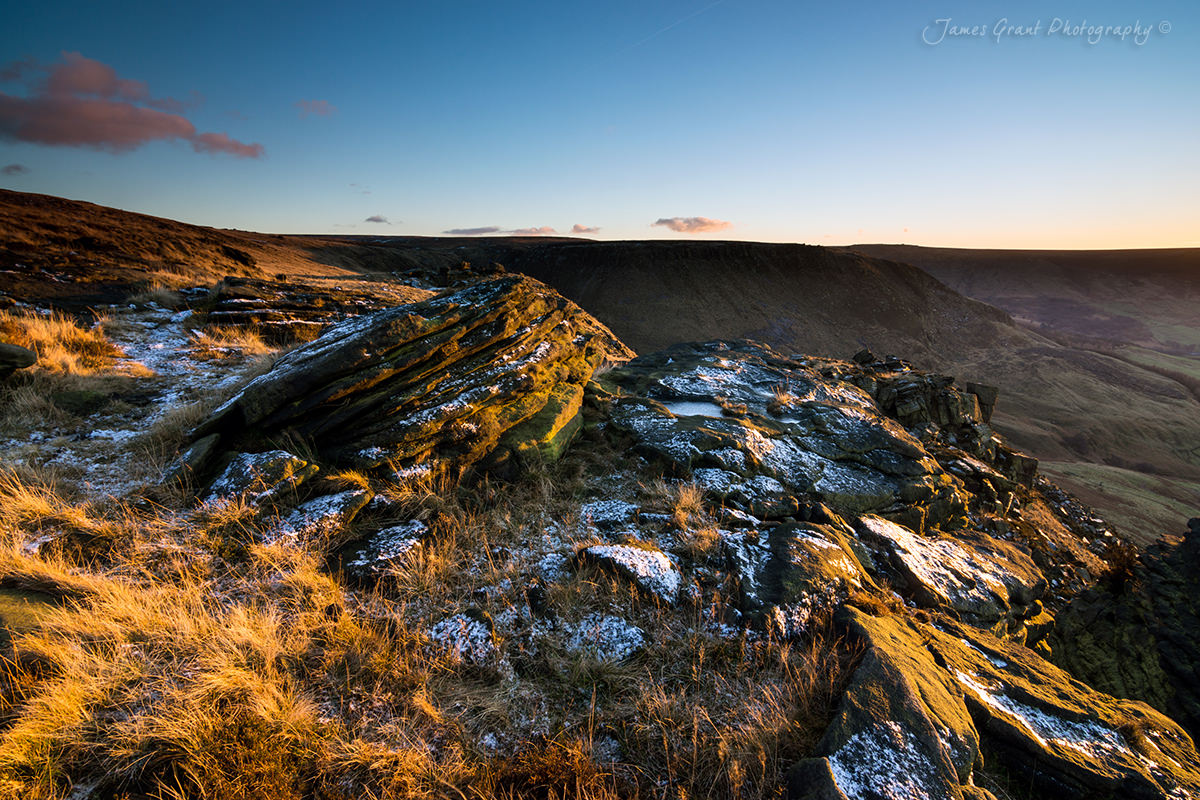 So, in summary it was nice to have a trip out somewhere new and I look forward to going back to Saddleworth Moor and the surrounding areas very soon. I feel now I know the area and the lay of the hills better, I can start to plan areas a little more in terms of position of the sun etc rather than winging it. So watch this space.