Wolfscote Hill is a lovely little hill in the White Peak District near the village of Hartington. It is definitely one of the less frequented hills in the Peak District and have yet to meet a single soul on there. It stands only at 388m, but at the top there is a lovely minature version of a limestone pavement. It might not be much in scale compared to those in the Yorkshire Dales but it’s certainly nice to have when in the Peak District we don’t really have any at all so makes for a different photograph that in honesty hasn’t been done very much at all. The views are also very good, as one would expect.

Unfortunately I had caught a bad cold over Christmas (probably from standing under Kinder Downfall?) which paid end to me getting up any hills on Boxing Day when the fantastic foggy conditions were about. Now nothing drives me more stir crazy than being ill and being stuck in, so perhaps a little unwisely I went out the day after boxing day for my trip up Wolfscote Hill. The only problem was that it was incredibly windy but the conditions looked promising for a bit of light.

I parked up at Beresford Dale which to me seems to be the best approach for Wolfscote Hill. Those who want a shot close to the car can forget this location, it’s a good steep un-pathed 30 minute walk from river to summit but I assure you it’s well worth the walk. On the way you cross the River Dove, walk up a small farm track, hop over a fence, pass some nice classic hawthorn trees in limestone outcrops and even some burial cairns before arriving at the trip point to mark the summit of Wolfscote Hill.

This was actually my third visit to Wolfscote Hill, I first visited almost a year ago and I didn’t really get the conditions I wanted. There was a lovely afterglow but not the composition I really wanted as it was facing the wrong way. I then returned in early August and had a bit of a let down so it would be a case of third time lucky. It was good practice to get the composition nailed previously though so I knew exactly where to set up.

On the way up it was apparent I was going to have a battle for the winds, but once I started to reach the crest it got mental. It’s not often I get shifted by the wind but this was knocking me about, making me lose my footing.  Strong winds when you have a cold probably isn’t the best idea. Fortunately, the warmth of the good light was making me feel somewhat better.

Luckily Wolfscote Hill for me is a location that requires a shot low to the ground, to emphasise the textures and scale of the limestone pavement (outcrop). A little trick I used here to try and get an image as sharp as possible in the strong winds was to forget placing the tripod legs where I would usually and to jam them in the fissures of the limestone giving it no where to go. The next thing I did was each time I took a shot was to stand to the side of the tripod to block any wind trying to buffet the tripod. All this said, I was still concerned if I would get any sharp shots at all because I’m struggling to think of a time where I’ve been taking photos in such strong winds except one trip up Shutlingsloe.

The light was really good, with fast passing clouds and despite it being winter the grasses were still looking really green so I think I’ve finally got the shot I wanted, third time round: 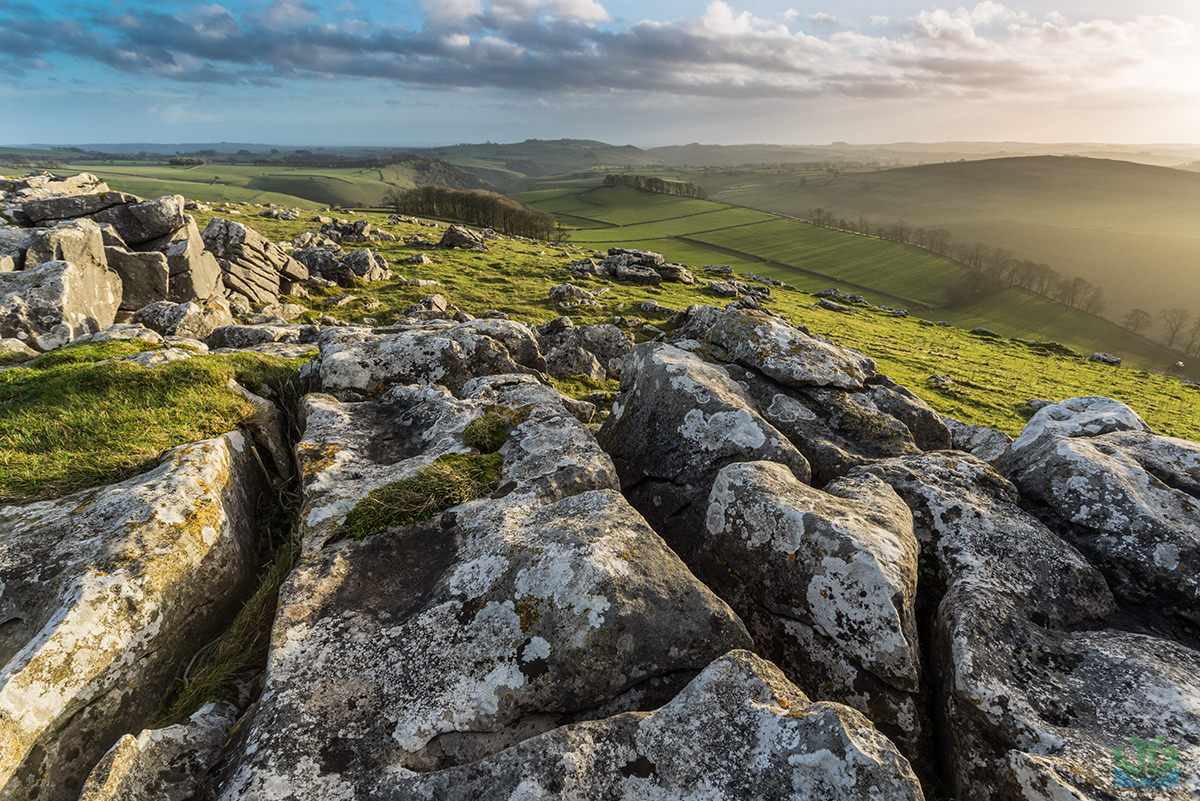