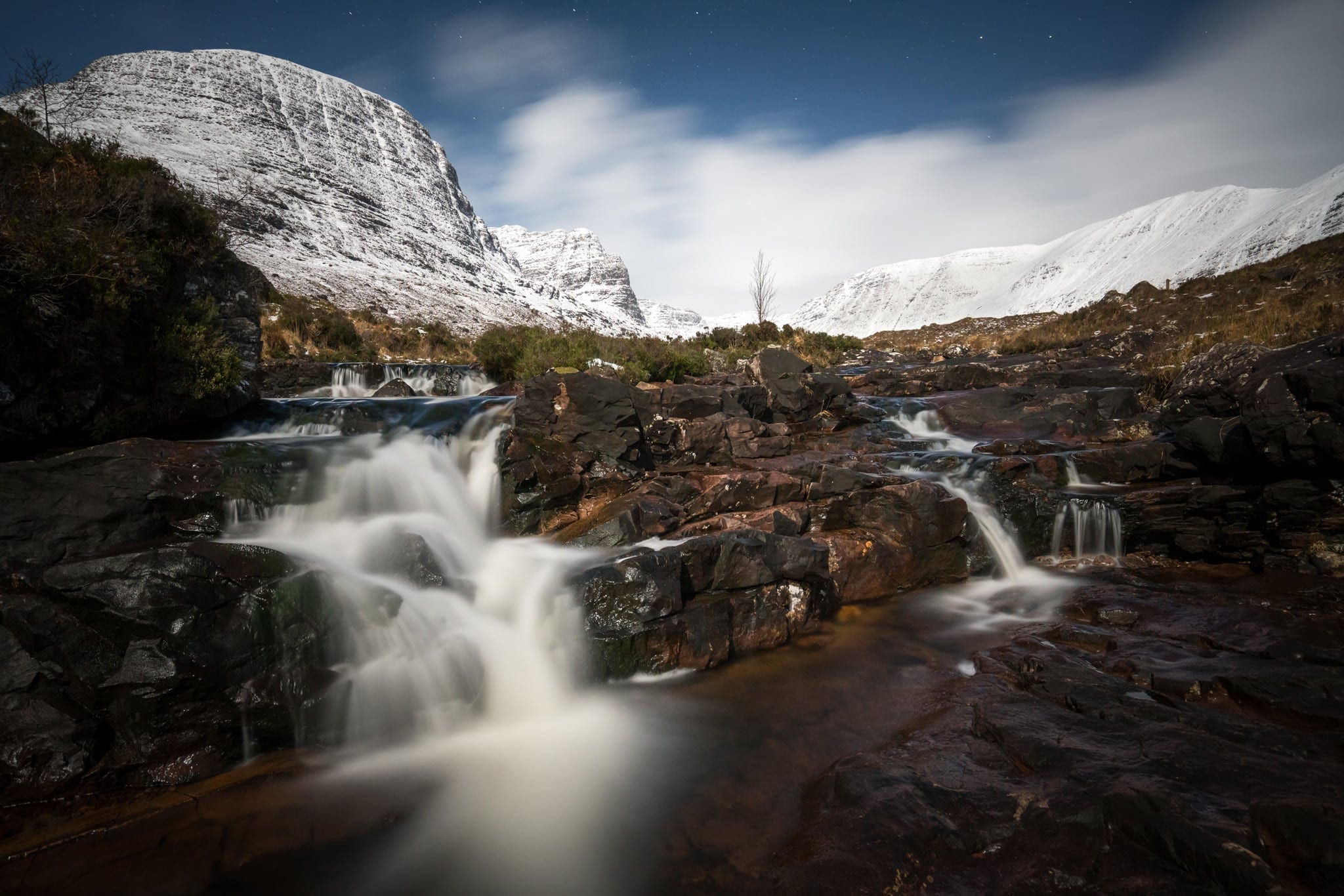 Over the Christmas I made my first proper visit to the Torridon area. I made a fleeting visit driving the coastal road last year and watched the sunset over the Isle of Skye from Bealach Na Ba but we carried on to Asssynt after that.

It had been a place I had wanted to visit for some time now but I had favoured other areas of Scotland instead, I guess this little chunk of what can be remote land was just a little too out of the way at times.

No more though! I wanted to go and there would be no better time than the Christmas period where the would hopefully be some snow (there was!).

So we headed up in our T5 campervan, making a stopover in Glencoe on the way (read that blog here). It was cold when we arrived, and snowy, and icy! Great! We parked up in the Beinn Eighe car park on the first night and settled for the night, grasping on to what little phone signal we had. The next day we awoke and the cloud was low, it was dull and photographically it didn’t look like much was happening. We decided that we would have a lazy day, the forecast showed it wouldn’t clear and so we resigned ourselves. Around 2pm, the van seemed to get lighter, I looked outside and could see light spreading across Beinn Eighe. It was to become a mad rush to van-proof before we could set off, never good when you’re racing for the light.

We wasn’t to get up to anywhere high, instead we took a drive up the road to Loch Clair, a fabulous and somewhat well-shot viewpoint looking towards Beinn Eighe and Liatach. I guess it would have been rude not to take in this view when it was our first visit, especially with such an imposing and fantastic mountain as Liatach. We parked up and rushed down to an archipelago on the loch side. The light danced as I rushed to set up my tripod and I tried a few compositions, not quite getting it right the first few shots. I finally settled on a composition and the sun was getting more golden but the light was less focused on the mountains.  I set up without any filters at first but quickly decided I needed something to slow my shutter speed down so I could smooth the water out. I opted for a Kase Filters 6 stop filter which would smooth the water out suitably as it was quite windy. I came up with the below image. 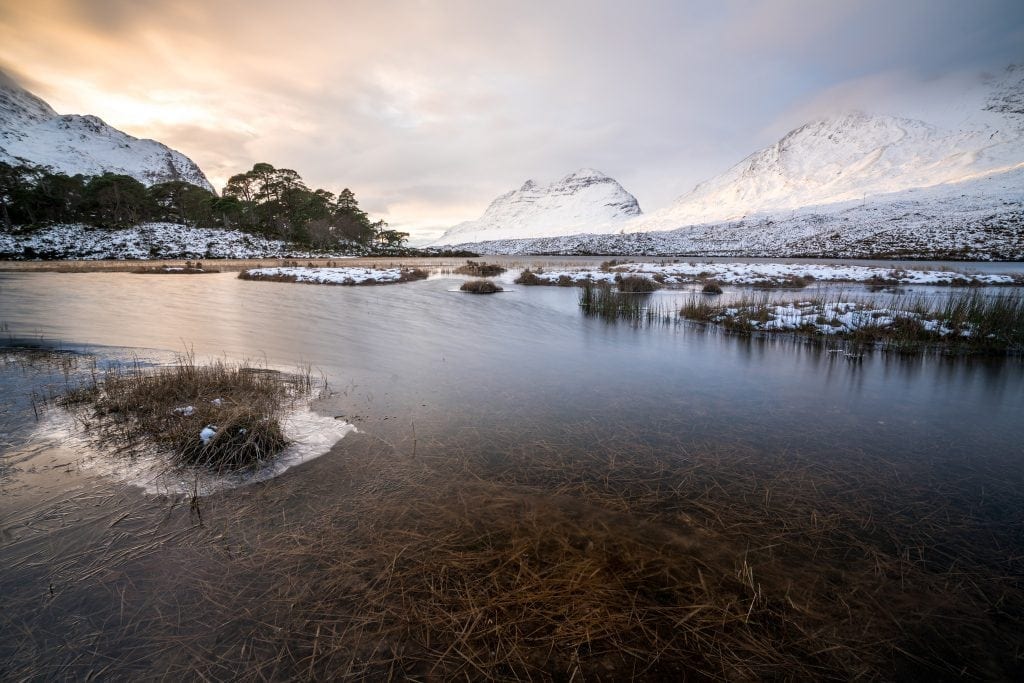 Believe it or not, I only made two images during my time in Torridon which looking back at it feels a little disappointing but we did attempt both Beinn Eighe and An Teallach and had to turn back due to poor conditions. The next image is from Russel Burn, a waterfall/river at the base of Bealach Na Ba, the mountain pass leading to Applecross.

I had seen a few photos of this waterfall and also drove past it last year. When I visited last year, the water levels were super low and the water hardly flowing so we just simply drove past. Because of it’s location, it’s not a spot you can just nip to which I often dreamt of driving back from numerous trips to the Isle of Skye. So, we decided that we would drive after sunset to the waterfall and spend the night and shoot sunrise there. We got there and I could see shadows and light dancing on the mountains under the almost full moon and not wanting to let an opportunity pass, I decided to shoot it under the night sky which incidentally was something I hadn’t seen done before. It’s always nice to find a new (hopefully) angle on a popular scene.

It wasn’t too cold an evening despite the snow and I was really pleased to be out shooting. I again tried a few different compositions, testing different exposure times and apertures, trying to get the balance between depth of field and movement in the clouds right. Eventually I settled on this: 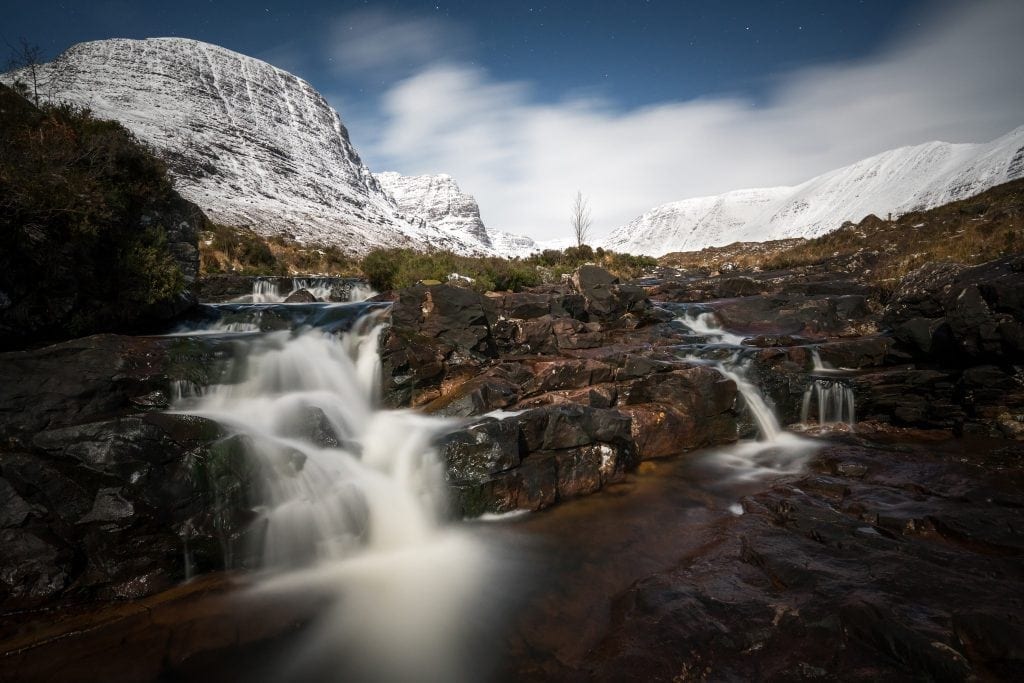 I don’t think it will be too long before I visit Torridon again, especially to tick off those mountain summits. Maybe next month if the weather forecast looks good!

Thanks for reading and looking. I hope you enjoyed the post.