A few weeks ago I headed up to the mighty Alport Castles just off the Snake Pass a stones throw away from Ladybower Reservoir. Alport Castles is an amazing place, secluded, a little off the beaten track and quite often you can have the place to yourself. It is also reputed to be one of the largest landslips in the UK, even though some people even claim it as the biggest I’m pretty sure the likes of the Quaraing on the Isle Of Skye is much bigger.

I had been to Saddleworth in the morning for sunrise, but was beaten by clag, rain, snow and no sun…damn! Heading back, I went over the Snake Pass and as the snow was unexpected the road just hadn’t been gritted and the speed of the traffic got down to 10mph at some points, going no more than 20 in the worst parts of the snow on the road! You wouldn’t think it given the lack of the white stuff we’ve had this year (time yet, as we well know it’s not uncommon to get a big dumping in April!).

I started off by cheekily popping into the Snake Pass Inn first off with a friend, I said I didn’t want anything to eat being on a diet. Next thing I knew over they came with a bowl of their chunky chips which they had “spare”, I have to say they were lovely! I couldn’t turn away free food could I? That’d be rude!

But it was time to start the ascent, I parked at Alport Bridge at the side of the Snake Pass and Kinder Scout was wearing its fabulous winter coat. Despite being early in the day, the winter clouds and low sun provided a lot of great lighting. I set off crossing the road, heading down the valley towards Alport Farm before starting my ascent.

I had been previously and got some good shots I was pleased with, but there was one location I really wanted to try and tick off and that was Alport Pool below the castles themselves, even at 13:30 the light was stupidly good so it meant I was able to get a shot here and carry on working until sunset higher up. 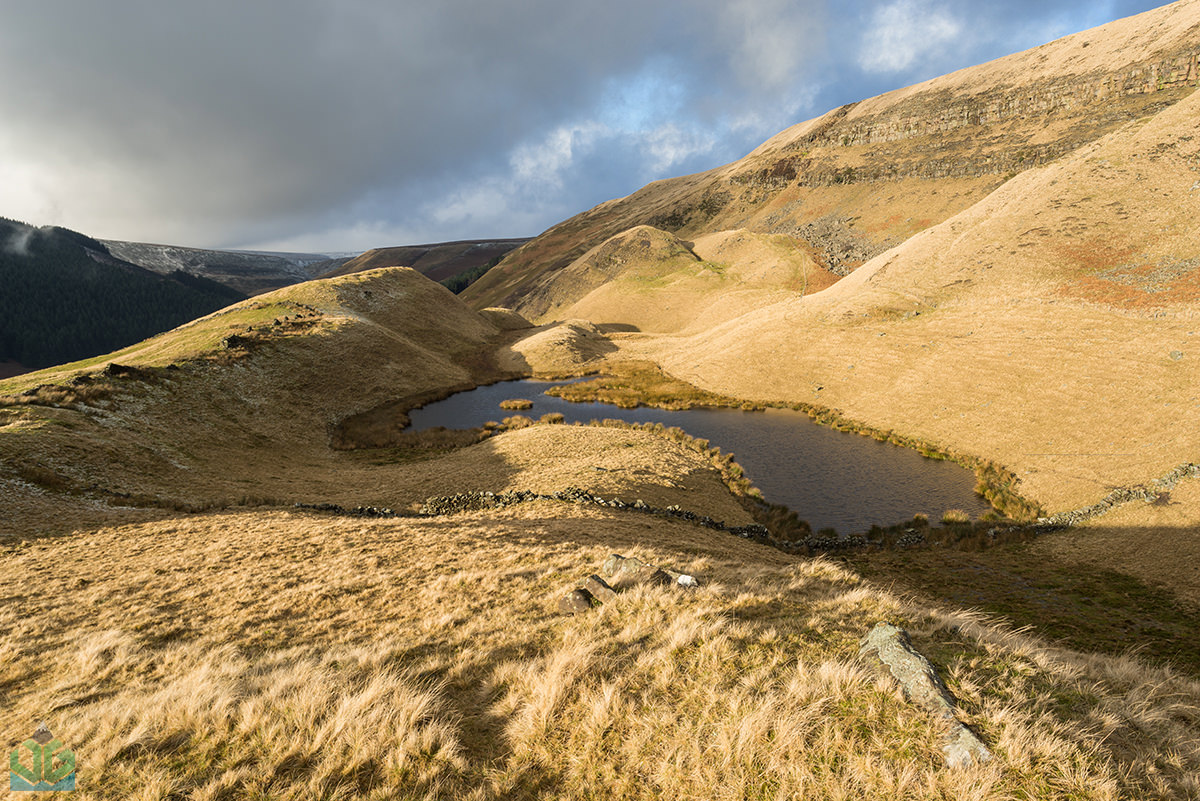 As you can see, the light was just great with perfect clouds etc. Really suited the scene. Once I was happy with this image, I headed off up to go to the top but on the way spotted a view looking back down the valley towards the Snake Pass with Kinder Scout beyond. The tree particularly caught my attention but there was strong backlighting. I then spotted this little mound with reeds of grass growing round it, almost framing it and the in the end consequently allowed me to frame my whole picture, it’s always nice to spot compositions you hadn’t planned to and haven’t seen before: 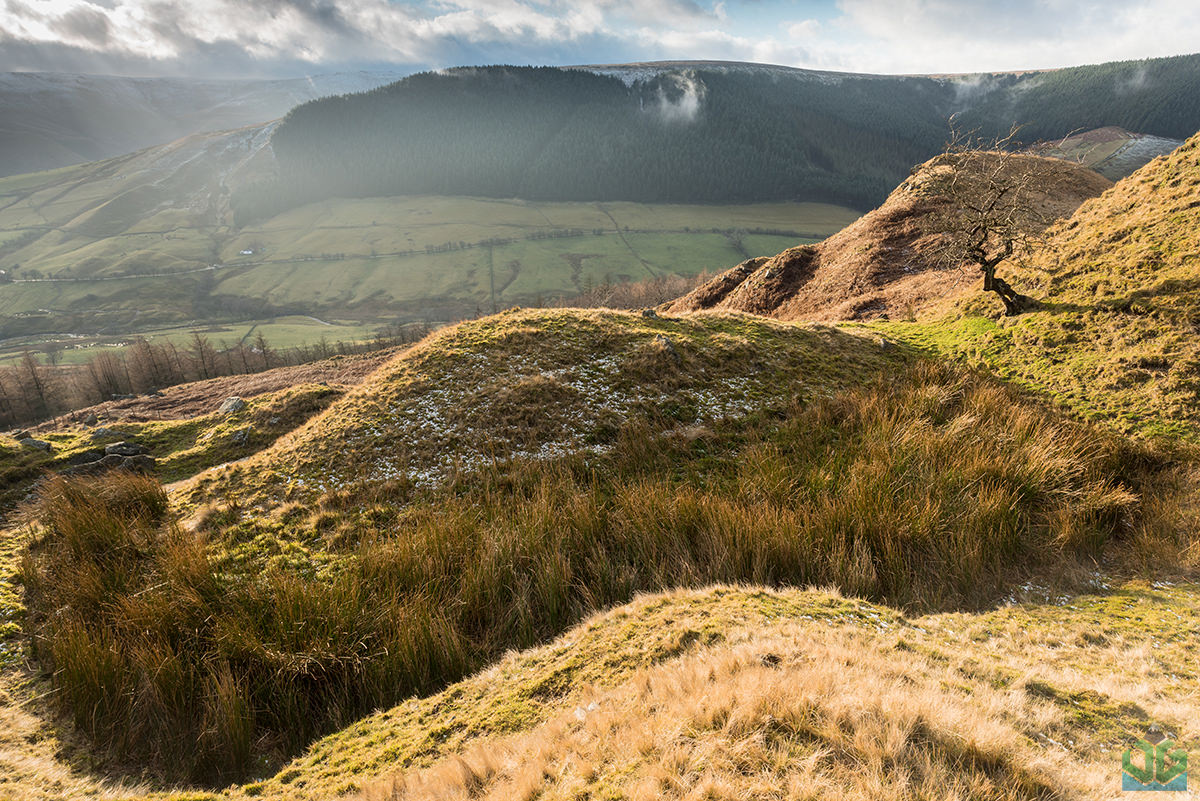 I think the rays of light added a lot to the image as well. Next I headed off up to the top, I usually stand on the edge of the landslip on the west side, the more common view but my friend introduced me to a new spot overlooking the landslip and it was a good choice and also enabled me to catch a view I hadn’t done before. I opted for a panoramic here, as I felt a normal ratio photo felt compositionally tough and unbalanced with the tower being mid frame in a 3×2 ratio photo. The panoramic also allowed me to squeeze in the pool on the left as well as conveying the whole scene, but the finishing touch for me has to be the two figures you can just spot below showing you the huge sense of scale of the area (click image to make large): 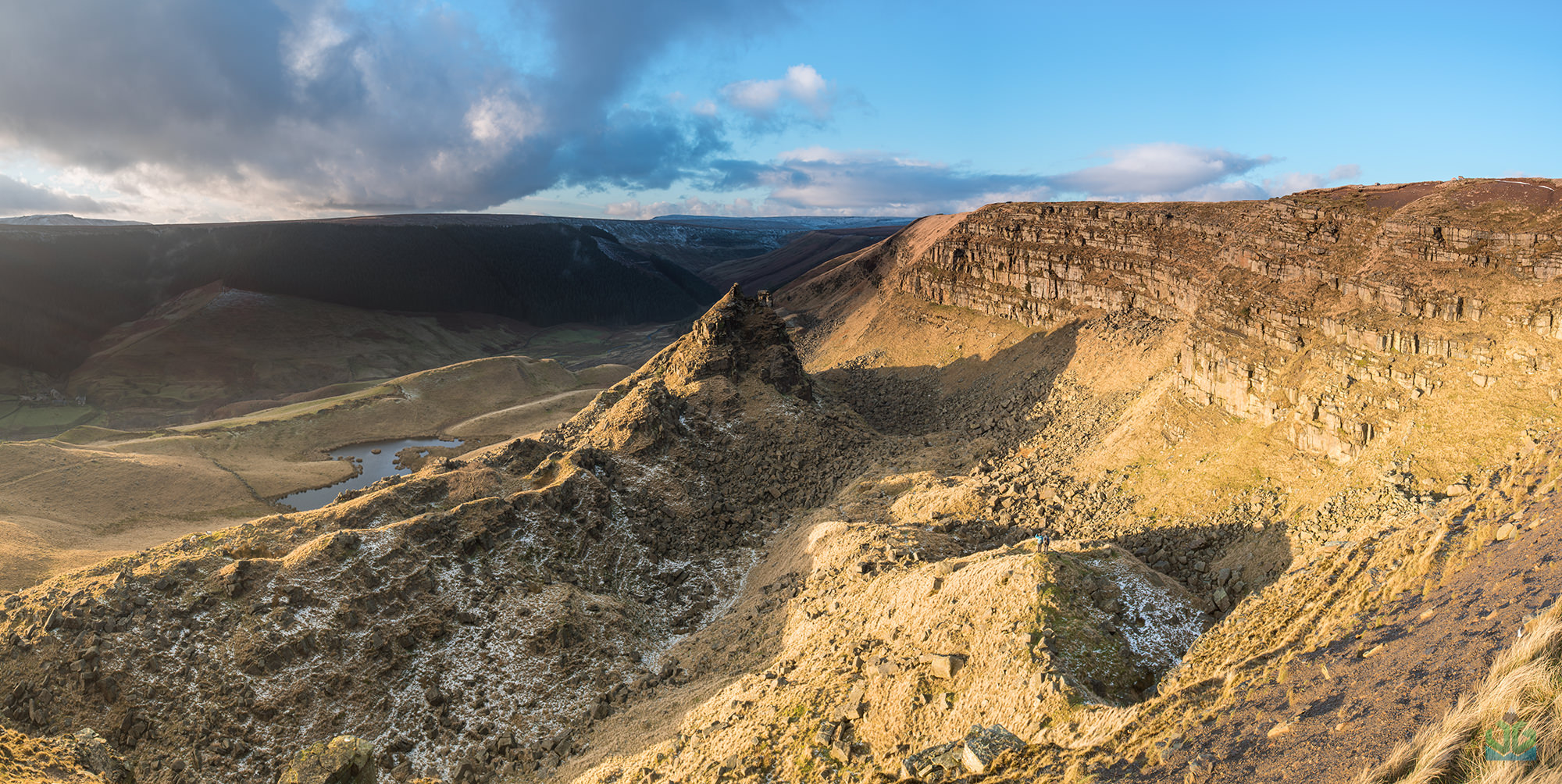 You can see more about this fantastic geological site here