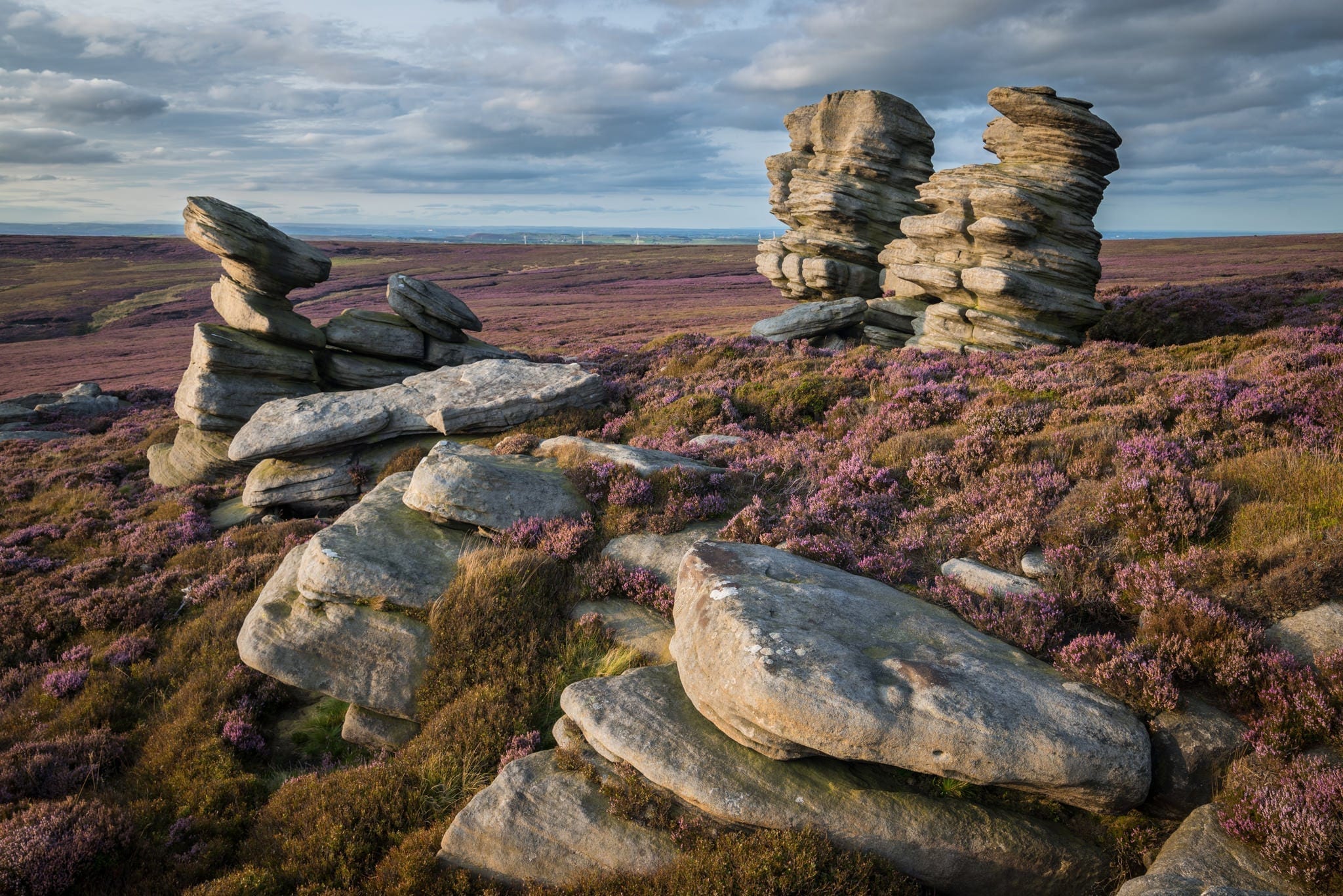 The Peak District offers up some of the most accessible hillside viewpoints in the country, getting up high and walking from the car is usually no problem. Of course, this means that on any given day, especially at the weekend, these viewpoints are likely to be busy.

I’ve never been afraid of walking to my viewpoints. I admit there are some days when I sit at home, feeling lazy and the thought of a short trip out is tantalising but on the days I do get out and walk that bit further, I often come home feeling refreshed and all my worries are cleared. I really do enjoy the walk as much as the photography and that’s always an important part to me, enjoying the outdoors and trying to remember why I got into landscape photography. That’s not to say there’s anything wrong with the easier viewpoints but there’s a certain satisfaction to walking to a viewpoint, having a hill or place to yourself as if you own the place for those few moments and then the sun breaking through, allowing you to capture a shot that perhaps only you will have captured in those conditions, and usually only a handful of photographers will have shots from there on the whole.

My latest venture would be the Rocking Stones and the Crow Stones high up on the Howden Moors. These fantastic formations are at least an hours walk from the car and often over boggy moorland rather than proper footpaths. Because I’m not restricted to weekends, the access is easier for me, parking up at the top end of Howden Reservoir which is only accessible by car Monday to Friday. This was to be my second visit here, the previous time the light fizzled out to nothing.

I arrived with a bit of time to spare and made good progress walking up, feeling fit despite piling on weight in the last few months. I guess 6 days in a row in the Peak must have built some fitness! I walked up Broadhead Clough but the path soon became steeper and as it was grassy, not that easy going and I started to slow down. I tried diverting left to shortcut to the Rocking Stones but soon turned back, getting stuck in heather and fern with multiple hidden holes. I eventually got to the top path and it became a lot easier going from here.

I saw the Rocking Stones and Crow Stones come into view and low and behold saw another photographer already set up. I couldn’t believe it, although I must say I did think I saw someone from the valley on my way up. I could see some long dreadlocks and thought it could only be Paul Newcombe, which it was. Paul has some excellent work and we haven’t bumped into each other since 2012. You can check out his work here.

So I thought it was going to be a quiet affair after all I said above, however in seriousness I didn’t mind having Paul as company as we frequently exchange comments over on Flickr. We had both gone up for the same reason, to photograph the heather surrounding the stones.

A few months back, I saw someone post a shot of this area calling it the Crow Stones and another individual jumped on board praising that they had called it the correct formation, rather than the Rocking Stones which were further away. I had always associated it with the Rocking Stones and couldn’t see where the Rocking Stones would be otherwise. After some looking around and discussion with Paul, we could only assume the formation on the left was the rocking stone and the ones on the right was the Crow Stones, which would make sense. The left one certainly fits the description of Rocking Stone. I also felt that Ordnance Survey simply could not fit the text so close together. Anyway, after further discussion, especially with Paul Besley a well known Peak District guidebook author, my instincts were right and I am glad to have cleared it up.

Anyway, here is my first shot and the one I had went up for. 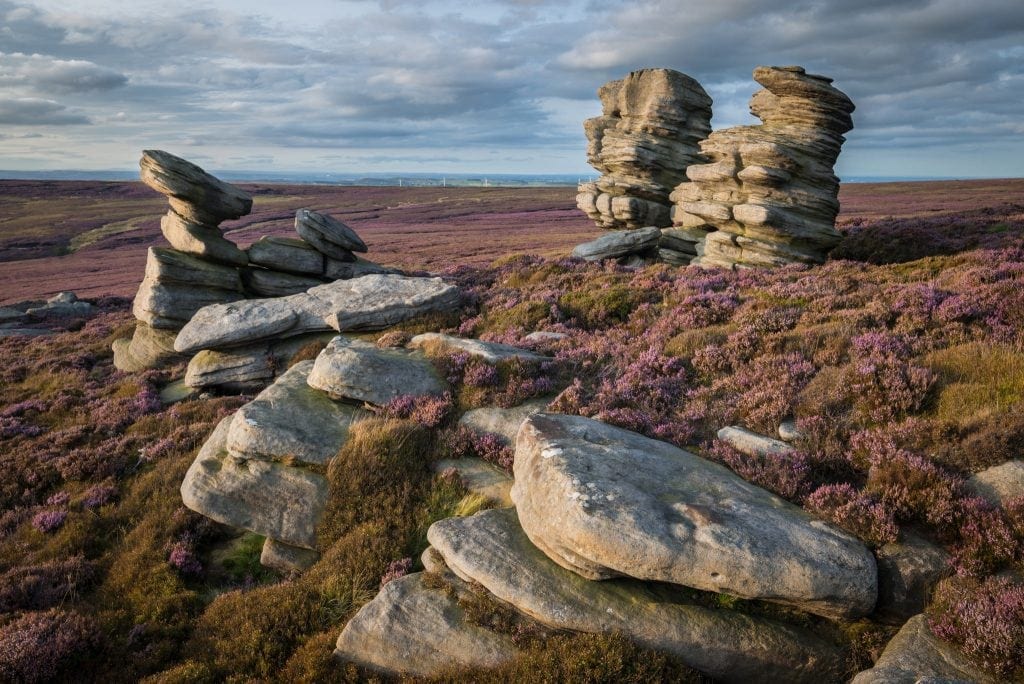 I tried many compositions on the evening, here is a little wider of a shot which includes a little more of that glorious heather: 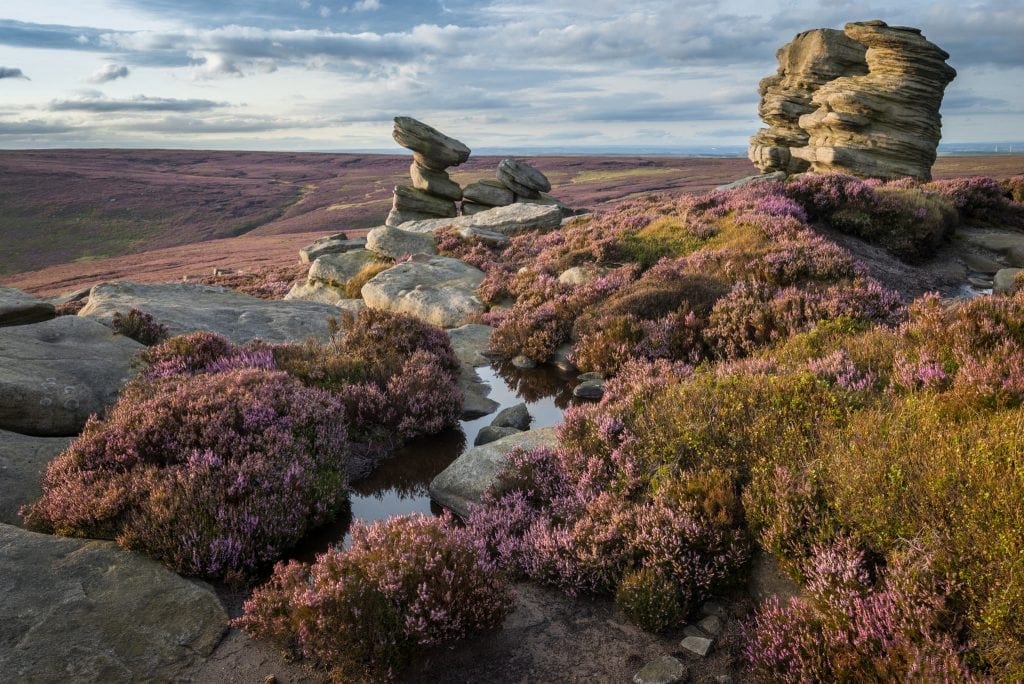 After this the clouds started to break up and even though the light became a little more golden and so it wasn’t quite as flattering. On the way up to the Rocking and Crow Stones, about 5 minutes prior to arriving you pass a little rocky outcrop which looks like there is potential for a shot. This is Crow Stones Edge. Given I had some spare time to kill, I rushed back here (Paul had actually shot it on his way in) and tried to make the most of the remaining clouds. It’s a lovely view from here, looking down the Upper Derwent Valley over Howden, Derwent and Ladybower Reservoir, over to much more familiar landmarks such as Win Hill. 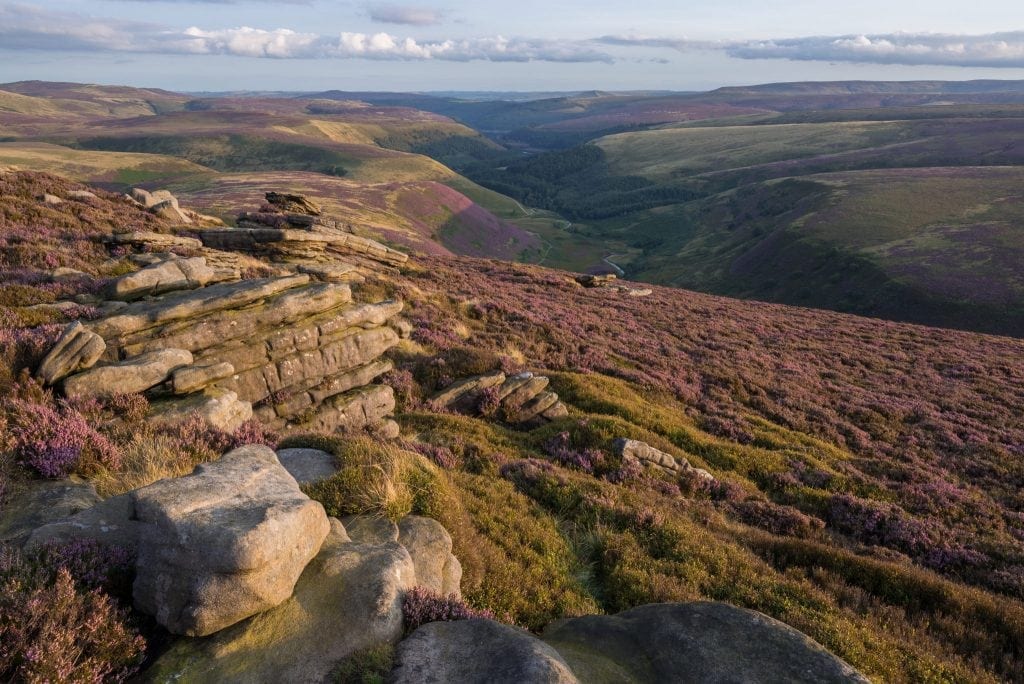 The sun would vanish into a bank of cloud meaning we set off a little early back to the car but still arrived back in the dark, the return journey is unusually not much quicker than the journey in. However, I was glad to have ticked this one off with the heather. Maybe I’ll return to it in the snow but for now I’m happy.

4 thoughts on “The Rocking Stones and Crow Stones”