Dove Dale (aka Dovedale) is a popular tourist honeypot and rightly so. With steep sided limestone hills and crystal clear waters running through it, what’s not to like? Coupled with easy access, it’s easy to see why in the middle-of-the-day at the weekend it’s bustling. All this said, for photographer’s it’s one of the quieter and less shot locations and I’m not quite sure why. Maybe it’s because it’s White Peak, maybe it’s because it’s down at the most southern part of the Peak District or maybe it’s just a location that works you hard for your shot?

I’m not going to say it’s one of the best places in the Peak District to photograph, but it certainly has a lot to offer. At the stepping stones, the hill of Thorpe Cloud rises sharply from the valley floor and is a fair old slog to get up if you head up from here. I remember as a kid, my dad driving past the hill and me asking “Is that a mountain?”. Looking back, it seems silly but it does give you an idea about its profile. From the top, you are offered expansive views down the dale with dramatic drops.

With Dove Dale though, if you go up Thorpe Cloud and go out at sunset (or sunrise) you quickly get away from the clouds and you’ll more than likely have the area to yourself.

I went a couple of weeks ago to try and capture a sunset on Thorpe Cloud. I had shot the location a few times, my most successful time being in May 2012, but as it was clear skies I was after something a little more dramatic. I visited once recently and it was a no show from the sun but headed back with a small bit of hope for something special.

Last time, I tried parking down near the main car park and it’s now shut at 19:30 with barriers. I wanted to park down here as I felt if I got there early enough I could shoot Thorpe Cloud from the dale while the sun was high enough and then rush up to the summit for sunset. I didn’t make the same mistake twice and on my second visit I decided to park up top near the Derbyshire Dales short stay and took the easier route. Well, I say easier, I still decided to have a walk down Lin Dale and onwards to the stepping stones. On arriving, it was quite busy and I realised it was the school holiday’s. After deciding the sun wasn’t coming out any time soon and if it did it would probably be with kids paddling in the water, it was best to just make the steep slog up Thorpe Cloud.

I got to the top and the clouds looked exactly as they did a week before, with one patch of blue sky over towards Ashbourne. I thought at this point it was going to be another pointless trip but thought I would hang around anyway. I could see a small gap opening on the horizon, but would the wind blow the cloud, closing it up before the sun got to it?

Fortunately, patience paid off and quite soon the light broke through and was super rich. At first, it caught just the limestone summit of Thorpe Cloud leaving the rest of the dale in shadow. In the distance over towards Wetton Hill and Wolfscote Hill the light looked incredible. I was definitely in my element and is probably my favourite kind of light to be shooting in. 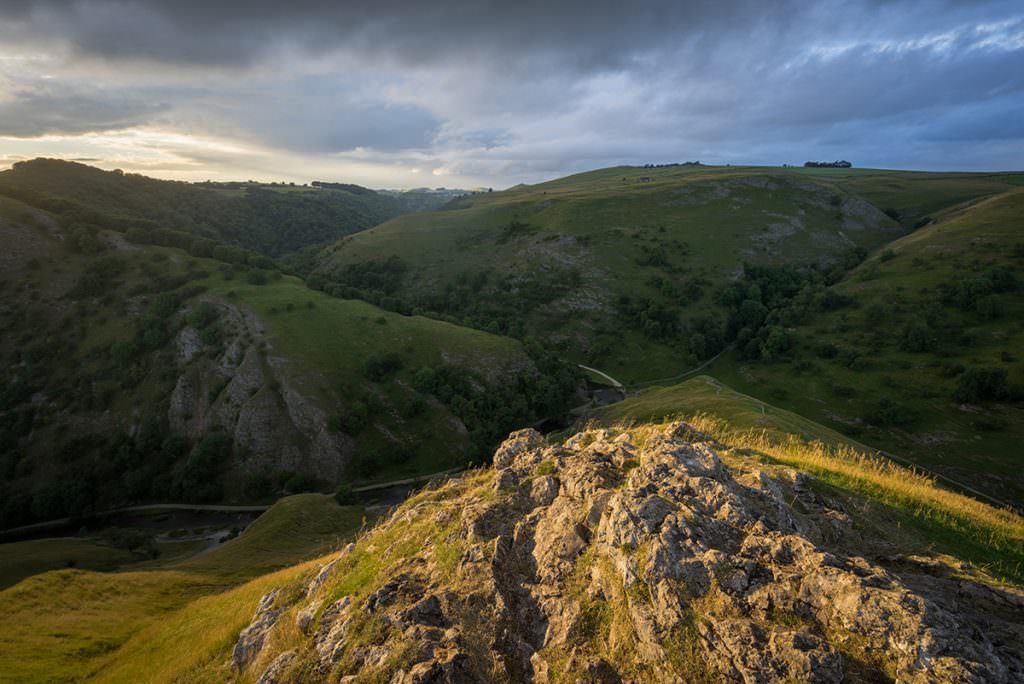 I waited around a little longer after the sun quickly went in and the clouds really started to break up. I set myself up for a panoramic shot, making sure everything was level and composed to ensure the perspective wasn’t too wide. The sun came through again and the light down near Ilam really caught my eyes.

The next and final shot from the evening I hadn’t intended on shooting. It’s more of a sunrise shot, due to the sun being behind me at this point but I spotted a small rainbow and the amazing look cloud overhead. It would have been rude not to take a shot. I struggled keeping my shadow out of the shot, which affected my composition a little. Probably not a shot I’ll use in my portfolio, but at the end of the day, it also makes a memory and for me that’s what half of doing photography is about. 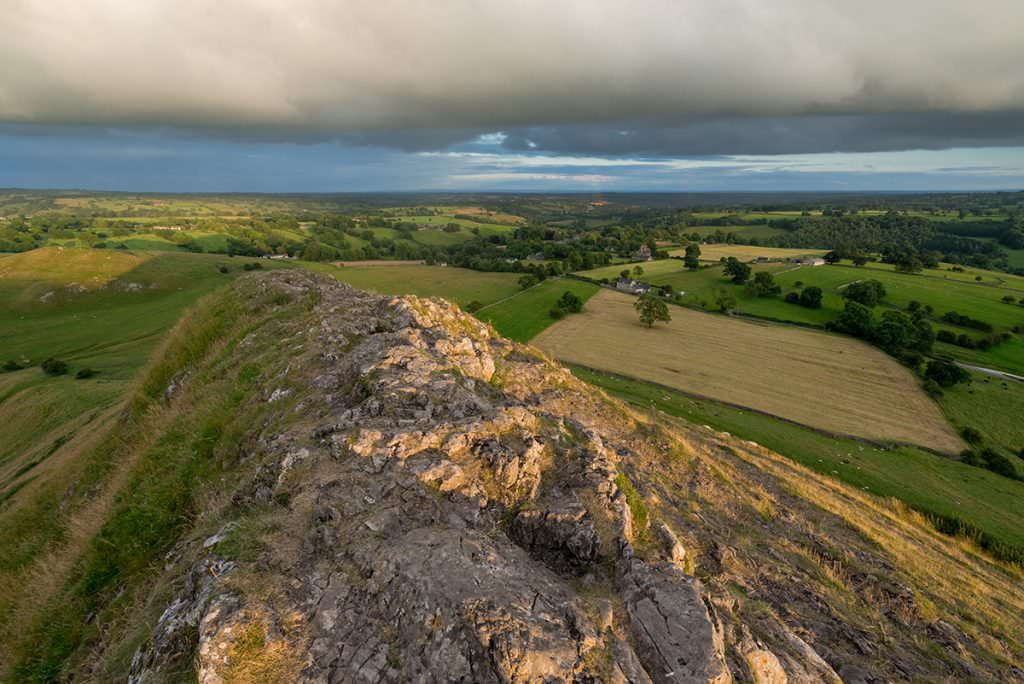 Shortly after, it was all done really and I took the nice shorter route off the summit this time and headed back to my car. What a great evening to get out and I’m hoping for more conditions like this soon, although the heatwave predicted will probably keep me indoors!

You can buy a copy of any of these images as a print by either contacting me and I’ll also put the panoramic in my Peak District Photography gallery.

If you would like to visit places like this and learn how to take the best photos of the area, why not join me on a small group or 1-2-1 workshop?