I’ve been wanting to do a wild camp on Bleaklow for so long now. Most people question why, a baron flat place with not much to see or photograph but in my opinion that’s an unfair perception. There’s some really interesting spots including the kissing stones and the B-29 Superfortress and I have had some images in mind for some time now, particularly ones that were either in the dark or at sunrise, both of which requires navigating Bleaklow in the dark which is never a tempting prospect.

I had actually planned to wild camp in the Lakes but the forecast not looking great, it seemed better to finally get this one ticked off especially as there may be heather around (turned out there wasn’t) and it made more sense not to waste fuel/time for little or no reward.

I had decided that while a considerably longer walk and tougher ascent that it would be best to park at Old Glossop where the car would probably be safer left overnight. From the off, it wasn’t going to be my day. I took my bag out of the car and wondered why it was wet. Turned out that my new platypus had leaked due to not sealing the nozzle (something I hadn’t needed to do on the other one), luckily it was only the outside of the bag that had got wet. I had lost most of my water but had a travel tap with me so wasn’t overly worried.  So me and my friend started our ascent via Doctors Gate eventually turning off up one of the cloughsm, unpathed to Higher Shelf Stones. It was tough going over steep grassy ground but ultimately better than walking to the Pennine Way to come back on ourselves.

We pitched not too far from the Superfortress crash site but far enough away for it to not be spooky or disrespectful. There’s a certain chilling ambiance in the air around the crash site.

It was my second visit to the crash site and while you have probably read in my previous blog about it, just a short refresher for you those that don’t know about it.

“On 3 November 1948, USAF Boeing RB-29A Superfortress 44-61999, of the 16th Photographic Reconnaissance Squadron, 91st Reconnaissance Group, 311th Air Division, Strategic Air Command; crashed at Higher Shelf Stones, Bleaklow, whilst en route from Scampton to Burtonwood. All 13 crewmembers were killed. A large amount of wreckage is still visible, as a memorial to the crash. Also, a proper memorial was erected at the site in 1988.”

I decided to try and capture the site just before sunset, there were some clouds about which made a little change to my previous visit. Due to where the crash site is, the suns golden lighting quickly vanishes behind the hill way before setting so in theory you can catch a sunset after nearby, maybe at lower shelf stones. The sun vanished and it became cloudy, a good chance to do some long exposures with the big stopper I thought. However, here is an image with some nice light and clouds I managed to get: 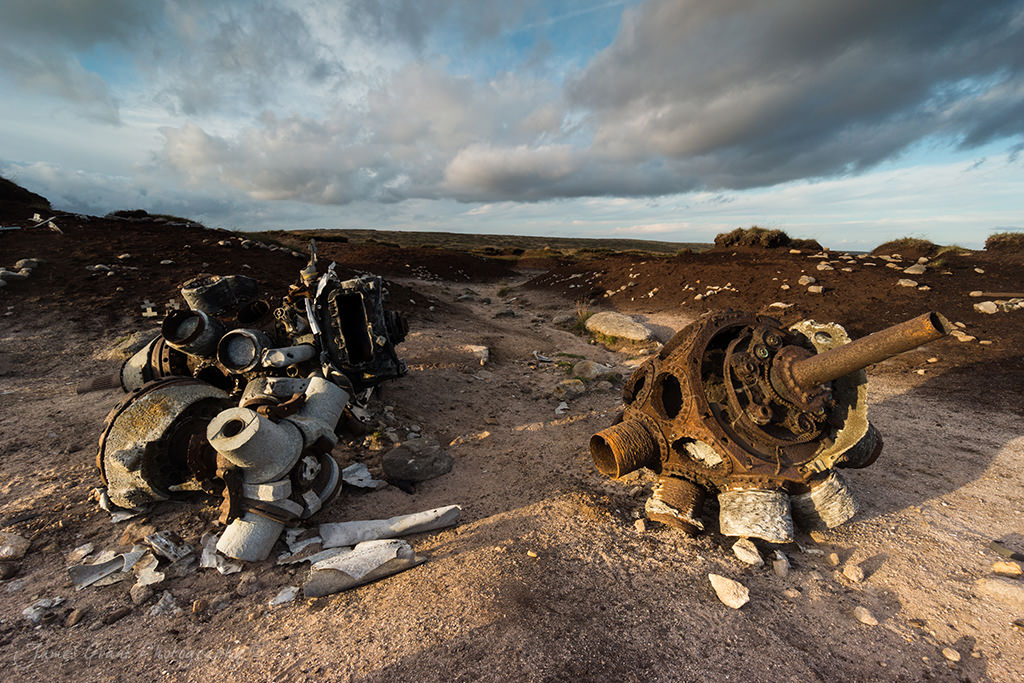 I got my new remote timer out of my bag, only to realise there were no batteries in it. Quickly I rushed back to my tent to fetch the head torch to put the batteries out of that in. So, that sorted I started to put the battery grip on, which the remote timer connects through (the only solution for the Nex 7) and it was the first time I used the grip. It wouldn’t work, there was just no power. I sat there confused trying different battery combinations to get it to work and couldn’t. I then tried putting the batteries back in the camera and it wouldn’t turn on. By this point I started getting frustrated because I knew I had charged at least 3 of the 4 batteries. I couldn’t work it out. Luckily my mate used the same batteries as me, he lent me one of his (although he only had two) and that worked. Mine wouldn’t work in his. Turns out once I got home that the batteries were fully charged but the grip was shorting them, causing them to act as dead until put in a charger again which would instantly say they were charged. Ownuser, the people who make the grip have sent me a replacement out straight away which was good of them.

After all that faffing about, we had lost track of time and then realised it was 10 mins before actual sunset. We literally ran over to lower shelf stones but missed perhaps the only light of the whole trip by minutes. A lovely red glow in the sky and some nice red light on the landscape. Damn!

In fairness, I was just happy to be out and about and wasn’t letting my series of unfortunate events get to me too much. My main objectives of the trip were still to come. I went back to the tent, had some tea, listened to some music with my mate and waited for it to get dark. Once night time was upon us, despite the really orange glow in the sky from the near by town of Glossop and city of Manchester we went to shoot the aircraft wreckage by night.

We spent quite a bit of time here, trying different compositions, always ever careful of battery life, light painting the different parts of the wreckage to try and capture something different. I thought it may be a little scary and disconcerting, being high on the moors at a site where 13 people had lost their lives but in honesty I find places closer to a town, next to a road a little more creepy in the dark.

Anyway, here are my efforts: 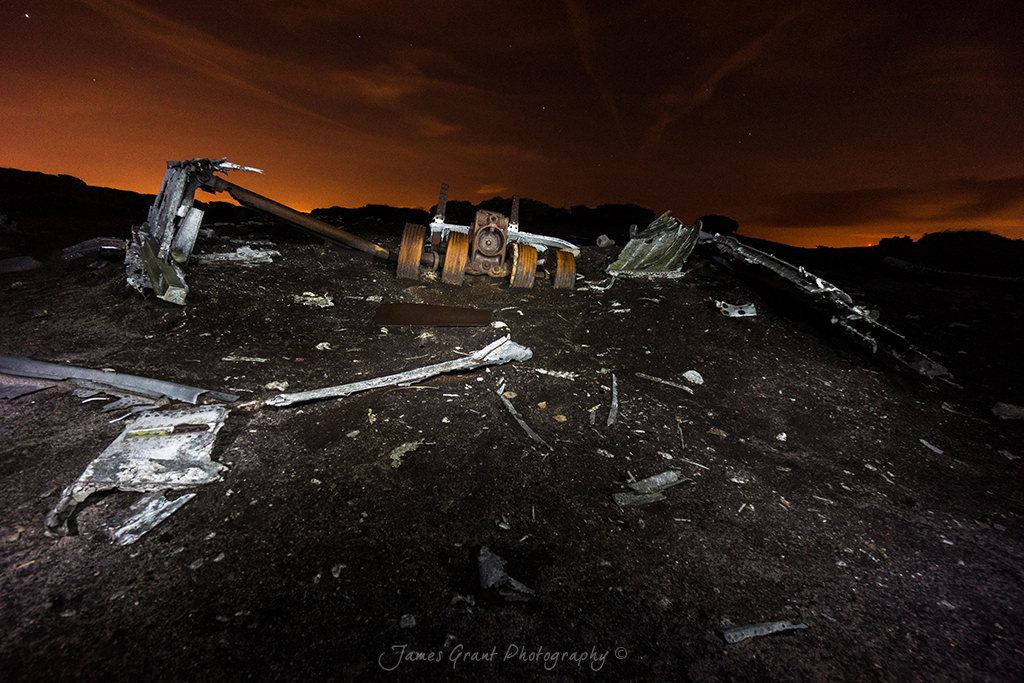 Two of the four engines: 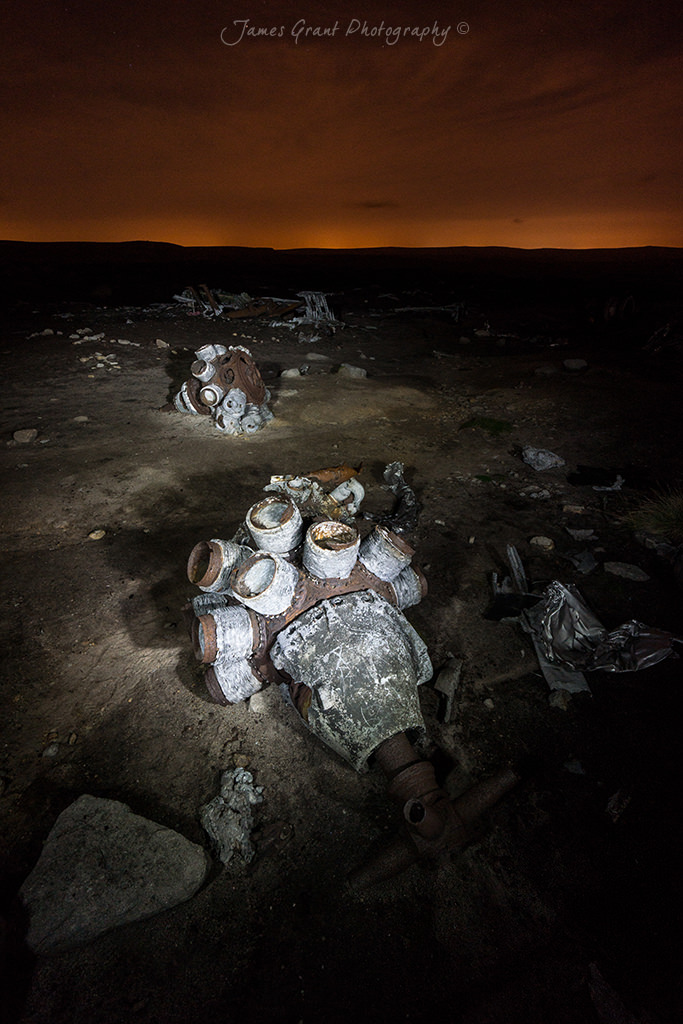 Perhaps my favourite shot taken, the American flag with a lot of memorial crosses at the wreckage. The flag bears the planes name on it “Over Exposed”, I thought it would be apt to light paint this for a little longer to make it brighter and over exposed in itself: 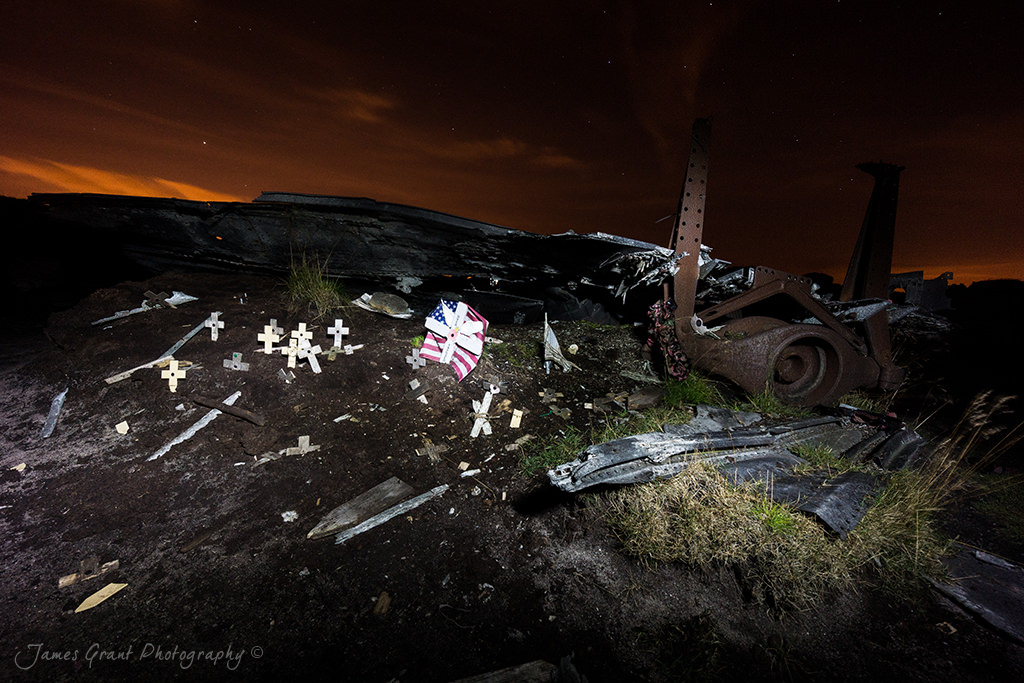 The last one of the radiator and the other two engines: 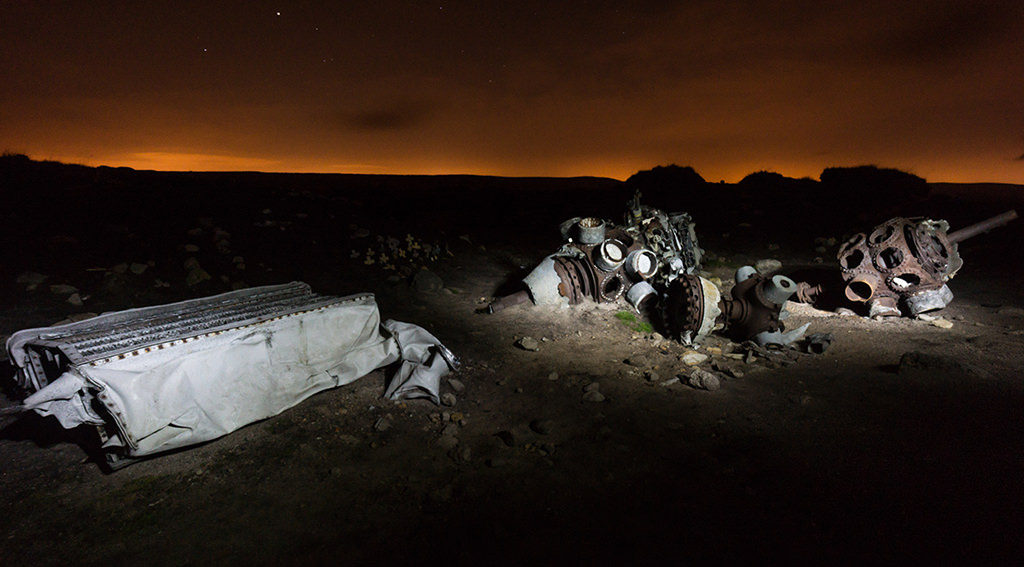 After this, it was off to bed for an early rise to try and catch the Wain Stones AKA the Kissing Stones at sunrise. The last disaster of the night was to happen though, while arranging my sleeping bag I managed to lean on my inner tent and ripped it!

Anyway, off to sleep it was. Up early the next morning it was about a miles walk up to Bleaklow Head then to go to the Wain Stones. It was quite dull and miserable with low mist cling to the hillside in places. Just before the sun was due to come up, in the distance the sky lit up pink but no compositions for me to make the most of it but we never actually saw the sun. I decided in the end, to go for a shot that would work well in black and white like so: 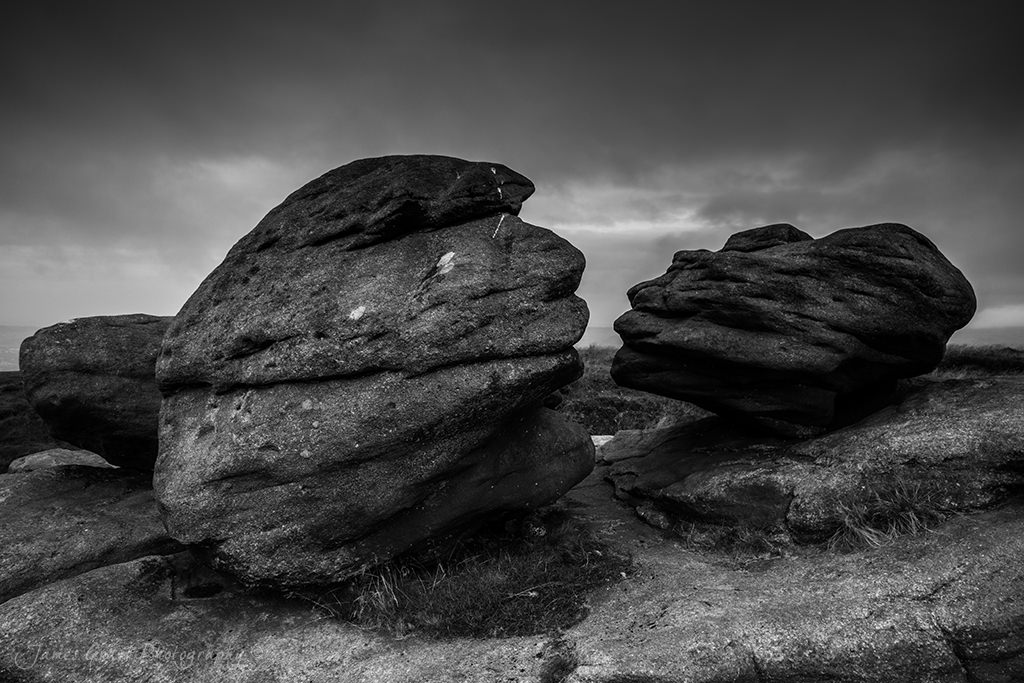 After that, it was time to navigate our way back to the tents, pack up and off we headed for a well deserved bacon cob in Glossop. Not a completely wasted trip and happy with the results.