Been a while since I’ve been able to blog due to being super busy. Anyway here’s a catch up blog from my Snowdon Wild camp I did on the 8th/9th June (time flies).

I had wanted to wild camp up Snowdon for some time now, years in fact. A mountain over 1000m high, with great views into the basin of the Snowdon Horseshoe, it was screaming out to be photographed, the fact that the mountain is a fairly easy ascent with kit on also made it more appealing. I also had a friend that had wanted to do it, so it was a case of finding a weekend we were both free.

It had been planned ages, something that is always a risk because you don’t know what the weather is going to throw at you but luckily on this occasion it was warm and fair with no too much wind. Perfect wild camping conditions. One thing we didn’t anticipate and it only dawned on me upon arriving was that being June there was to be lots of National Three Peakers on the mountain and with Snowdon generally being the last mountain for most it would mean they would be ascending through the night. Oh no!

Anyway, we set off determined to do it. For anyone who is wondering, parking is obviously limited and we had to park half way down Llanberis Pass and caught the sherpa bus up to Pen-Y-Pass . About a quid each way.

We had a gentle walk up reaching the summit just before golden hour, unfortunately there was a bit of a breeze and it took a bit of effort to pitch the tents in a tight spot (anyone who knows Snowdon will probably wonder how we managed to find a spot to pitch in the first place) which ate into our shooting time but fortunately there wasn’t much of a great sunset anyway. Very hazy but nice to witness all the same.

We went to bed and by this time the temperature had dropped massively, gloves required and everything. We tried to get a bit of sleep but the barrage of walkers coming up the mountain made it difficult. We woke up about 1am to do a bit of night shooting, it was obvious star trails were out of the question with constant head torches passing through the frame so it would have to be single frame shots of about 30 seconds.

One of the strangest things to witness was that the sun had never really set, on the horizon in the distance looking north was a strip of orange and green bands with noctilucent clouds surrounded by the inky black night sky. It was almost like a portal to another universe.

Anyway, what I thought would be good to do would be grabbing a tent shot under the stars. The milky way was visible by the naked eye but perhaps a little too much light pollution for it to turn out really good as a photograph. However I was still more than pleased with the resulting photograph, The biggest challenge I faced was actually grabbing a frame without a headtorch passing through. 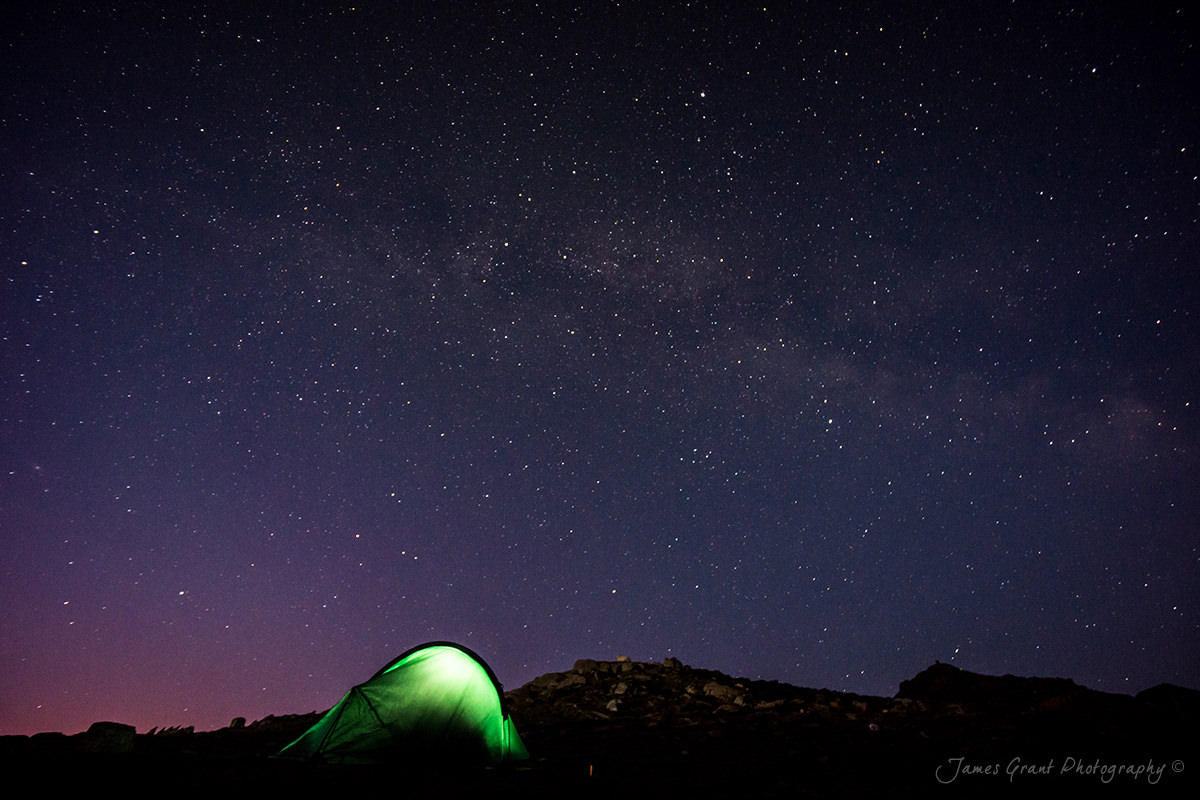 A Night Under The Stars – Snowdon Wild camp – Snowdonia Photography

I went back to bed and sleep continued to be scattered, every now and again I would hear people shouting “is that a tent? wow they must be mad” and one person even went “wow, camping up here, hardcore”….I lay there thinking I was the lazy one while these crazy people completed a huge challenge I wouldn’t dream of doing myself.

The next morning, I got up to catch the sunrise and after walking all of about 50m from the tent I was greeted to a lovely view down the basin with mist/cloud clinging to the valleys in the distance and the hills just poking out. For some reason, my sunrise calculator had got the time wrong and it actually rose ten minutes early throwing me out so I had to work quick. I got a few compositions, this is my first of the sun just coming up: 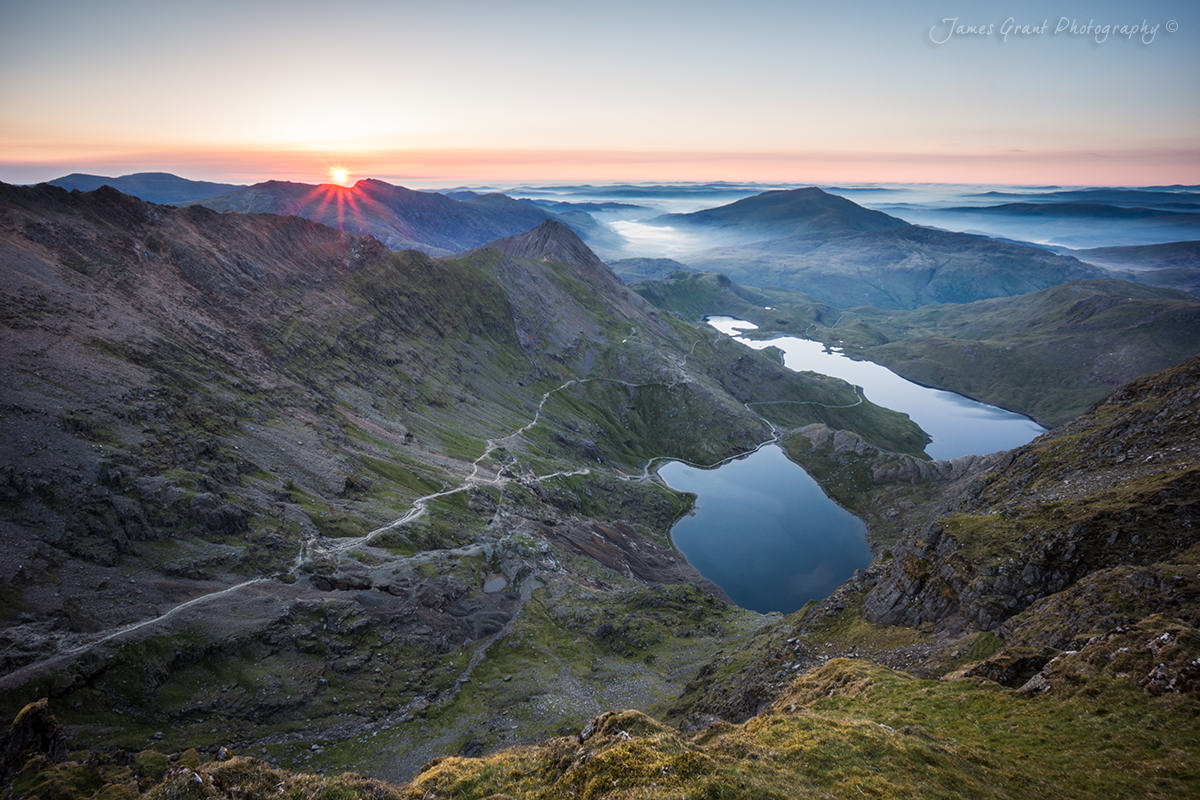 I moved on, taking various frames all the way down to the waypoint to turn down to the Pyg/Miners track, however perhaps my most successful image was taken half way between the summit and the waypoint and it was a panoramic (click image to view large):

Finally, I decided to have a walk to the other side of the summit to grab a different shot and bag an image of Y LLiwedd. Anyone who has completed the Snowdon Horseshoe will appreciate this mountain, with its imposing sheer cliffs but a fun scramble up the flanks however what most will agree with is the horrible descent down from the Snowdon summit via the Watkins path to get to Y Lliwedd. Anyway, here’s the shot, the light had got a bit strong but still casting a nice glow especially with the mist in the distance:

After all that, I started to head back down, it got very warm very quickly but thought I’d enjoy a nice day in Llandudno making the most of the warmth and grabbed a cheeky ice cream.

I hope you’ve enjoyed the images.