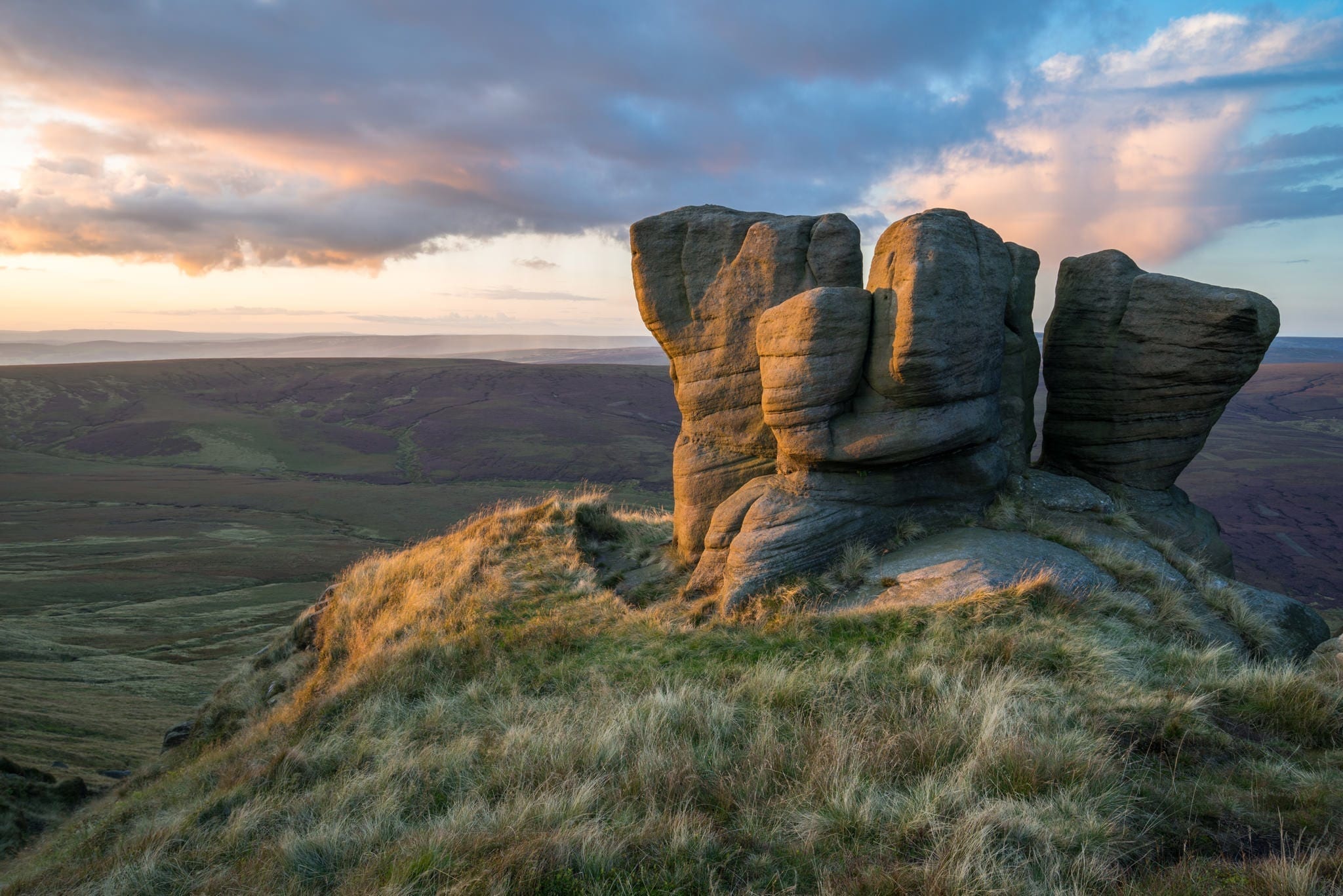 In a quest to keep revisiting locations I recently went back up to the Boxing Gloves on Kinder Scout. This amazing formation has weathered over millennia to create a formation that we can now associate something with. If you look closely, you can see the outline of a boxing glove or two.

I have probably walked past the Boxing Gloves many times over the years, more so when out on a walk rather than photographically. However, back in March with some snowfall I made a trip up there with Peak Expsosure. I hadn’t quite got the conditions I had hoped for and knew I had to return.

The Boxing Gloves are on Kinder Scout’s Northern Edges, which essentially means it’s a location to shoot from March 21st until September 21st (in theory) when the sun sets in a more Northernly position. Over the late summer I had concentrated a lot of my efforts on shooting the heather but as it was starting to die out, I checked TPE (The Photographer’s Ephermeris) to see where the sun would be and it showed it setting in line with the edge of Kinder Scout. In my head this indicated perfect side lighting but it only took a bit of land to be slightly higher to get in the way of that setting sun.

I spoke to Peak Exposure to see what he thought and he said I may be a little too late unless I got the early light. I knew essentially this would be my last chance this year to get the shot and so I set off with plenty of time.

I arrived at Bowden Bridge, Hayfield with plenty of time but a little later than anticipated. I made my way up Kinder Scout via Sandy Heys. This is by no means an easy way up but it’s the quickest. It’s probably just short of a hour walking up a steep grassy path but it gets the job done. On the way up the light was fantastic and I was gutted to not have more time. Kinder Reservoir was still and I was sure some drone footage would have been stunning.

Nearly at the top, I took a rare opportunity to stop and take some shots en-route. This is very rare for me, I very much like to have a target in mind and get the shot I set out for. This usually means getting there, setting up, put the camera on a tripod and simply wait for the light (if it ever comes!). However, the light was super good on the way up, especially as it wasn’t even inside the golden hour. Thick, stormy clouds lined the skyline with the sun just breaking through, highlighting the textures and details in the grass and rocks all the way over to the hills in the distance.

I stopped, took the opportunity for a breather and got the camera out. Rather than using my preferred shooting methods, I whacked the camera on auto-focus and handheld, took a few shots, only paying attention to my shutter speed. I spotted the small rocks hiding in the grass and decided they would act as a great foreground interest looking over Kinder Reservoir. 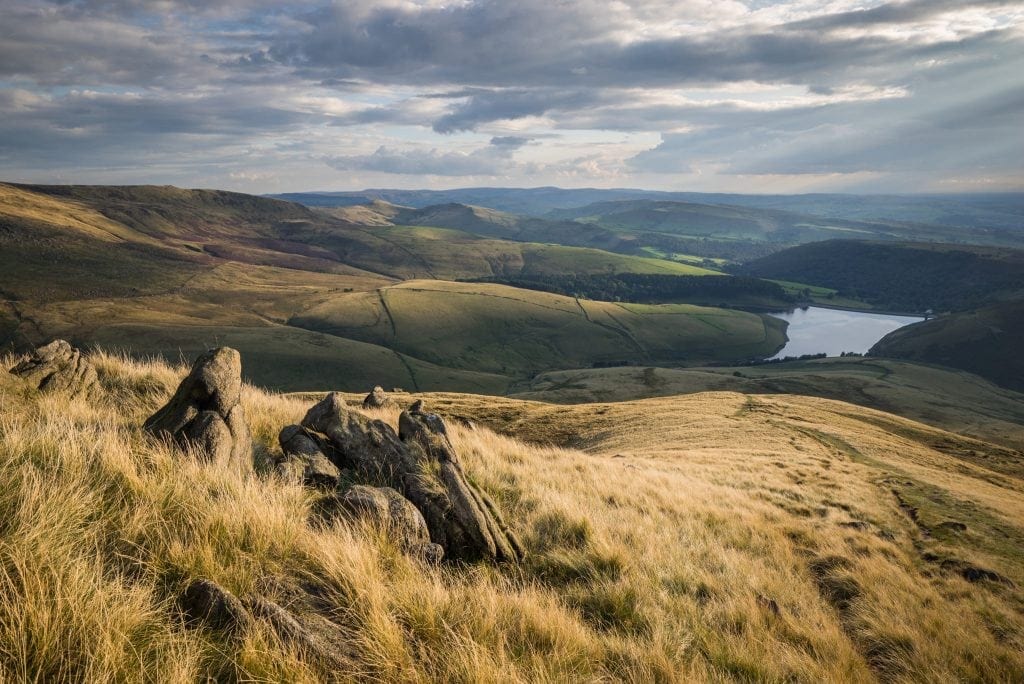 Moving on I made my way to the top of Sandy Heys before heading to the nearby trig point. From here, you need to head over the troughs and groughs to get to the Boxing Gloves. Unfortunately, I took a bearing from here from memory and headed over to roughly where the Boxing Gloves was. My sense of direction failed me on this rare occasion and I overshot them to the right by about a 100m. However, due to them sitting in a slight dip I couldn’t see them and decided to go further right (East) and almost ended up at Fairbrook Naze at which point I knew I had gone completely wrong. This wasn’t helped by the fact that the formation isn’t listed on the OS maps. I ran/walked back along the edge thankful for the extra time I had given myself, but also kicking myself as I wouldn’t get the amount of time I wanted up there to fly the drone.

I arrived with about 30 minutes to spare. The sky was looking great to the south, not the way I was shooting. To the north only two clouds had stuck around. Fortunately, they were dramatic and provided the perfect backdrop to Boxing Gloves and just what I wanted. The light was beautiful and the sun was setting in my opinion in the perfect place. The sidelight was beautiful and it even turned red as the sun got to the horizon. I much preferred this earlier shot though where the light was still warm but a little fresher with more direct light on the grass below. 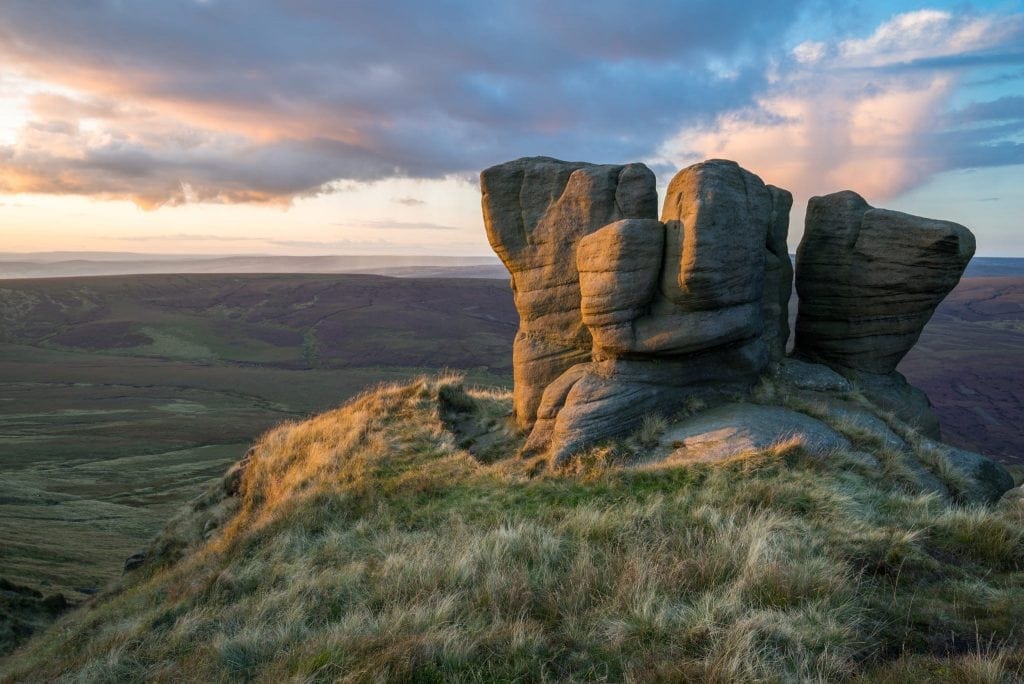 Finally, I did manage to send the drone up a few times in between shooting. I was after a particular shot. I had always envisioned taking a shot of Kinder’s groughs from above, showing the detail and patterns of this amazing landscape. Recently, Moors for the Future has done a lot of work on Kinder and where peat and water used to be, grass now dominates. This is the effect of controlling where sheep can graze and also damming the groughs correctly. 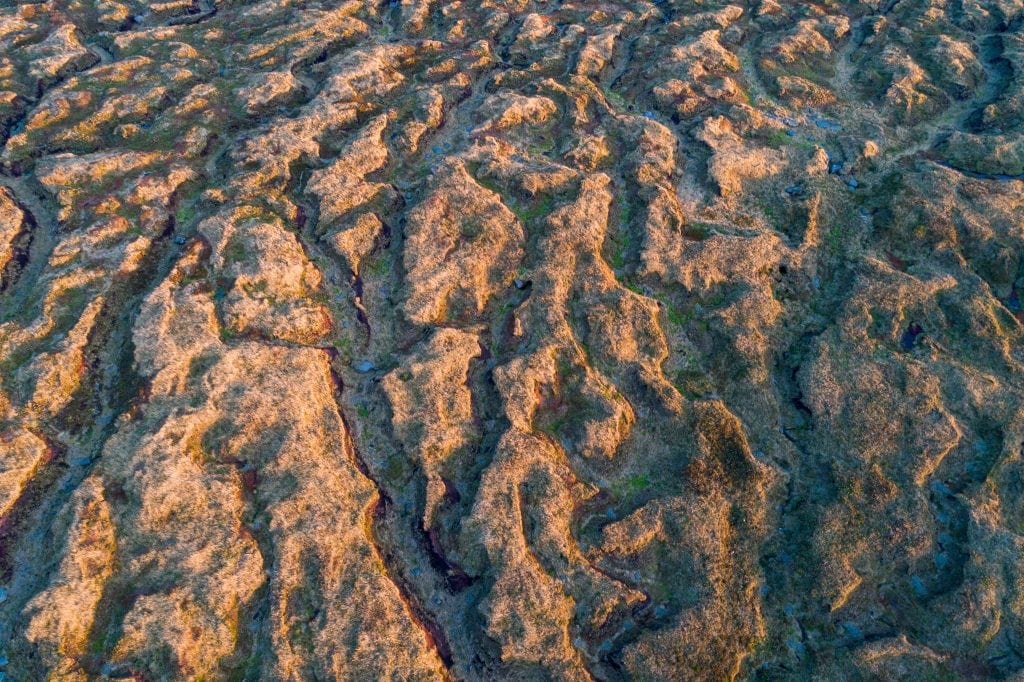