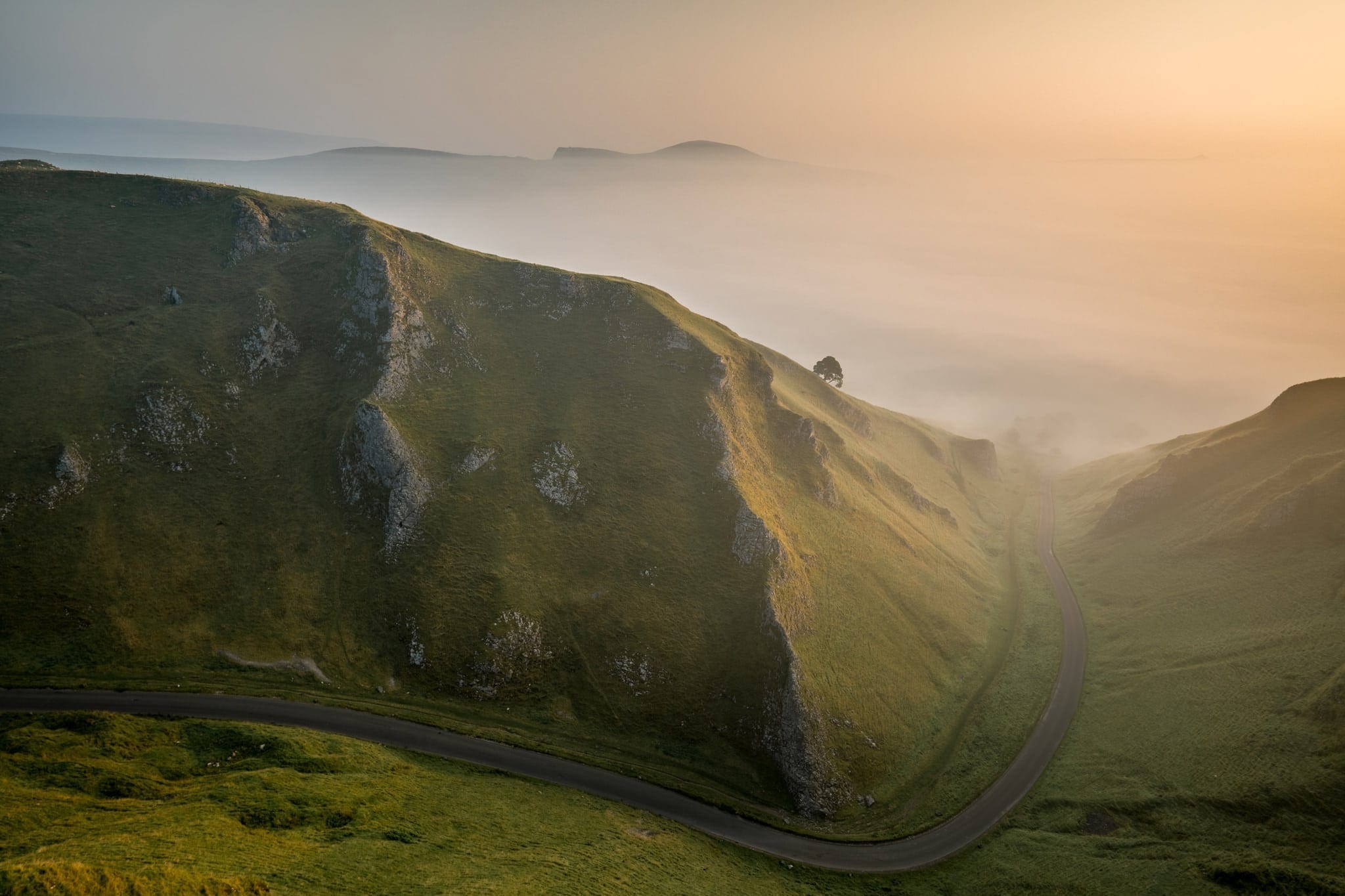 Last Thursday saw me up bright and early for a sunrise at Winnats Pass and my first Peak District sunrise since Spring. They are getting a bit more sociable you see?

I had been out a few days before scouting a location in the White Peak and thought it would possibly work at sunrise with a bit of fog/mist but it would also take the sun a fair while to get high enough to illuminate the foreground. I had every intention on going there but as I woke up and saw a really thick fog I decided the pull of Winnats Pass would suit me better. I had no idea if I was going to get above the fog and going to the White Peak can be a bit hit and miss and you’re better off with a bit of mist in my opinion.

It had been a really hot day the day before but it hadn’t cooled down loads overnight. When it cools rapidly, this is usually a good shine for some fog/mist with hopefully a certain clarity to the air, so I wasn’t sure how the sunrise would play out. Driving along I couldn’t see the usual signs of a good morning, the fog was thick and a little higher from the road than I would usually expect. On top of all that, I didn’t get any breaks to see the night sky on my way all the way from Matlock to Castleton and usually I do, especially through Chatsworth.

I had set the alarm a hour early for this exact reason. While I had Winnats Pass in mind, I knew I needed time to change my location should it not be ripe. I would likely have to go high. Fortunately, about a third of the way up Winnats Pass I suddenly came out of the fog for the first time and knew I’d be going here. I parked up, finished my brew and looked around to the stars. It’s very rare I get to a location for sunrise before twilight, I usually can see the glow on the horizon but not today. I could however see a bank of hazy cloud on the horizon and looking at the fog, it also seemed hazy and undefined. At this point I was thinking it wouldn’t be anything special. The Hope Valley is a magnet for fog and after many mornings above it, I can usually read the signs of a good morning.

I wasn’t the only one up early though. Looking over to Mam Tor I could see the motorway getting busier with head torches forming a line to the summit. Mam Tor is busy at a weekend but I was surprised for a Thursday. Maybe the sunrise was just early enough for some going to work to get out before. I’m glad I didn’t have to divert as it’s always a struggle on Mam Tor to get the composition you want without getting in someone else’s shot.

Anyway, I made my way to Winnats, realising my headtorch had died while being in my bag, so it was a walk in the dark but fortunately I knew the way pretty well despite not being here for a good few years. This was actually my first time here for sunrise which has shocked some people, but I quite like it at sunset. Also fortunately, the nettles have started to die back and combined with thick trousers I didn’t suffer too much.

Winnats Pass has been transformed into somewhat of an icon of the Peak District in the last few years, appearing in TV adverts, in marketing campaigns etc. When I first photographed here, it was a place that hadn’t been shot much but now days, especially at sunrise, you’ll likely bump into someone. Funnily enough, I did bump into Uldis Knakis, well sort of. Getting there so early, I got myself into the prime spot by the limestone pinnacle and Uldis milled around other spots, probably not wanting to disturb me (or he thought I might bite). We had never met, but I have been following his excellent work for a few years now, but we didn’t actually realise who each other were until after!

Anyway, as I said before I started rambling on, the morning looked like a hazy one and I wasn’t wrong. I had been waiting around for almost a hour, fumbling with a loan camera finding out my infrared remote had broken as well as my cable remote, so it was a tricky morning trying to exposure bracket. The sun finally broke through but came through weak. I could barely see the distinction between the fog and the sky.

It actually took until near the end of golden hour to get any decent form of lighting, but these are some of my efforts.

The first is looking down the pass from one of the cliff edges. I liked the sweep of the road vanishing into the fog as well as the hazy orange sky transitioning to blue. It’s probably one of the lesser seen compositions from Winnats Pass too, which I also like.